Minute to Win It, provided to me by Capcom, is a new iOS game based on NBC’s television program. The game features a variety of one-minute challenges / mini-games. From the graphics and sound to the system of unlockables, the game is very polished. Unfortunately, the challenges are too challenging! …At $1.99, many gamers will likely find themselves frustrated over the challenges. Minute to Win It is available now on iTunes, and if you’re up to the (extreme) challenge, you’ll likely enjoy the game. However, if you’re like me, you may want to see if Capcom tunes the difficulty down a bit.

If the game is patched to become easier, I suspect I’d come back to play more of it. The structure is great, but the the challenges are too hard given the touch controls.

Migrating from the Penny Arcade Forums, here is my latest attempt to chronologically place every video game. I am currently in the process of transferring all of this data onto a spreadsheet, but here is the straight list in the meantime. Any omissions, misplaced entries, or games which just shouldn’t be there? Be sure to let me know. Thanks for participating with me in this Herculean and maybe impossible endeavor.

Gorblax of Select Button has compiled a chronological list of as many games as he can based on the setting of the game rather than the release. Why? I have no idea. But I guess it’s interesting to note that Diablo, Diablo II, and Lord of Destruction took place over 1263 to 1265. The project seems worth noting just for how much work Gorblax must have done to compile the list. 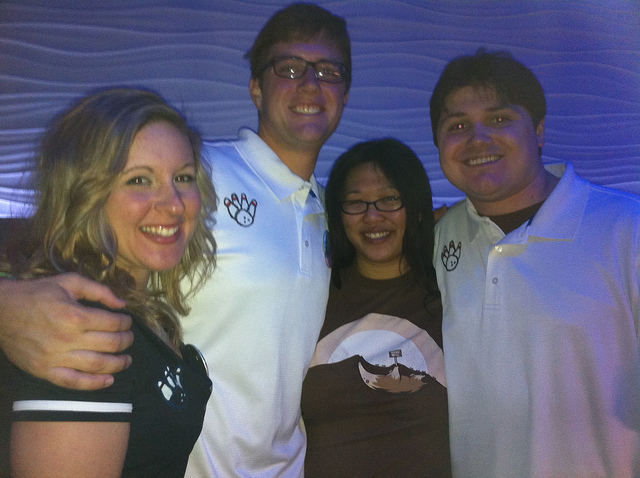 We went bowling and played pool in honor of the happy couple! It was a lot of fun. Now it’s time for work =/ Do you like Alex’s side pony tails? I know I do!

The bitch is stupid and ignorant, but this guy is hilarious and awesome.

Pokémon White Version
I started playing this recently, and it’s been enjoyable. It feels like a reboot of the series. It features all new pokemon, and no old ones will be encountered until after the defeat of the Elite Four. The starters seemed cool, and you your pokemon before even leaving the first room. Unforunately, you can’t trade until after the first gym, so getting all the starters would be difficult. You learn to run pretty quickly, which is nice. I’m not sure why you can’t just start the game with the ability to run though. This seems like a bad design decision. The professor tells you about “someone’s” PC early on in the game, and then within abut about a half hour, you meet this “someone.” It also seemed like a chuckle and nod at that old series staple.
My only complaint so far, and it really isn’t the game’s fault, is that I can’t stop grinding for the correct nature. It’s so time consuming and annoying, but spending countless hours training a pokemon of the wrong nature sounds horrifying. I’m about ten hours into the game yet I only have one badge.
The villains are Team Plasma, an organization who denounce mankind’s enslavement of wild pokemon. They seem sort of… right on, actually.The game also features C-Gear, which is the in-game tool you use to play with others. What’s interesting is that it uses an always-on approach to see who’s playing near you. I’d rather conserve battery life myself though. Also, they seem to have removed the underground, which I enjoyed, and replaced it with the Entranet and Dream World, which I either dislike or don’t fully understand.
World of Warcraft: Cataclysm
Playground Brigade is now 5/6 Blackwing Descent, 2/4 Bastion of Twilight, and 1/2 Throne of the Four Winds. We’re also not raiding anymore. We also cleared up to General Vezax in Ulduar, which was fun. A lot of the guild hadn’t seen much of Ulduar. For some reason, General Vezax never spawned. We did, however, defeat Algalon the Observer, which was awesome. I got the Reply-Code Alpha and started the chain for the key. With 4.1 on the way, I really need to get working on at least finishing Mount Hyjal. I’m also still one heroic short of Cataclysm Dungeon Hero.
GTA4: The Ballad of Gay Tony
I’m only a few hours into this game still because gem likes to be there when I play it to watch. I’m enjoying it so far though. In the latest level I played, I got to steal a military helicopter and then use it to blow up a yacht and some smaller boats. Pretty fun.
Super Meat Boy, The Force Unleashed II, and Beat Hazard
Here are three games that I was playing a lot previously but haven’t played in a while. I definitely want to get back to the first two. If I don’t get back to Beat Hazard, I at least reached the maximum rank already.
iOS: Infinity Blade, Doodle Lab 101, and Angry Birds
I purchased Infinity Blade recently, which is an interesting action-RPG. I need to put more time into it though to see how it holds up. I’ve also been playing Doodle Lab 101, which feels like a simple little Flash game honestly. You have to draw paths for differently colored bouncing balls to reach the correct goal. You also have to combine the balls to create the right colors. Lastly, I’ve been playing more Angry Birds. It doesn’t deserve all the hype it got, but it’s fun.
To Play Later
As usual, there are a lot of games I’d like to get around to playing. I started both Demon’s Souls and No More Heroes 2 but didn’t put too much time into them. I should finish up BlazBlue and Guilty Gear XX^Core Plus as well as play BlazBlue: Continuum Shift. Marvel vs. Capcom 3 also looks pretty fun. Mad World, Blue Dragon,Guild Wars, BioShock and Viva Piñata are all games that I own and have played but never finished. Ratchet & Clank Future: Tools of Destruction, Odin Sphere, killer7, Psychonauts and God Hand are games I’ve wanted to play but haven’t yet I own them. There’s also the latest Layton, the rest of the Phoenix Wright series, Super Mario Galaxy 2, Donkey Kong Country Returns, Epic Mickey, Lost in Shadow, and Armored Core: For Answer. And then there’s an itch to play a shooter – maybe Resistance, Modern Warfare 2, Black Ops, or the newly released and negatively reviewed Homefront. The 57 and 79 are different busses. My mistake. Fantasy & Science Fiction magazine was too interesting for me to notice for a while. This Coco’s is not where I live at all! 🙁 Thank God for Collin. I like riding the bus. I don’t always needing to take the bus, but for some reason, it seems like a chance for me to reflect and to consider those around me. I like to wonder what the lives are like of the other passengers and the driver. Riding the bus isn’t the worst thing in the world by far, but here, you’re not supposed to be on the bus. You should have a car. If you’re on the bus, something’s wrong. I like to wonder what’s wrong.
For a portion of my bus ride, he bus is filled mostly with UCI students. For them, nothing’s wrong with this, but once they get off near UCI, then things have changed. Usually there’s a few asian girls who don’t speak English very well and have trouble figuring out how the bus works. They bother the driver slow us down. I wonder where they’re from and what they’re doing here. Then there are the senior citizens getting groceries. I like to wonder about their lives. They’ve been alive so much longer than me. Being old doesn’t inherently mean deserving of respect, but they definitely have a lot to tell me about if I took the time to listen. And then there are the everyday people going to work or returning home. I wonder if they’re happy in life and why they have to take the bus.
Yesterday I Was watching the date scroll by on the little sign on the bus. Suddenly the fact that the day’s date was unique and would never exist again after today popped into my head. March 4, 2011. It only happened once. What did I do with March 4, 2011? I woke up, rolled around in bed for a while, and generally fought the beginning of the day by trying to remain asleep as long as possible. Next I screwed around on the Internet. Man, what minor changes are being made to World of Warcraft? Yeah, there was something about ZG and ZA. I needed to know. Did my friends do anything interesting and share it on Facebook? Did I get any good PR announcements for Game-Boyz? No, I didn’t. Got to scroll through reblogged photos by Nicole and Blair to search for written posts. Did Alex share any sweet Back to the Future photos? I wonder if my favorite author, John Scalzi, has anything new on his blog (he always does). Okay, okay, time to shower. And after I shower, I go get greasy Del Taco with Andy. Del Taco, like I have four or so times per week. Then I walk to the bus, sit down, and watch people while reading my book, Zombie, Spaceship, Wasteland by Patton Oswalt. And finally I reach the bookstore, where I do the oh-so-important, irreplaceable job of ringing people up and telling them where books are. Good bye March 4, 2011. I should really put you down in the history books for what good use of you I made.
It just suddenly seemed strange and kind of sad that time is limited, but I spend it so worthlessly, like most people do. Not that I’ll change this. There are tons of unique, exciting experiences out in there world. And they’re ready to make my blood pressure shoot up, give me headaches, and cause me stress. Why try something new?