Saturday was Jackie and Kenneth’s wedding. It was beautiful, and the weekend was fantastic. I’m tempted to start talking about the actual wedding, but I’m getting ahead of myself.

We left Southern California early Friday morning at 6:00. We had some quick breakfast, stopped for coffee, and then headed north on the 101. The 5 would have been faster, but we opted for the more scenic route along the coast. Not only did the drive provide ample time to talk, it also allowed us to listen to many episodes of the podcast My Brother, My Brother, and Me. We stopped at the Madonna Inn because gem had heard of it. It’s apparently a landmark of California. At least, that’s what Wikipedia tells me. It’s known for an exterior that’s reminiscient of the Swiss Alps, 110 guest rooms and suites with unique themes, and a waterfall urinal.

The coolest part, I suspect, are the themed rooms. Unfortunately, I couldn’t really see those without paying for a room. The exterior was neat looking though. The waterfall urinal was… a little gross. It was basically a couple drains in the ground with some water running over a fake rock above it. I didn’t really want to get splashed.

They did, however, have some extremely cute chocolates for sale. You can see what I bought in the photo above! There was a lemon ladybug, an orange ladybug, a strawberry ladybug, and a chocolate lamb. I also got a chocolate heart flavored with some sort of alcohol. They were all quite tasty. We decided to look in the surrounding area for lunch. It just seemed like a cool area at which to eat. I didn’t realize it at the time, but we were in San Luis Obispo. We looked around for a bit before settling on Creeky Tiki Island Grill. It was a nice little place with great outdoor seating near a creek. It was really nice. The food was pretty tasty – I had a BBQ jerk chicken pizza, and gem had a great salad (and they were willing to accommodate a special order). We also had a chance to play with gem’s new camera! 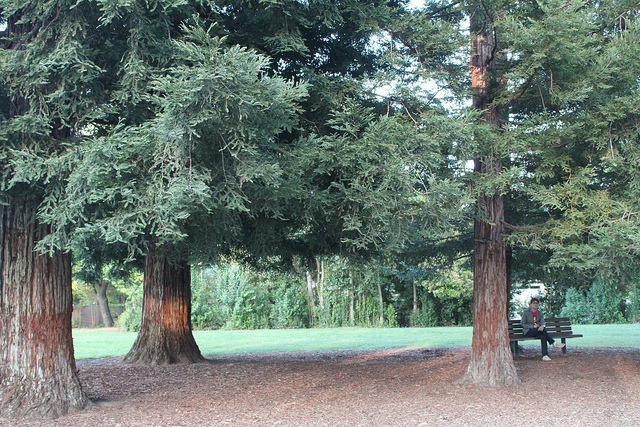 After getting off in Santa Cruz by accident and driving around, we finally made it to Los Gatos. It was about 5 o’clock when we checked into the hotel. We were originally hoping to do a little hiking, but it was too late for that. We also wanted to grab dinner or drinks with a couple friends, but we couldn’t make it happen. Instead we went for a walk through a park and around a neighborhood. The trees were definitely pretty!

When we had our fill of walking and got hungry again, we decided to drive to San Jose to check where gem needed to go the next day. We went to Santana Row, which was a large shopping center. It was really packed – exactly the type of place I’d usually avoid on a Friday evening. We ended up going a few blocks away to A Slice of New York for pizza. Yes, I had pizza again. Their gimmick is authentic New York pizza. It was good pizza but nothing amazingly special. After dinner, I crashed pretty much immediately. It had been a long day. Saturday morning we grabbed some breakfast before gem’s appointment at Dry Bar in San Jose to get her hair done. It seemed like a nice enough place. gem told me that her stylist mentioned that some people come to get their hair done multiple times per week. One wash, and the work is undone. It seems odd to get it done regularly, but for special occasions, it makes sense. Her hair looked great! We had lunch at Blowfish Sushi to Die For in Santana Row. They didn’t have blowfish. Odd! They did, however, have something called the Ultimate Spicy Tuna consisting of spicy tuna, diced jalapeños, spicy sesame oil, fried jalapeños, habanero tobiko, spicy mayo, and Sriracha. It must be really spicy, right? Wrong. Zenko Sushi’s spicy tuna was spicier. It was still tasty, but why bother promoting it as “ultimate spicy” if it isn’t really spicy. I’m not even sure it was what I’d call “white person spicy.” We hurried back to the Los Gatos Lodge to take the shuttle to the wedding site, Nestldown. It was a beautiful location. You can see one building in that photograph. There were flowers and tall trees everywhere. I suddenly didn’t mind that I hadn’t had the chance to go hiking. There was amazing nature right here. We also ran into some friends that we hadn’t seen in a while. I wish we had had more time to catch up! A path led down some wood steps to the edge of a lake where the ceremony was to be held. I took a few photographs and chatted while waiting for the ceremony to begin. This is no surprise, but Jackie looked beautiful. Her entrance involved the same stairs I mentioned. I wonder if that was an extra bit of stress. Not only were all eyes on her, but she had to walk down the steps in her wedding dress. Of course, she descended gracefully. 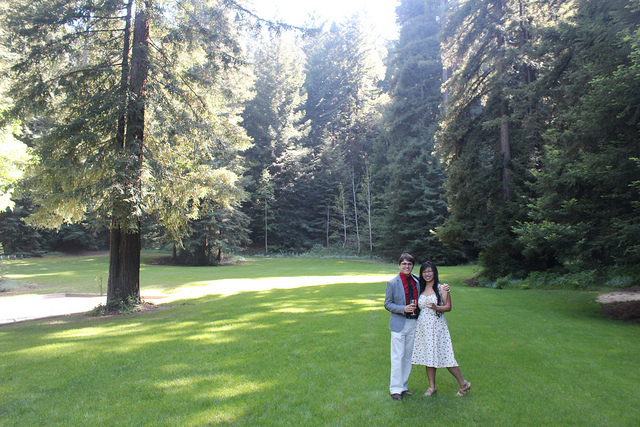 After the ceremony, it was time for some socializing and food. Our friend Joseph took this photograph of us as we waited for the train. 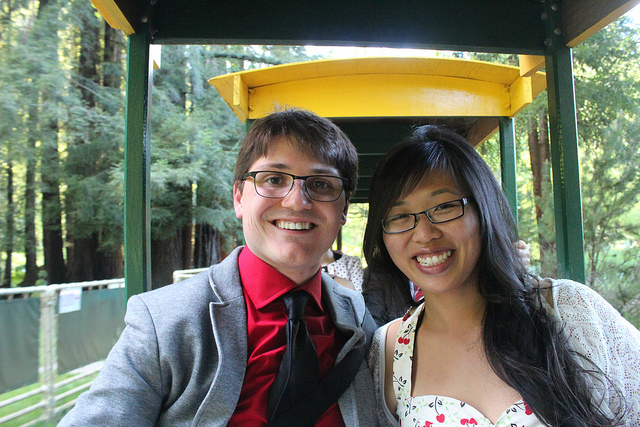 Did I say train? I sure did! gem said it’d be like playing Pokemon Snap; we could take pictures of wild Pokemon as we went along the track. Sadly, I didn’t see any Pokemon. We had some cheese, crackers, and wine near another lake and chatted with our new and old friends. 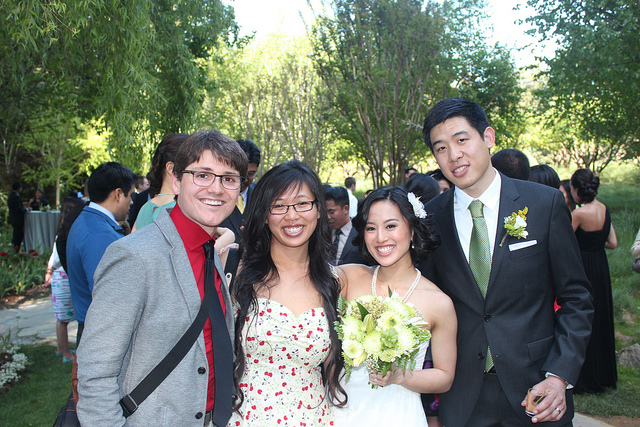 The happy couple arrived via the train and made their rounds talking to the guests. We took some photos together; I’m happy to have the physical reminder of the memories.

There was also a photo booth, complete with props. People who know gem would probably not be surprised to find that her favorite was the mustache on a stick. At dinner we received cards with name tags attached. The color of the card indicated our meal, and the name tags were labeled bottlecaps pinned to the cards. gem had the salmon, and I had the stuffed bell pepper. Both were quite delicious! We sat at the same table as Mai, which gave us a nice chance to talk. Dessert consisted of the wedding cake, a pineapple cake, and Oreo milkshakes that I didn’t know about until much later

With dinner came dancing, which was a lot of fun. There was modern music along with older dance tunes, and it was all great. They did a wonderful job selecting music. We even danced to Gangnam Style, of course.

As the evening came to a close, we headed back to the Los Gatos Lodge. We hung out and chatted while some people made an effort to finish the beer. I wasn’t interested in the beer, but I was definitely interested in talking with friends. Sunday morning we had brunch at Hobee’s Restaurant. Oh my god. It was good. I had an orange swirl French toast sandwich with sauteed streusel bananas and toasted almonds. I also tried some of gem’s chicken, artichoke, mushroom, spinach, and cheese omelet as well as some blueberry coffee cake. Jackie’s parents also thanked people individually for coming. They were very friendly, and Jackie’s mom reminds me of her. After brunch, we walked back to the lodge for the final time with our friends.

Goodbyes are always sad, but they have to be said. We exchanged goodbyes with Jackie and Kenneth, Jackie gifted gem the mustache on a stick, and we left for Orange County. This time we took the 5 instead of the 101. When we reached the Grapevine, I saw fire in the distance. There actually was a fire to the side of the road. Luckily it seemed under control, and I don’t think there was much damage.

By the time we got back, the day was done. I crashed quickly once again.

Congratulations again to Jackie and Kenneth! They’re great people and are both very lucky. They’re also both wonderful hosts. Hopefully we see them again soon.

2 thoughts on “Jackie and Kenneth’s wedding!”