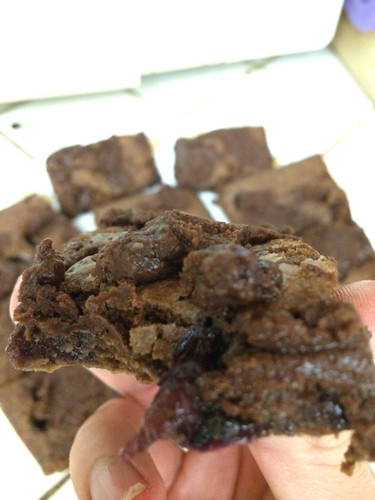 Did I ever mention that I baked blueberry brownies a couple weeks ago? Nope, I forgot about them. I always like blueberries with my chocolate yogurt at Yogurtland, so it seemed like a natural progression. They’re ugly, but I swear they were good. 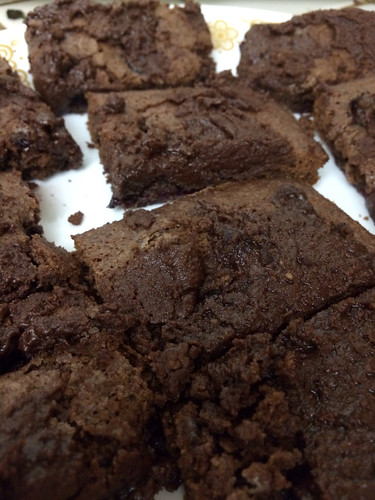 I also gave some to gem to ship along with her cookies to some friends for their birthdays. Sharing is caring. gem mentioned to me that she’d like me to bake a cake for her birthday a few weeks ago. I’m not sure if she was expecting me to really do it or not, but I’d been wanting to bake a cake so I went for it. She likes turtle cookies, so I decided to make her a turtle cake, which is chocolate with caramel and pecans. I based it off the recipe Turtle Cake II from AllRecipes.com. I took the recommendations from the comments and used 1/4 cup butter and 2/3 cup evaporated milk instead of 3/4 cup butter and 1/2 cup evaporated milk. I also used a German chocolate cake mix that included pudding rather than one without as specified for the recipe. I don’t really even know the difference, but I couldn’t find one without. However, I actually felt bad about using a mix anyways. It seems like cheating. Oh well. Here’s a shot of the middle layer of caramel, toasted pecans, and caramel. It’s spread atop the first layer of cake. Thanks to my friend, Hal, for recommending I toast the pecans first! It smelled great as they toasted. It looked pretty tasty to me before I even frosted it. Nevertheless, I frosted it and added some caramel decoration to the top. I wrote a birthday message on it, but in retrospect, I chose a bad color. 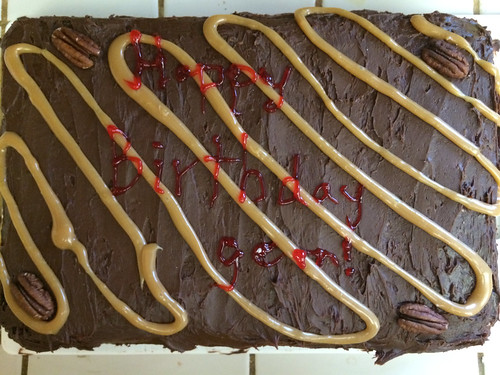 I should have chosen something with a higher contrast against the dark chocolate. I also added a few pecans to the top to give a better indication of what’s in the cake. Of course, it needed some star candles too!

It turned out delicious. More importantly, gem liked it too. Success! Happy Valentine’s Day! My Valentine was Alakazam Comics! Okay, it actually had nothing to do with Valentine’s Day, but I went to check if I had anything to pick up. The clerk usually asks for my name, and I just give “A-N-A-R.” One in particular always asks in a way that implies he’s trying to remember even though I never expect them to know my name. However, today he said, “it starts with an ‘A’, right?”

I was pretty surprised honestly. And then I was more surprised because I didn’t realize that Serenity: Leaves on the Wind had released! It’s the first Serenity comic (or any media) to depict the events after the film. Sweet. In unrelated news, I also reorganized my bookshelves. They fit a lot more books when the books aren’t placed all haphazardly.

Besides that, I also played some games, watched some TV, and watched Smokin’ Aces. Fun day.

Exciting news! John Scalzi’s novel, Redshirts, is set to become a series on FX. Redshirts is about a group of red shirt-wearing people on a spaceship that realize they’re always the ones to die and that their lives follow strange rules. Eventually they realize that a TV show from hundreds of years earlier seems to be ruling their lives. It was a very fun novel, and I’m looking forward to the TV show now!

Scalzi seems to have a lot happening. Old Man’s War, another of his novels, is being made into a movie. In addition, he did the writing for an upcoming iOS first-person shooter called Midnight Star and its interactive graphic novel tie-in, Midnight Rises. And we can’t forget that he’s one of my favorite authors and bloggers. There’re lots of Scalzi-related things about which to be excited!

I read 32 books last year according to Goodreads. Boy, a lot of it was crap.

Six books were for teens – Ally Condie’s Matched trilogy, the last two novels of Marie Lu’s Legend trilogy, and a novelization from Surviving High School (the iOS visual novel I play a lot) by M. Doty, How to Be a Star.

Thirteen were actually episodic releases of John Scalzi’s The Human Division. It was later released as one novel.

Two were based on World of Warcraft – Vol’jin: Shadows of the Horde and Stormrage.

The other eight were more substantial – The Ocean at the End of the Lane, John Dies at the End, This Book Is Full of Spiders, The Time Machine and the Invisible Man, The Metamorphosis and Other Stories, Alice’s Adventures in Wonderland, and Journey to the Center of the Earth.

I’d talk about which ones I liked, but honestly, I really enjoyed a lot of them. It was nice to see John Scalzi return to his Old Man’s War universe with the Human Division, and I really liked the episodic release. John Dies at the End and its sequel, This Books Is Full of Spiders were both fun. I really loved Kafka’s stories, as weird as they were. And what can I say? I’m a sucker for teenager dystopian novels. Lobstermen?! This show sounds fantastic! I’ll admit, it also made me think of the Aquabats. They’ve totally fought a lobsterman.

Unfortunately, Lobstermen is not about lobstermen. It’s just about normalmen who happen to like lobsters or something. Totally lame.