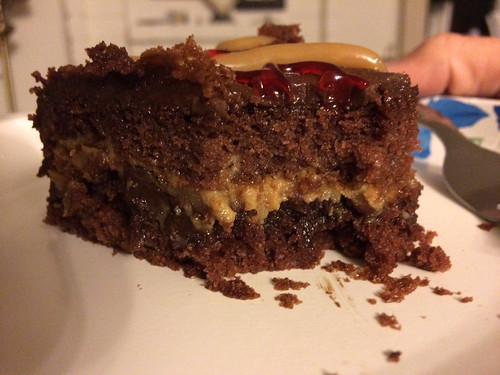 There were lots of things happening last week! Saturday the 22nd was gem’s birthday. I baked her a turtle cake, which I talked about previously. She and Edward came to my place for cake before we went out to celebrate. gem wasn’t sure what she wanted to do ahead of time, but she decided to go to Color Me Mine. 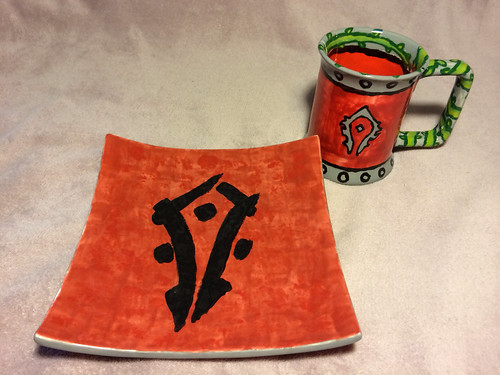 I painted a Horde (from World of Warcraft) plate to go with my Horde stein. I had actually painted the stein years ago, but it broke during the firing process and I never got around to fixing it. Luckily the people at Color Me Mine this time told me that if I brought it, they’d glue it together for me, which they did!

After painting, we wen to Gen Korean BBQ. We got there just before last call, so we were trying to order a bunch of food. The waiter was nice enough to just pick stuff for us, and he placed a big order. We were all stuffed, but we managed to get through it.

Sunday morning Collin and I went to Newport to eat at Zimzala. It was fairly empty, but that just meant that we got to hear some rocking tunes from Danny Maika and make a lot of requests.

Later that night, I went to Zenko Sushi with Anela and gem for the weekend’s second all-you-can-eat meal. We had a nice time!

By Monday I had gained 4.70 lbs since Friday. That was expected. Unfortunately, I felt a little sick, but I didn’t think much of it. Monday night Duncan treated Collin and me to Chipotle. It was fun eating with them. We brought it back to the house and watched… uh… Twitch Plays Pokemon on the living room TV.

I guess Chipotle was the last straw for my stomach. Something made me pretty sick, and I was up most of the night. I ended up calling out sick Tuesday and Wednesday. On the plus side, I lost all that weight I gained and much more! Tuesday morning I still tried to eat normally, but my stomach rejected everything. Even my mouth rejected normal foods! I chipped a tooth eating a protein bar. I should note that the protein bar isn’t crunchy in any way. 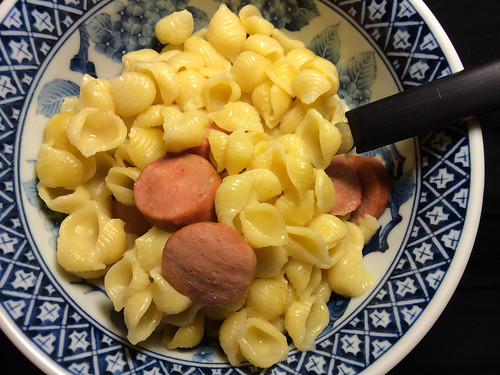 gem recommended I make soup, so I did just that. My stomach didn’t seem to hate it, so I ate it Tuesday night, all day Wednesday, and early on Thursday. 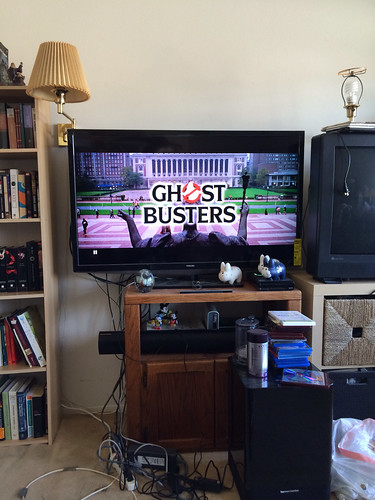 I was still incredibly bummed about Harold Ramis dying as well, so I decided to spend some of my limited waking time watching Ghostbusters. Let’s not dwell on this, because I’ll get depressed.

I was feeling a lot better although not perfect by Thursday. I finished the soup for my lunch that day. Late that night, gem came over because it was my birthday and she had a gift for me. She bought a cast iron skillet! I had been wanting one for a while, so that was pretty cool. We also decided to order pizza. It was a terrible idea since I was getting over food poisoning, but it was also my birthday and I love pizza. Luckily my stomach accepted it without complaint.

Friday I celebrated OC Restaurant Week by going to Marrakesh for Moroccan food with Collin, Duncan, and Mimi. The food was delicious, just like I remembered it. I had a tasty salad, lamb, baklava, and tea. I also had a Lebanese beer and some mixed drink called a Belly Dancer. It was tasty, but I can’t remember what was in it. 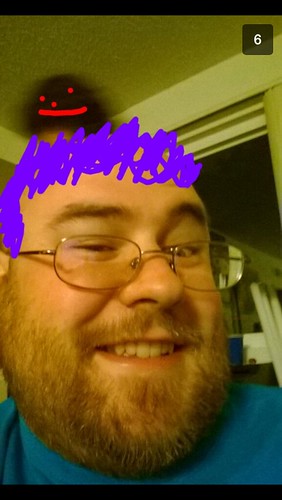 After dinner, we all headed back to our place to hang out, watch Scott Pilgrim vs. the World, and have some wine. There might have been an extraordinary amount of Snapchatting as well. 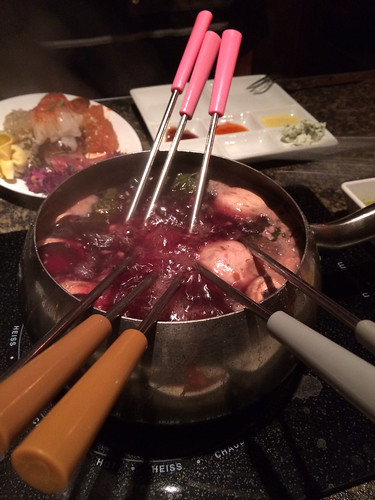 On Saturday I went to The Melting Pot with gem and Edward to celebrate my birthday. I’d been there a couple years earlier for my birthday and really liked it. It didn’t let me down! First there was a tasty salad. Next there was a Wisconsin cheese trio with bread, veggies, and apples. For the main course there was a nice broth with chicken, steak, mushroom ravioli, shrimp, and lobster tail. There might have been a glass of wine and dirty martini in there too! 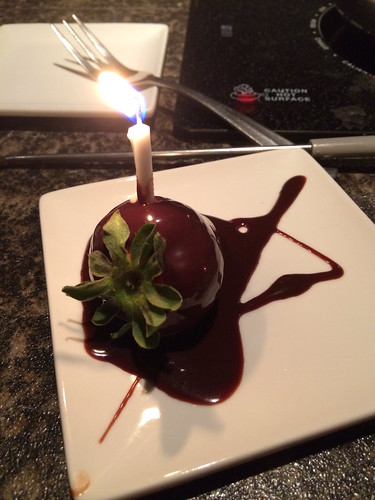 For dessert we had dark chocolate fondue with marshmallow cream and crumbled Oreos. We dipped Rice Krispy treats, brownies, pound cake, bananas, strawberries, cherries, and cheesecake. The cheesecake dipped in the chocolate was so amazing! Because it was my birthday, they also brought me a chocolate covered strawberry with a candle. The waiter told Edward to sing for me because he wasn’t going to do it. He mentioned something about how it’s too bad nobody had a ukulele. Unfortunately, we didn’t have gem’s ukulele with us.

So that was my week! Being sick was pretty miserable, but I had a nice birthday and enjoyed celebrating gem’s as well.