San Diego Comic-Con 2015 was super awesome! It was my first time cosplaying besides wearing my Aquabats costume one day last year, and it was really fun. My favorite part of these conventions has always been looking at the cosplayers and getting photos with them; it’s interesting to participate now. I attended with gem and Antonio as usual. I cosplayed an Aquabat, Professor Monty Corndog from the Aquabats, and Fix-It Felix, Jr. from Wreck-It Ralph while gem cosplayed Sadness from Inside Out, Woody from Toy Story, and Vanellope Von Schweetz from Wreck-It Ralph. Here are some of the cosplay highlights! Thursday I wore my Aquabats costume. It made the most sense because I was going to their concert later that night. 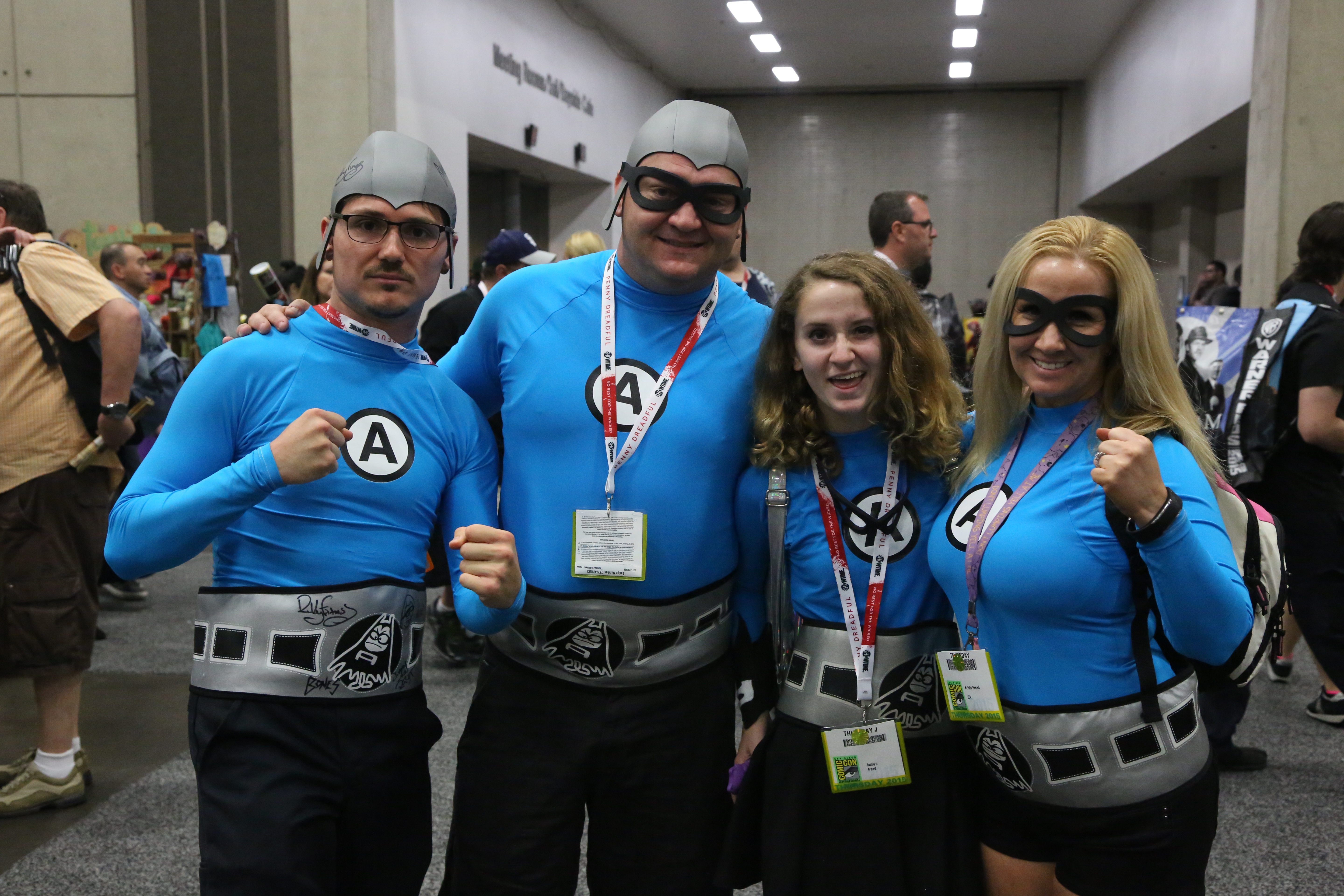 The first photo I was asked to join was this one, shot by Kenneth Yeast. They were posing near me actually! The photographer took a photo of my business card and was nice enough to e-mail me the photos. From left to right, that’s me, @freeddc, @kaitlynfreed, and @lilbelle74 from Instagram. I’ve seen them on Instagram through Aquabats tags and concerts for a while, so it was especially cool to get photos with them. 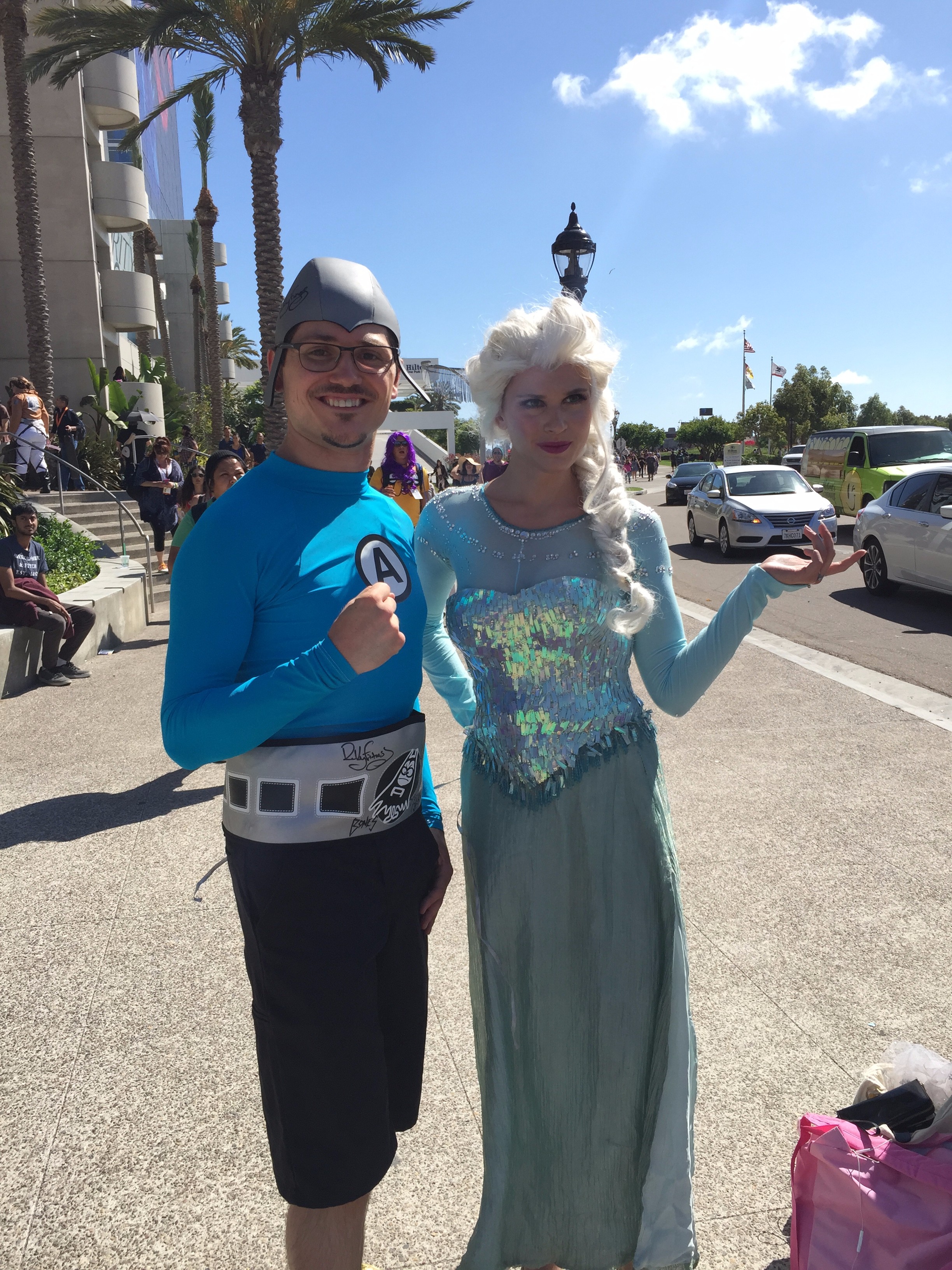 This is @hollandtayloegedney (Instagram) who won an award this year for her Elsa cosplay. She was really nice, and it was fun talking to her. 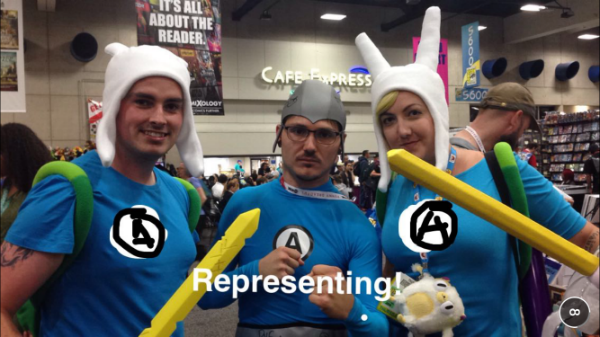 After I posed with Finn and Fionna from Adventure Time, gem worked her Snapchat magic to turn them into Aquabats! 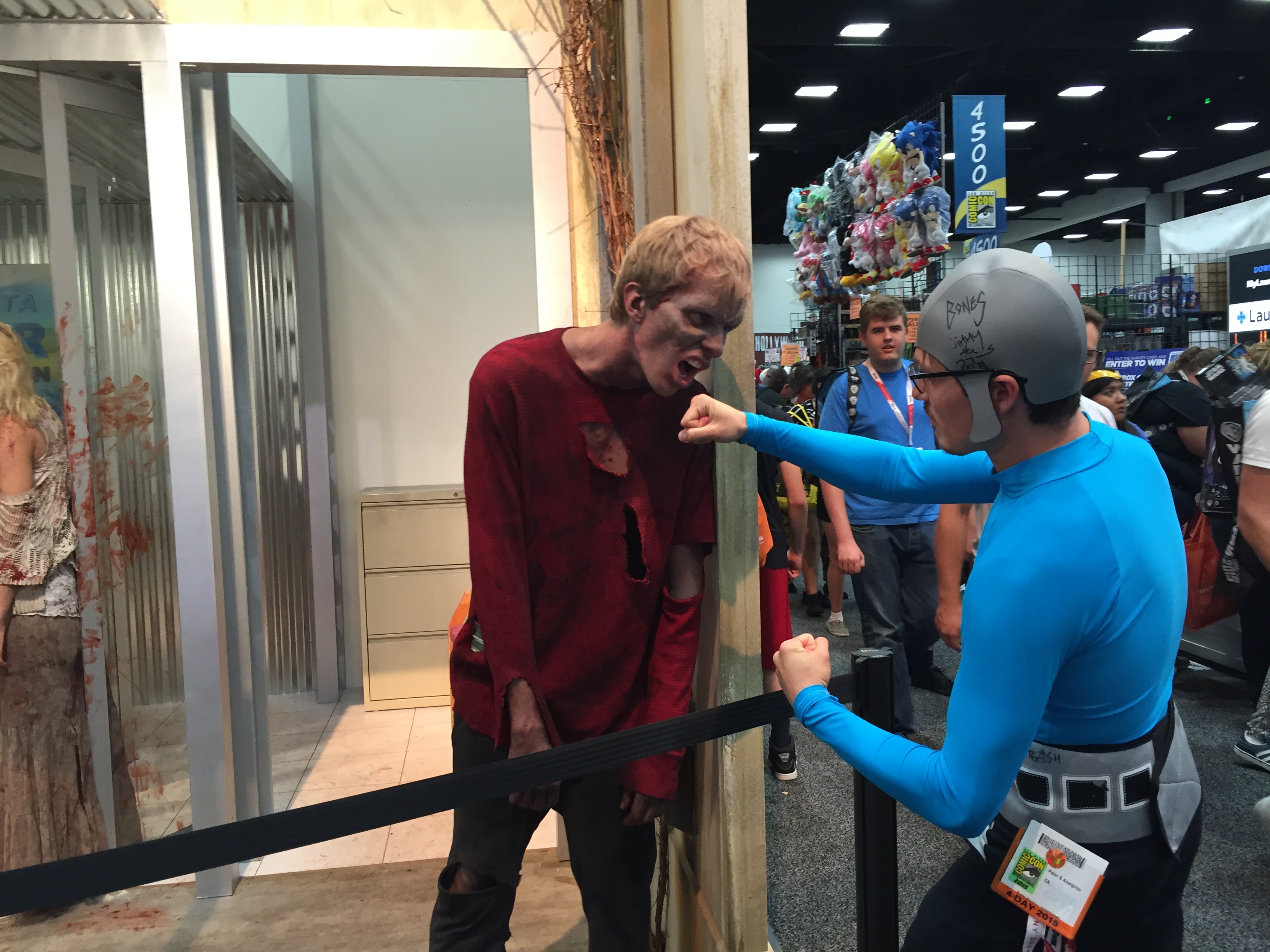 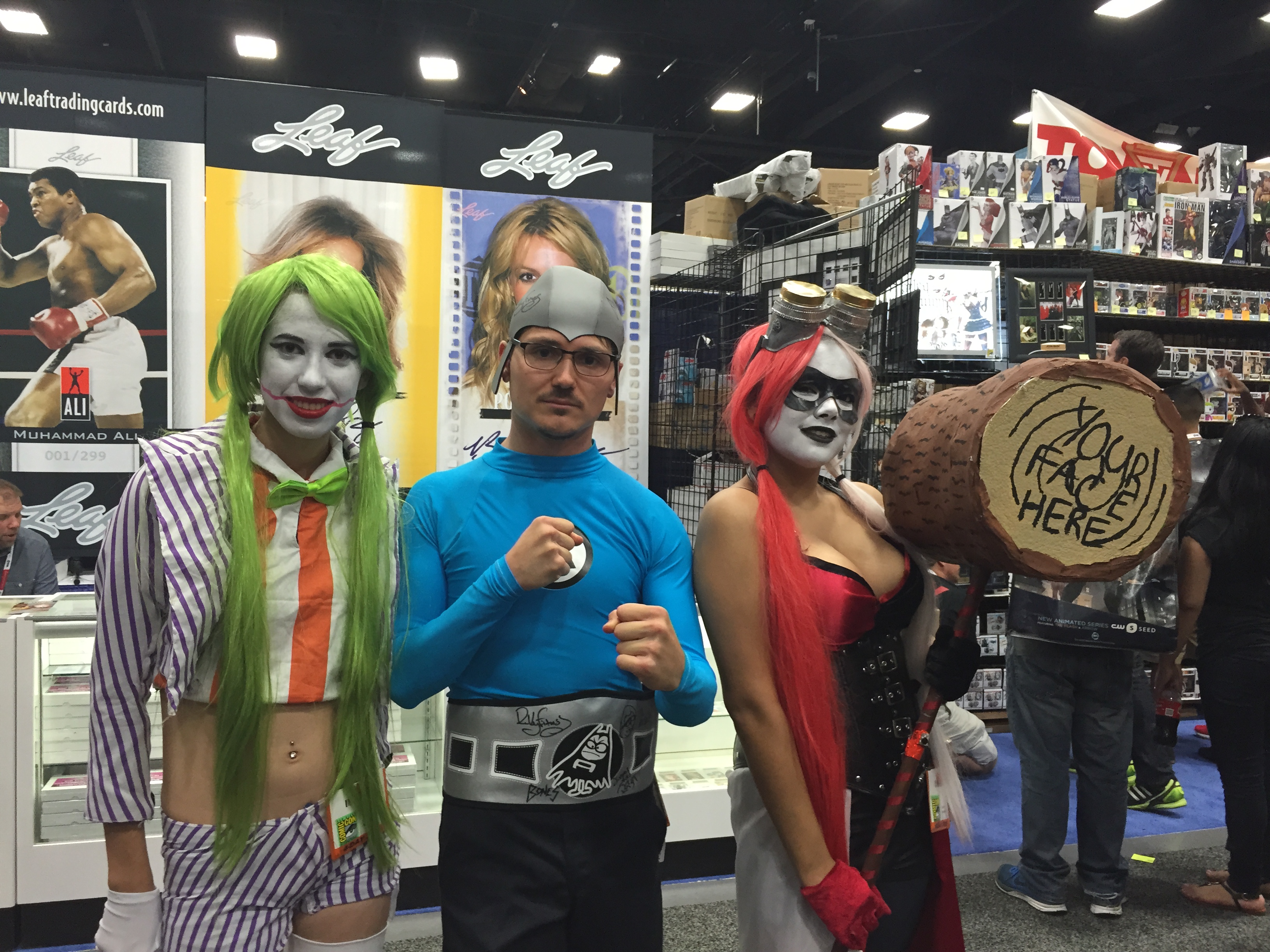 I wouldn’t want to be hit with that hammer! 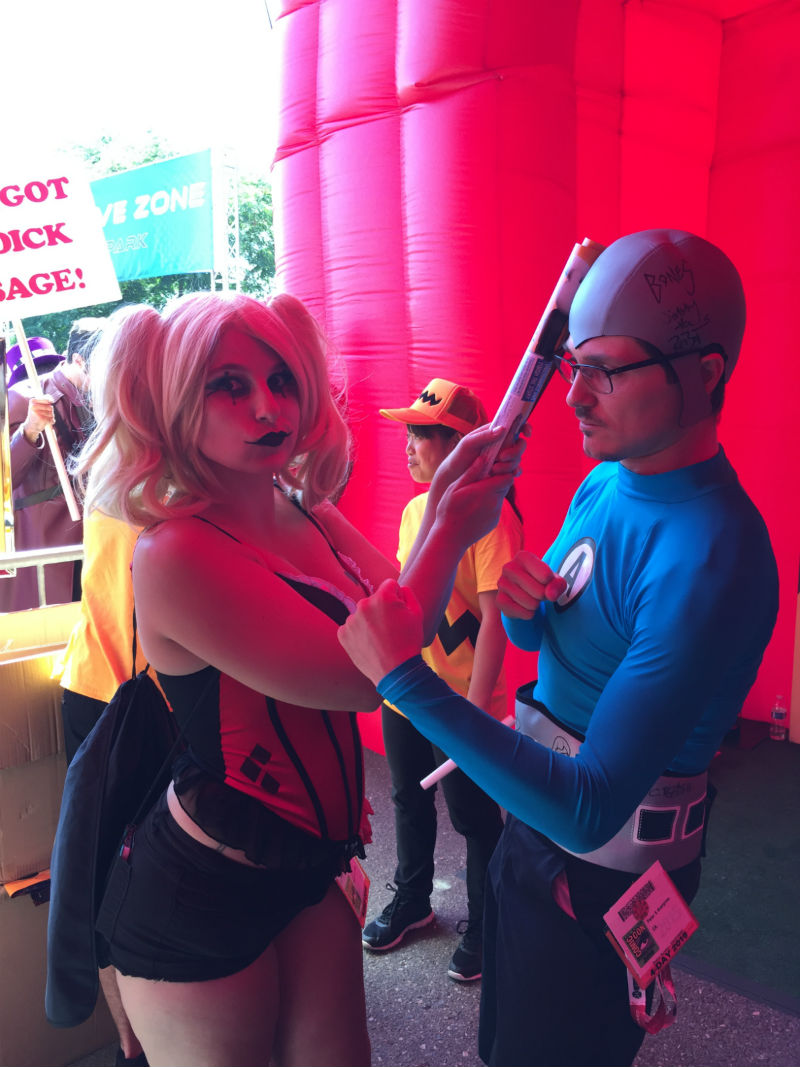 *boink* Ow, my head! Edit: When I first posted this, I didn’t even realize that was Dangerous Pixie! 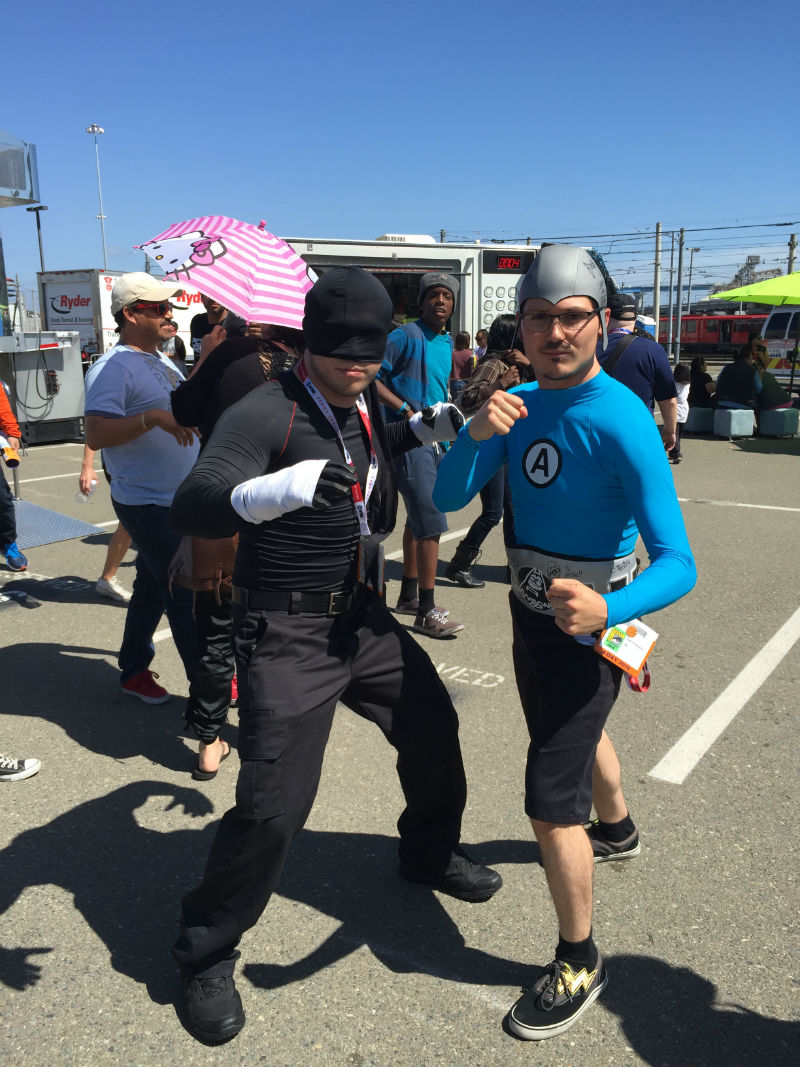 I also met my favorite hero, Daredevil! Edit: This is Tony Rios, @EL_LOBO209 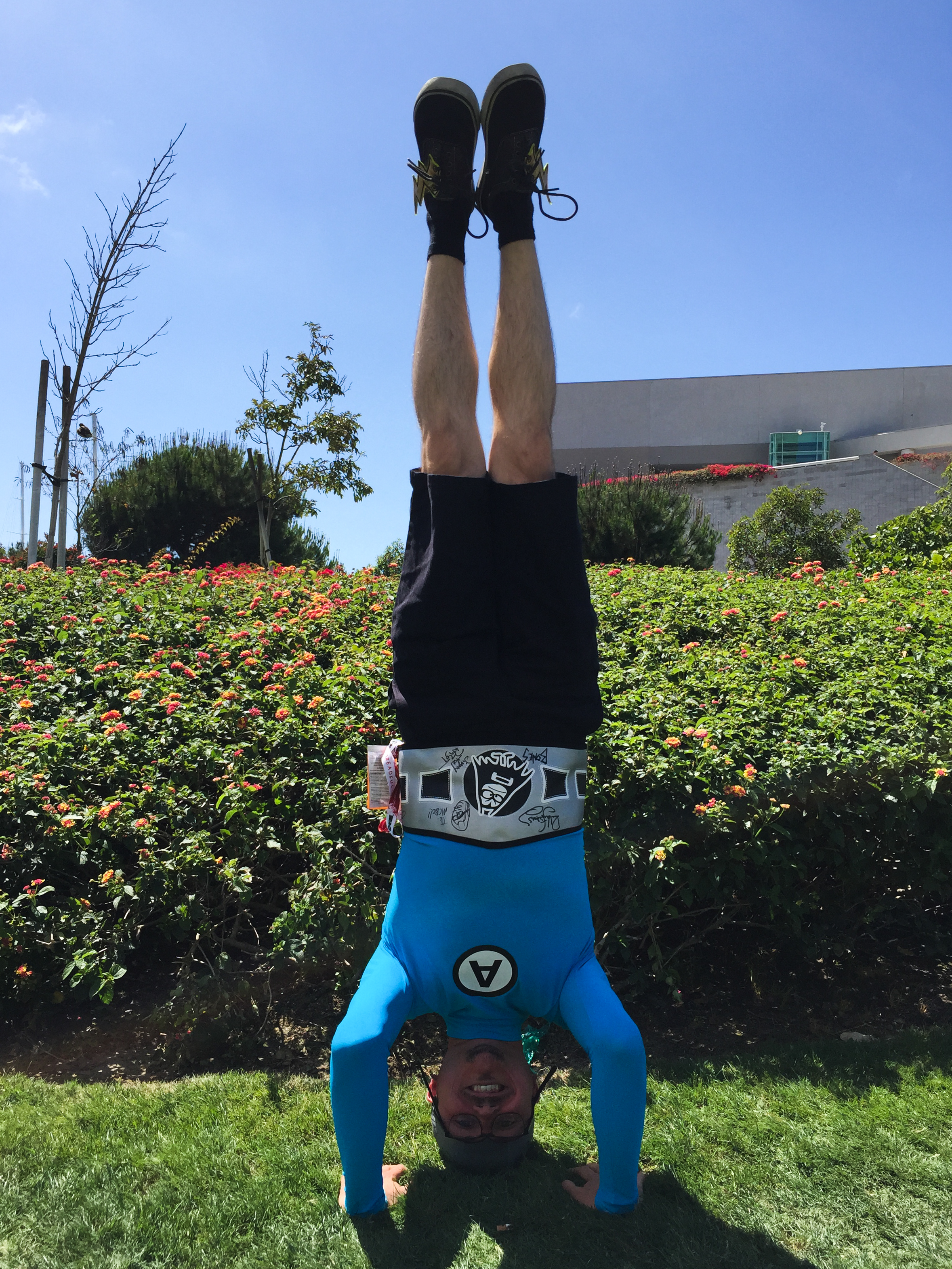 I got in some yoga too. 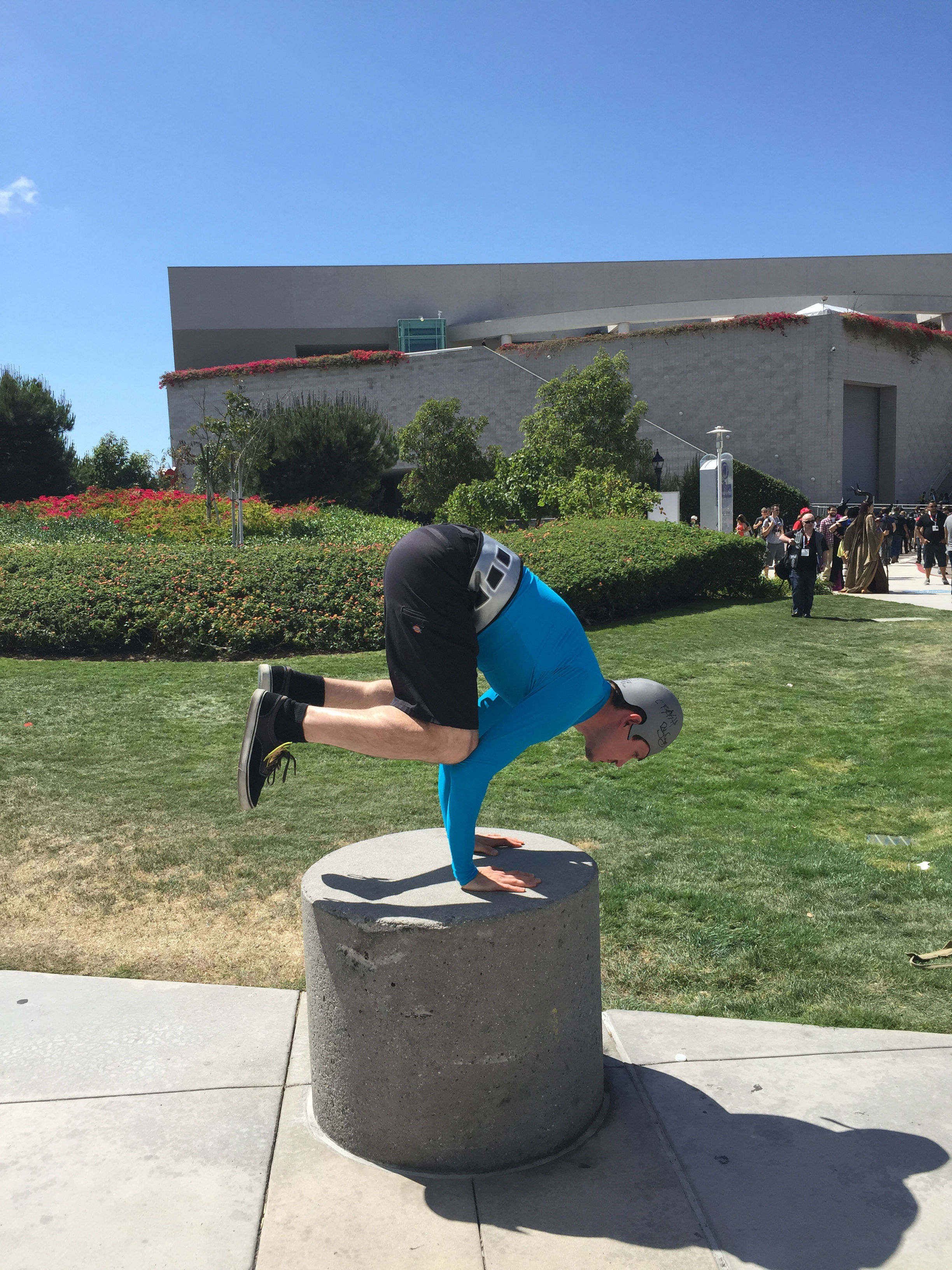 And a little more. On Friday I cosplayed Professor Monty Corndog from the Aquabats. 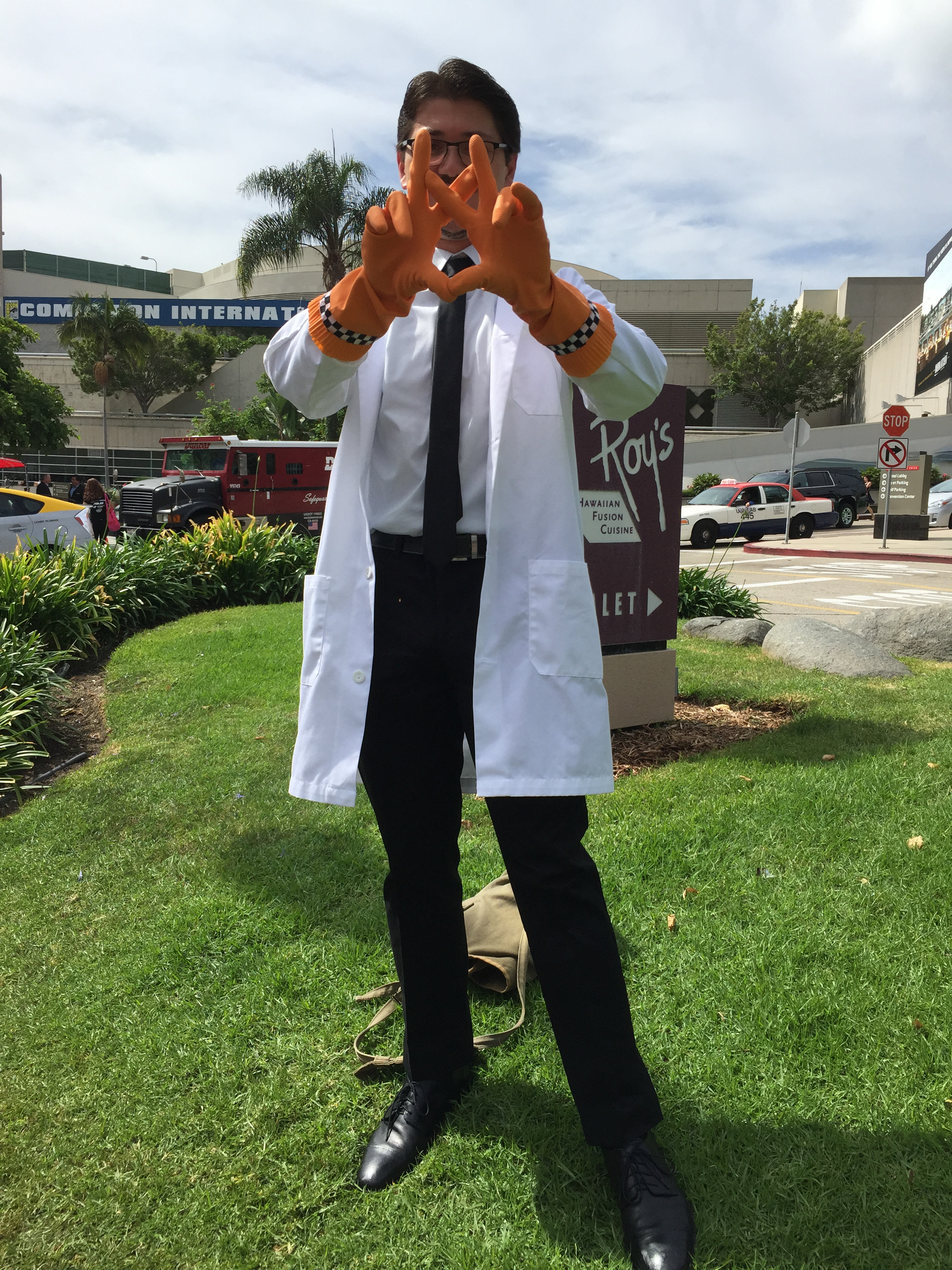 While in line for a panel, some Aquabats lined up behind me. 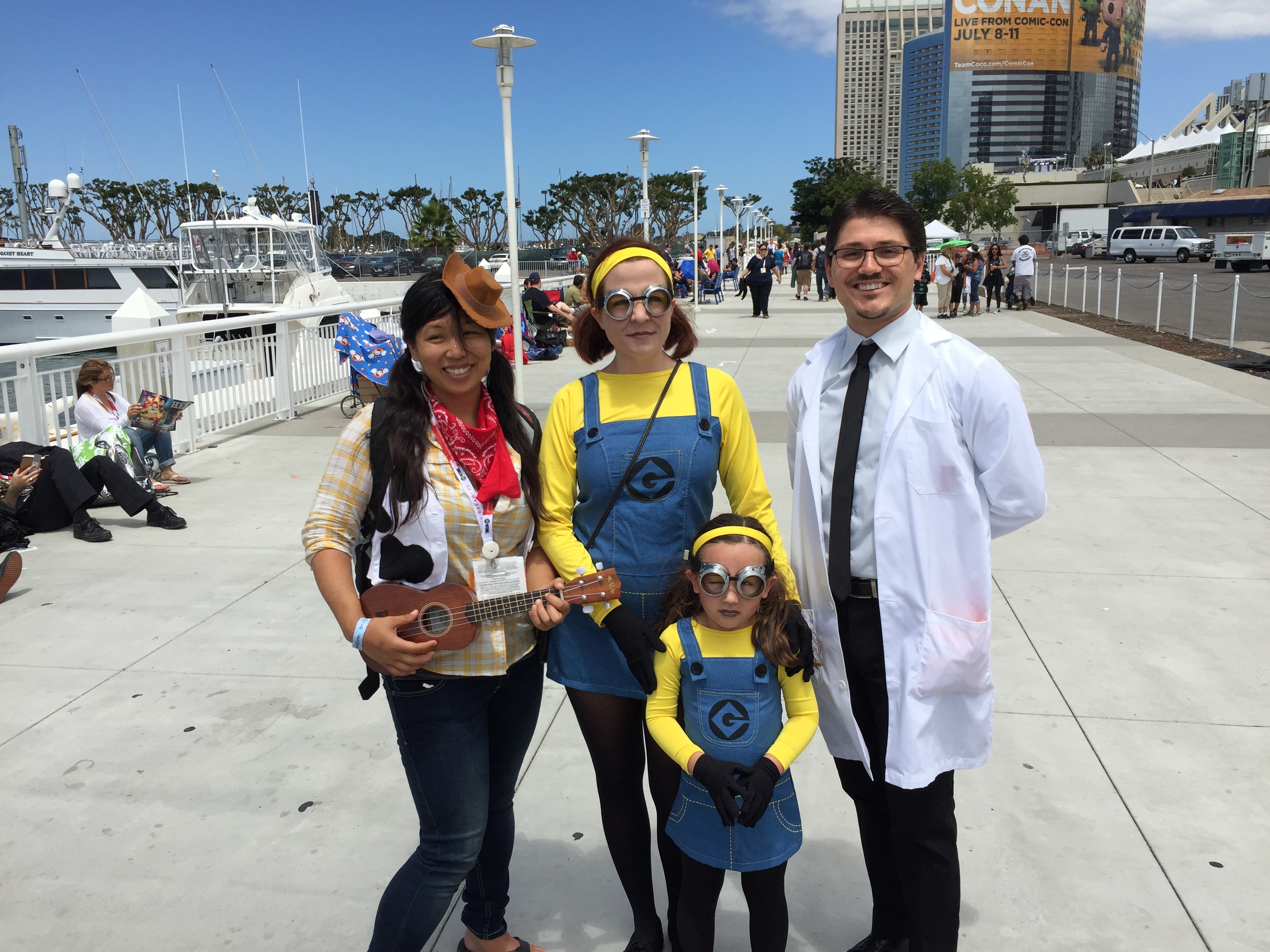 Woody (gem) and I posed with some minions too!

Clay Carmine of Gears of War chainsawed me in the neck! gem performed some Snapchat witchery again. 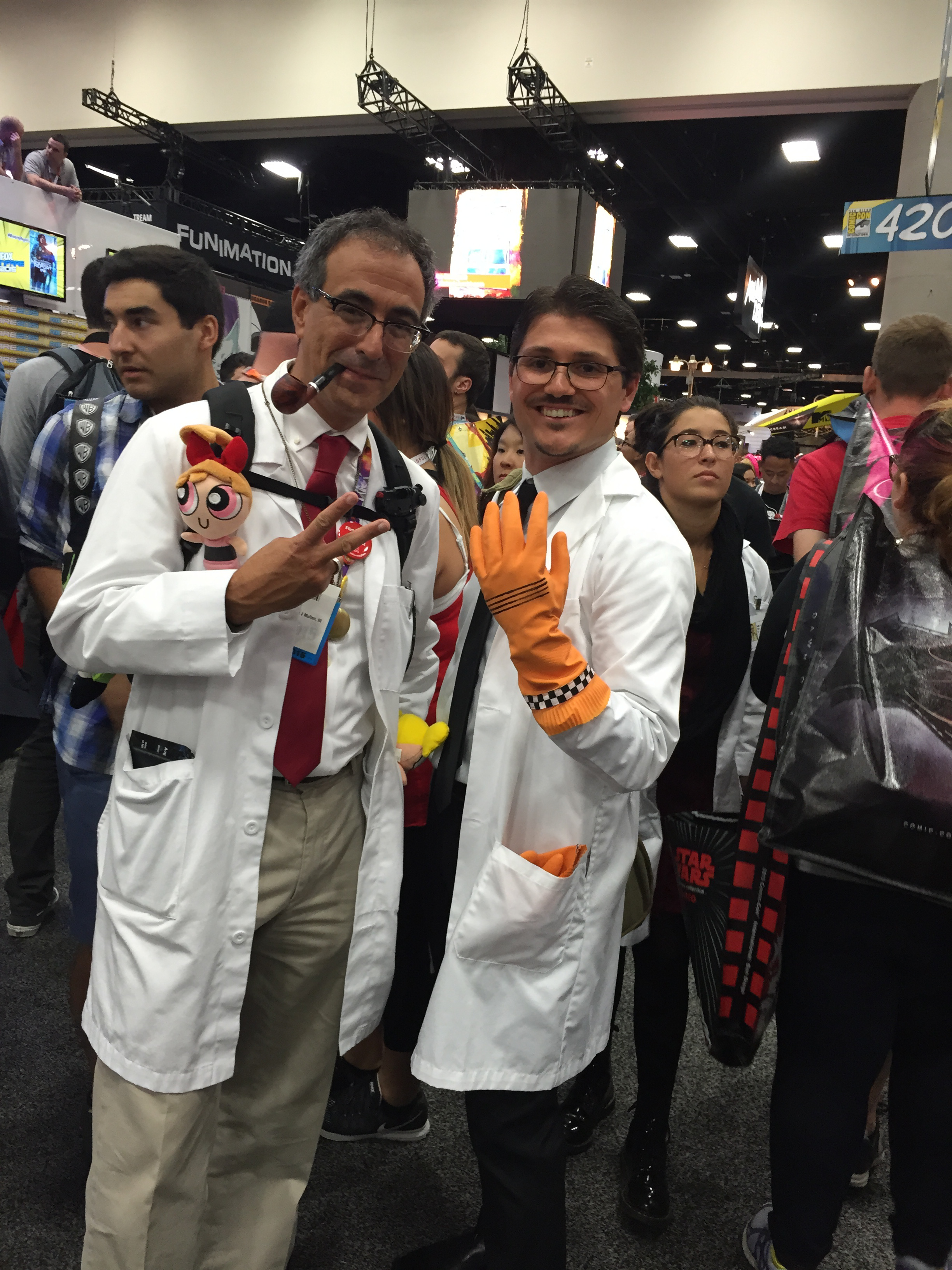 Professor Monty Corndog of the Aquabats meets Professor Utonium of the Powerpuff Girls! 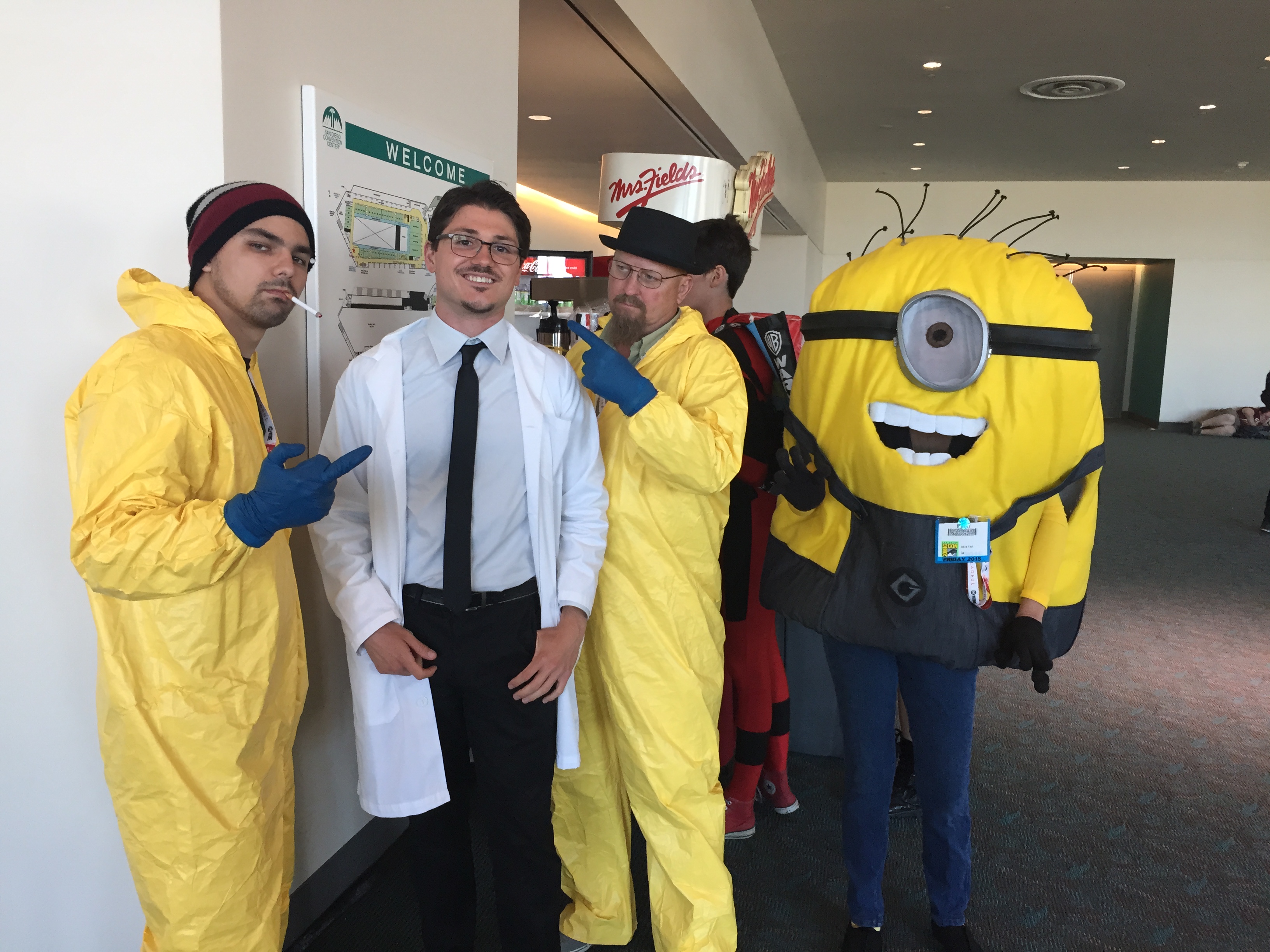 Breaking Despicable? I guess this minion found someone despicable to follow. When I asked for a picture, Jesse said “yeah, bitch.” 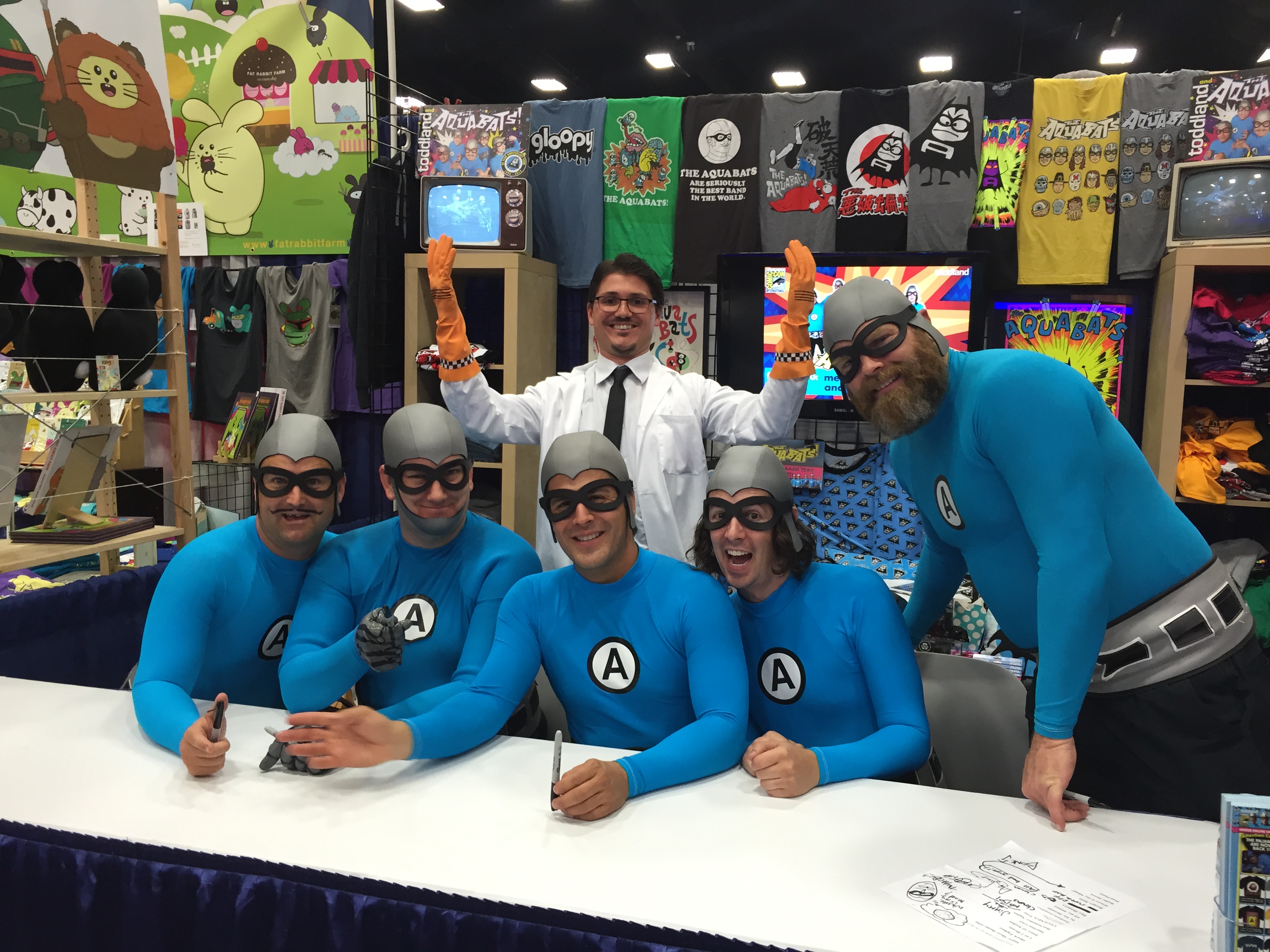 My final cosplay was Fix-It Felix, Jr. from Wreck-It Ralph, which I did on Saturday and Sunday. 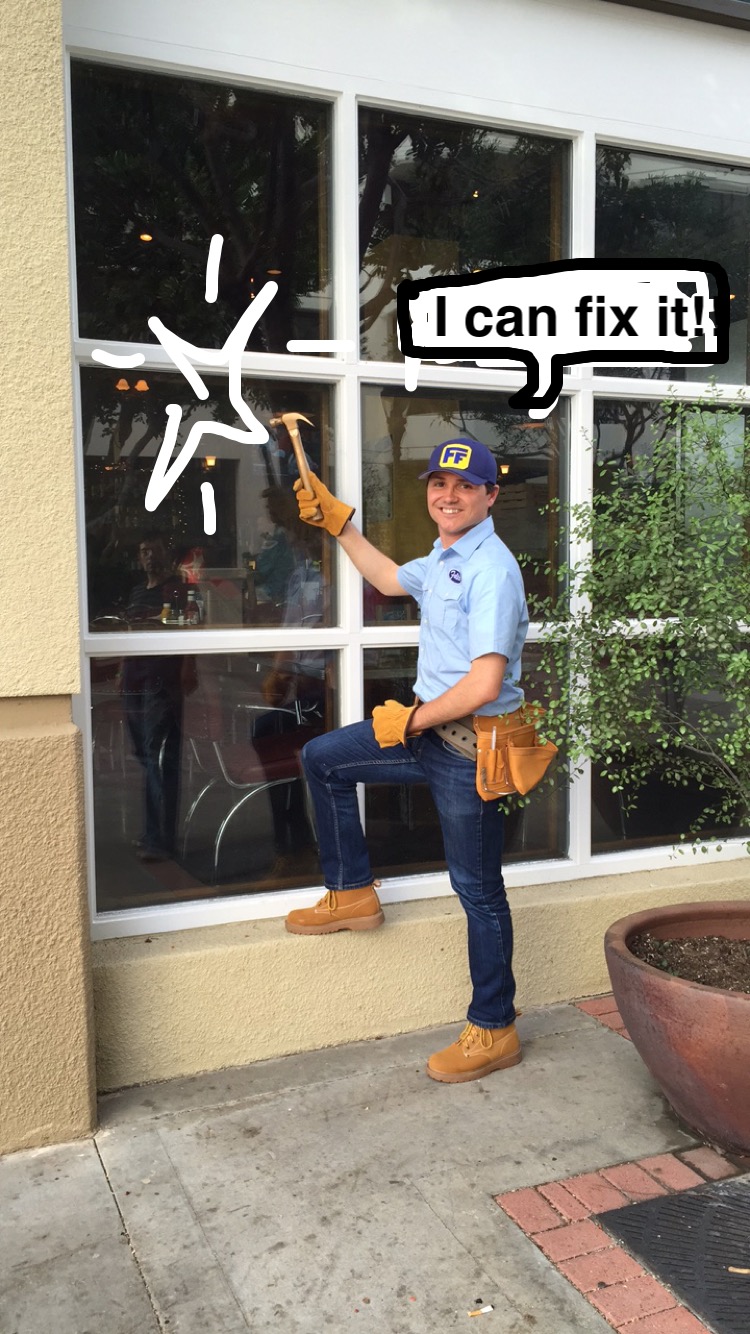 More Snapchat voodoo from gem. I really love this. 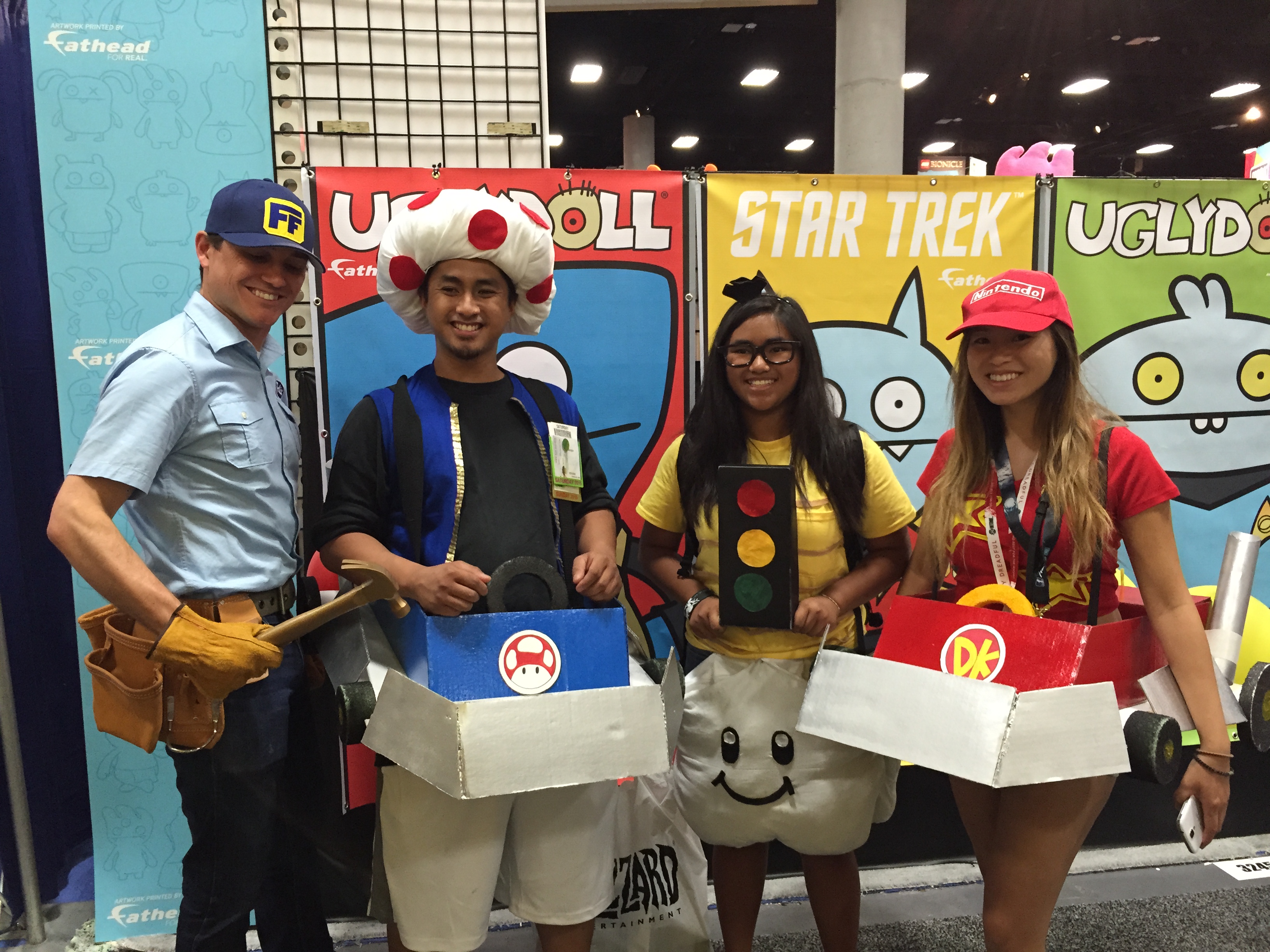 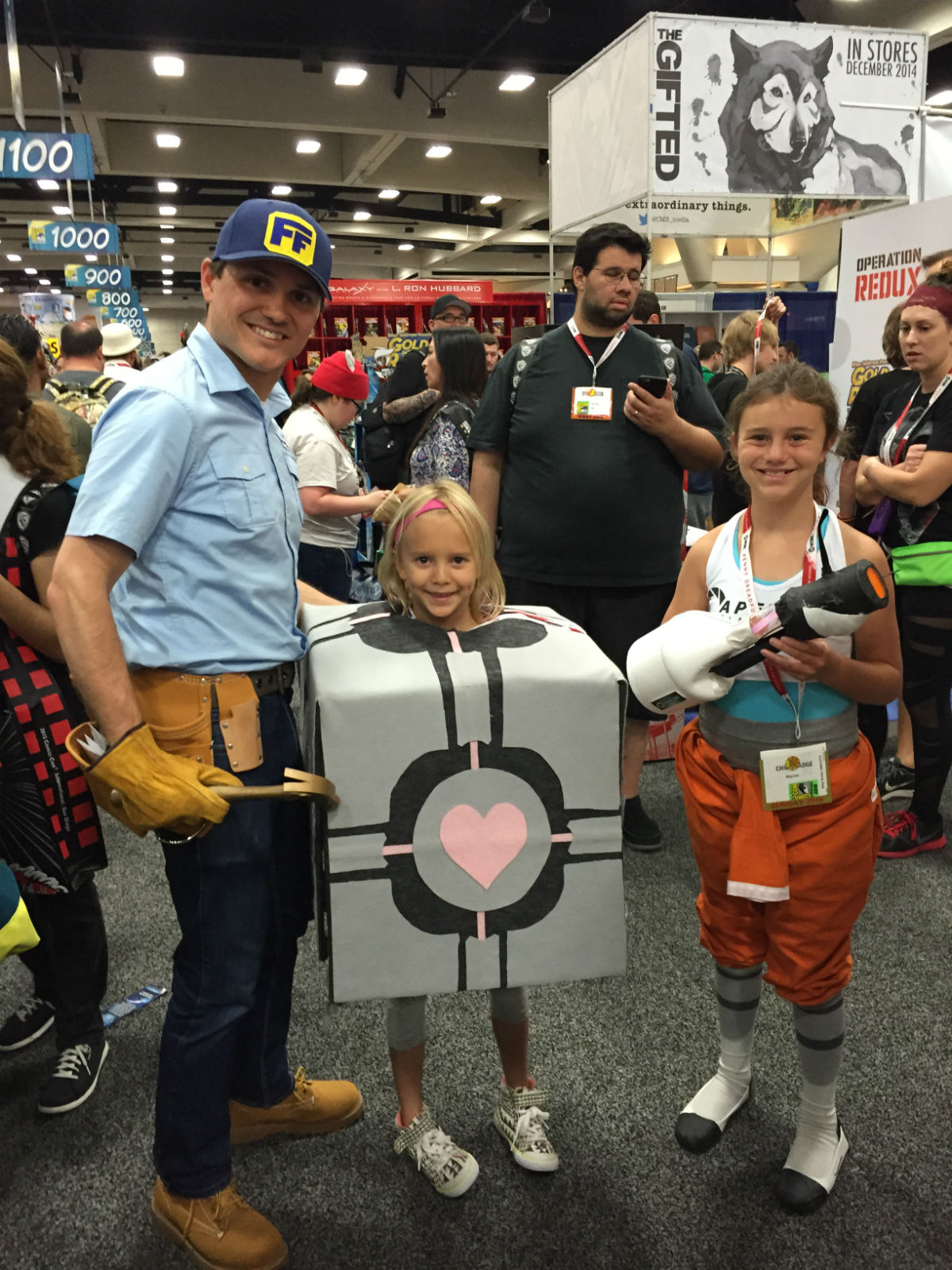 I also fixed this adorable Companion Cube while posing with her and Chell. 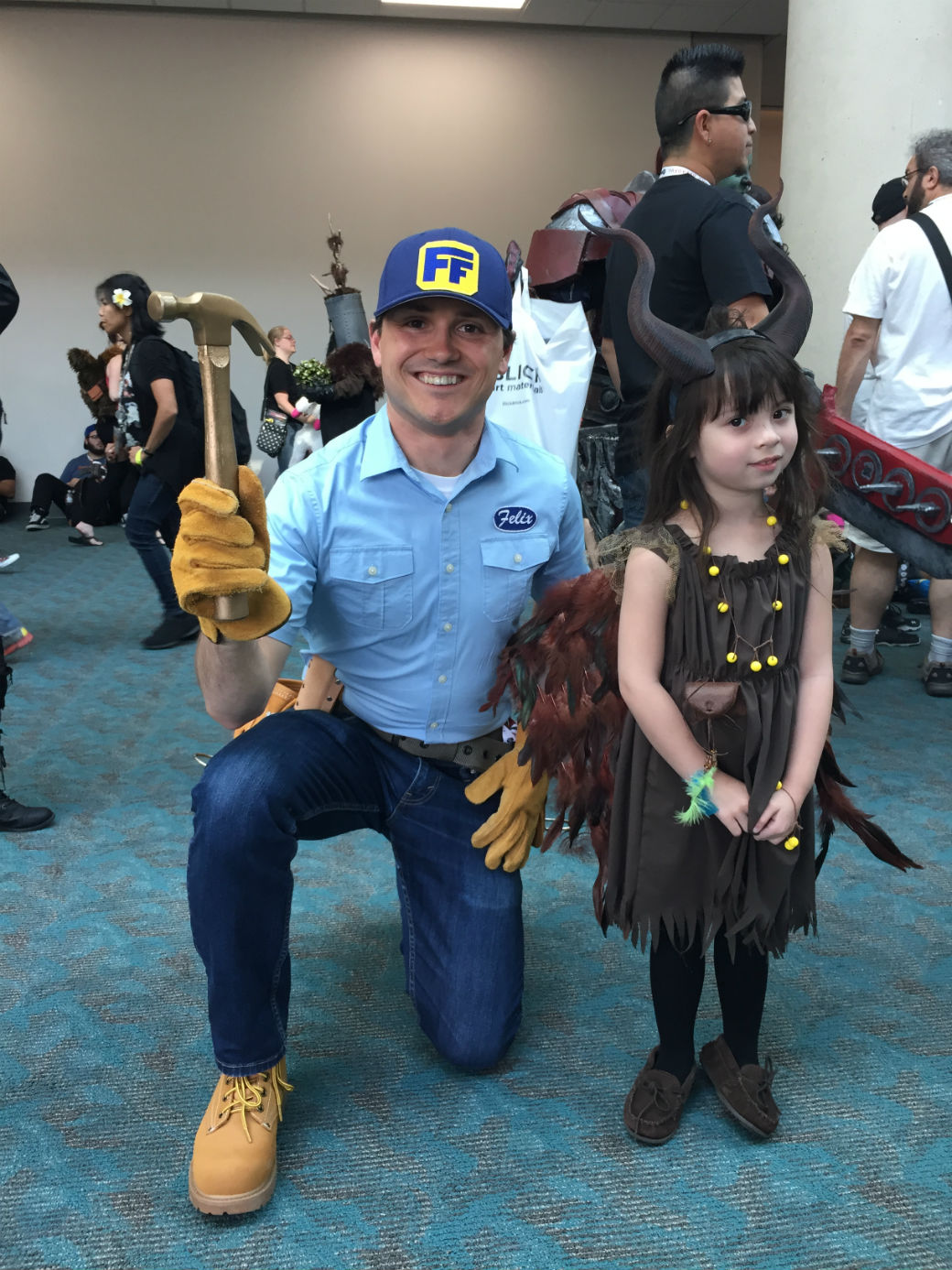 Speaking of adorable, isn’t this Maleficent just the cutest? I think this was my favorite cosplay of the con. My heart kind of wants to explode. 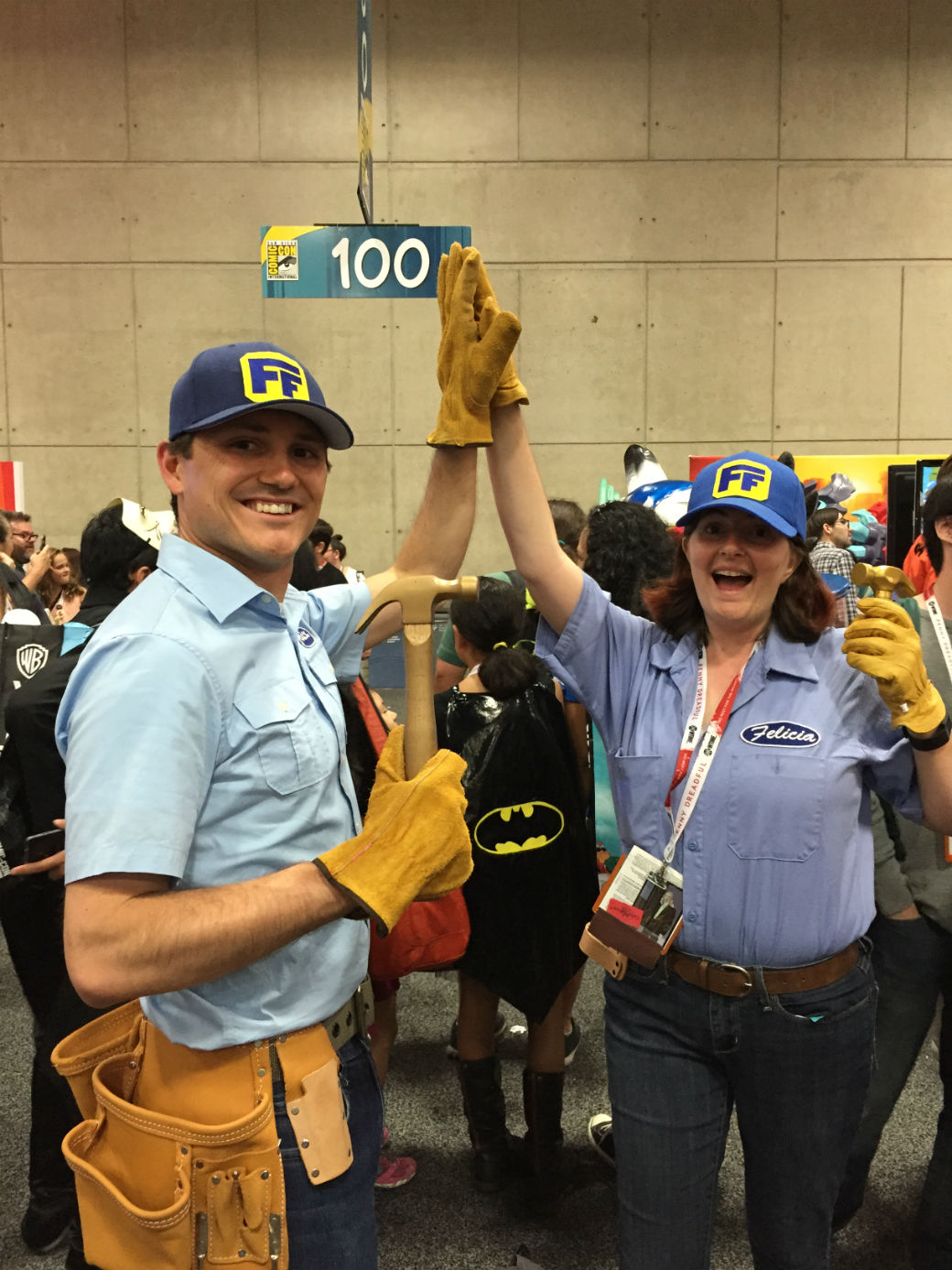 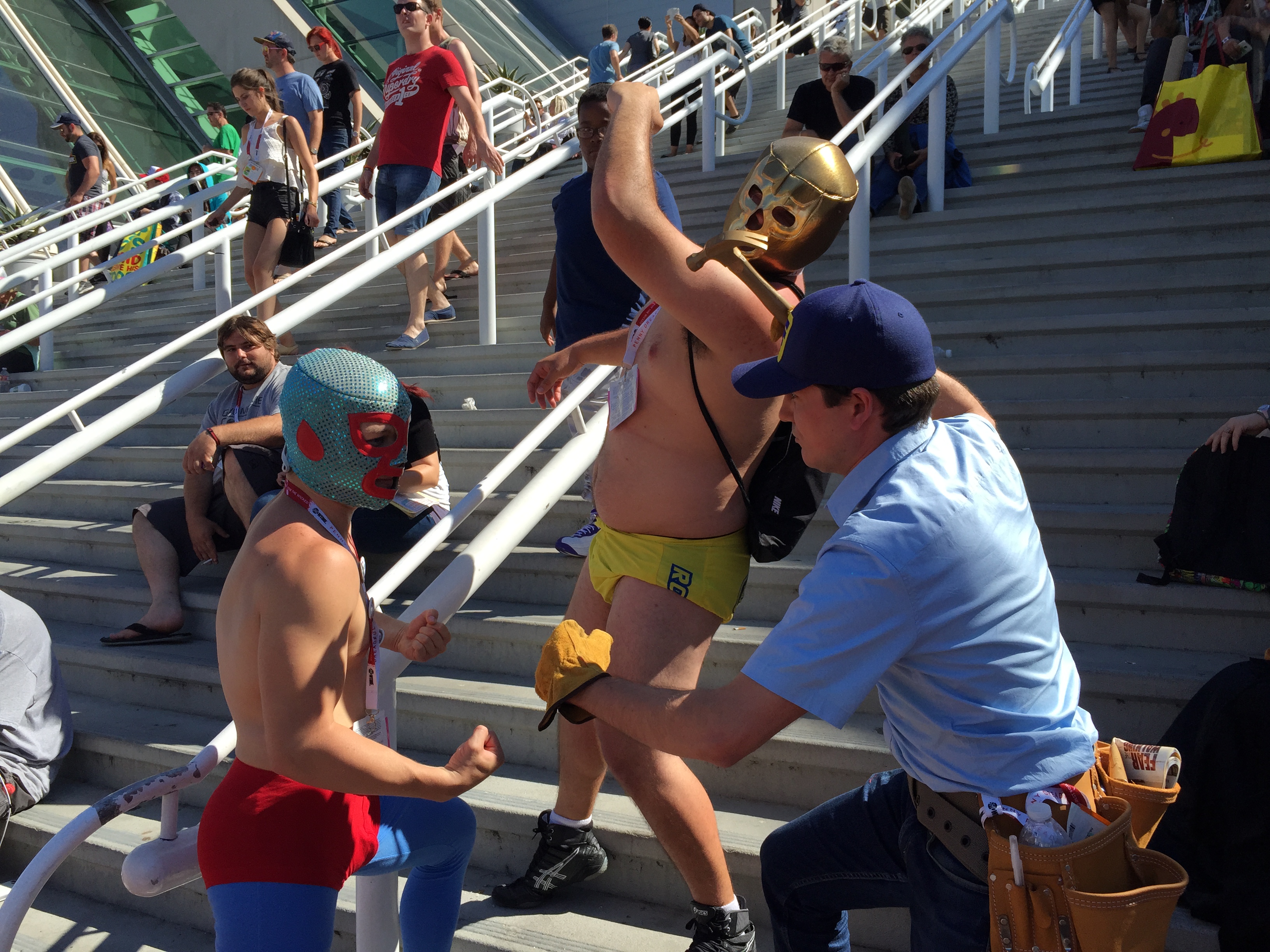 Later I got in a wrestling match. 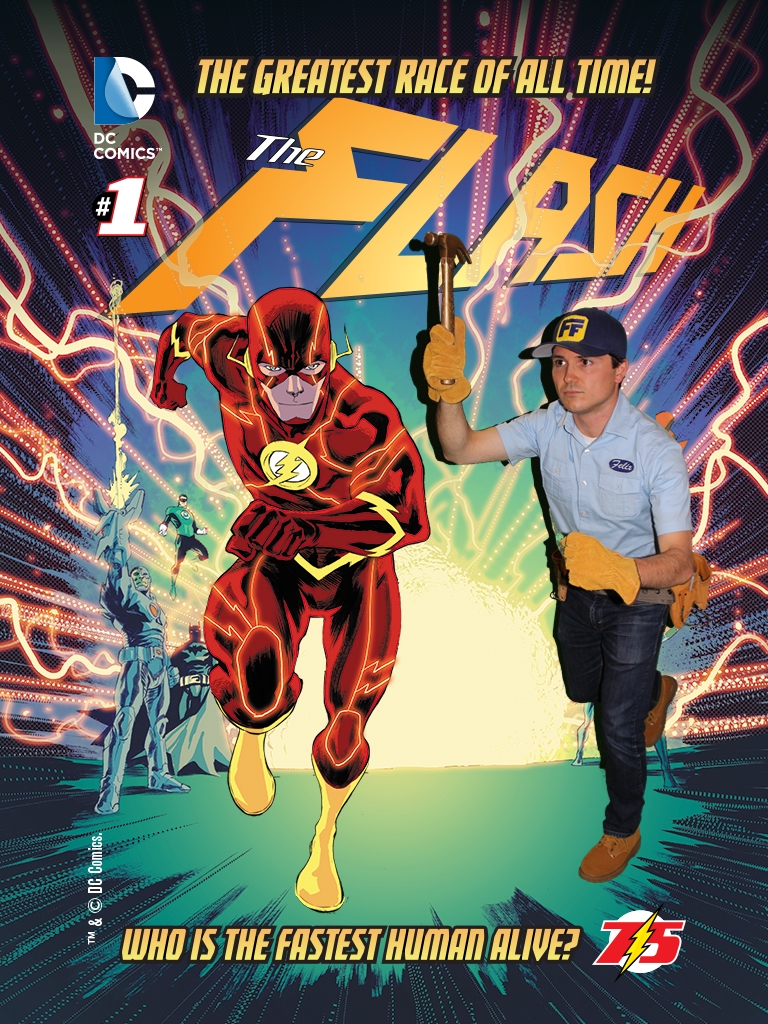 I even tried to fix the Flash right in the head!

I wasn’t in costume for these, but I saw some cool cosplays while I eating dinner too. 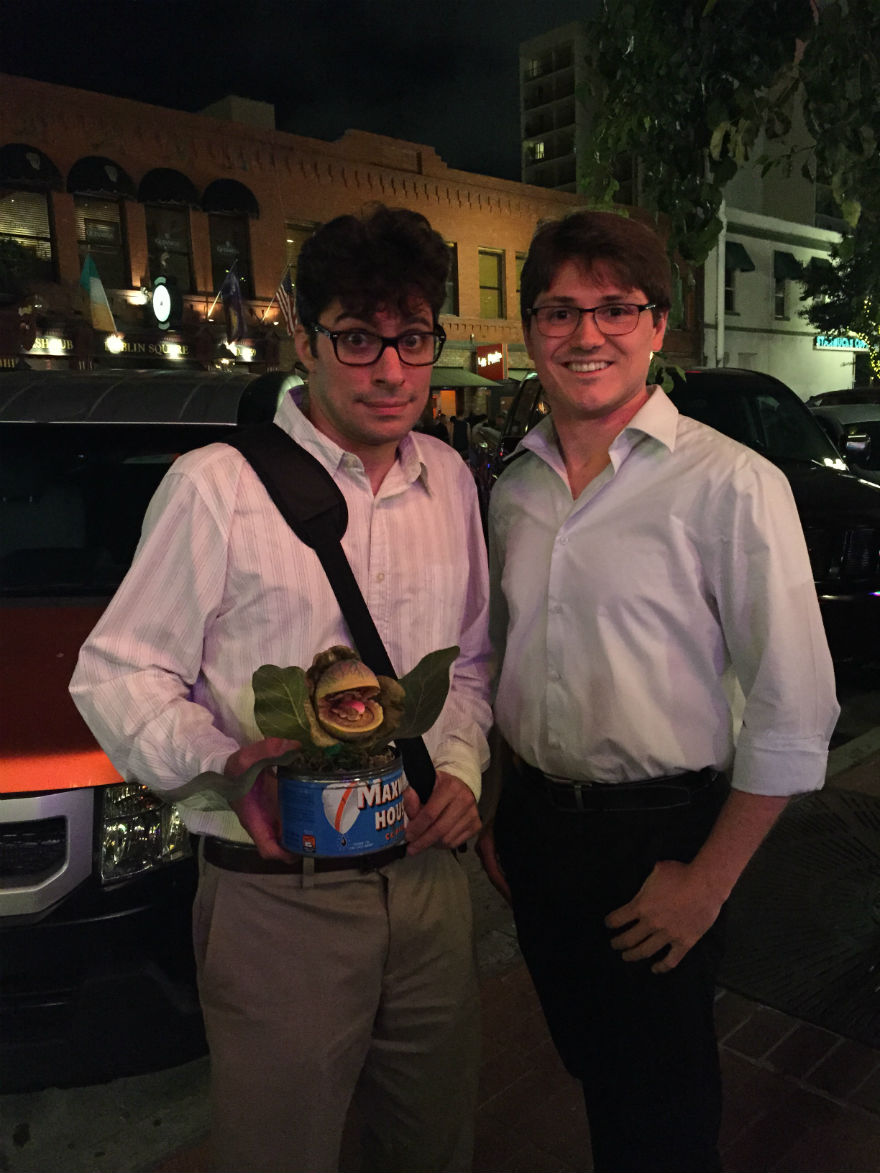 Feed me, Seymour! Feed me all night long! Check out that Audrey II! 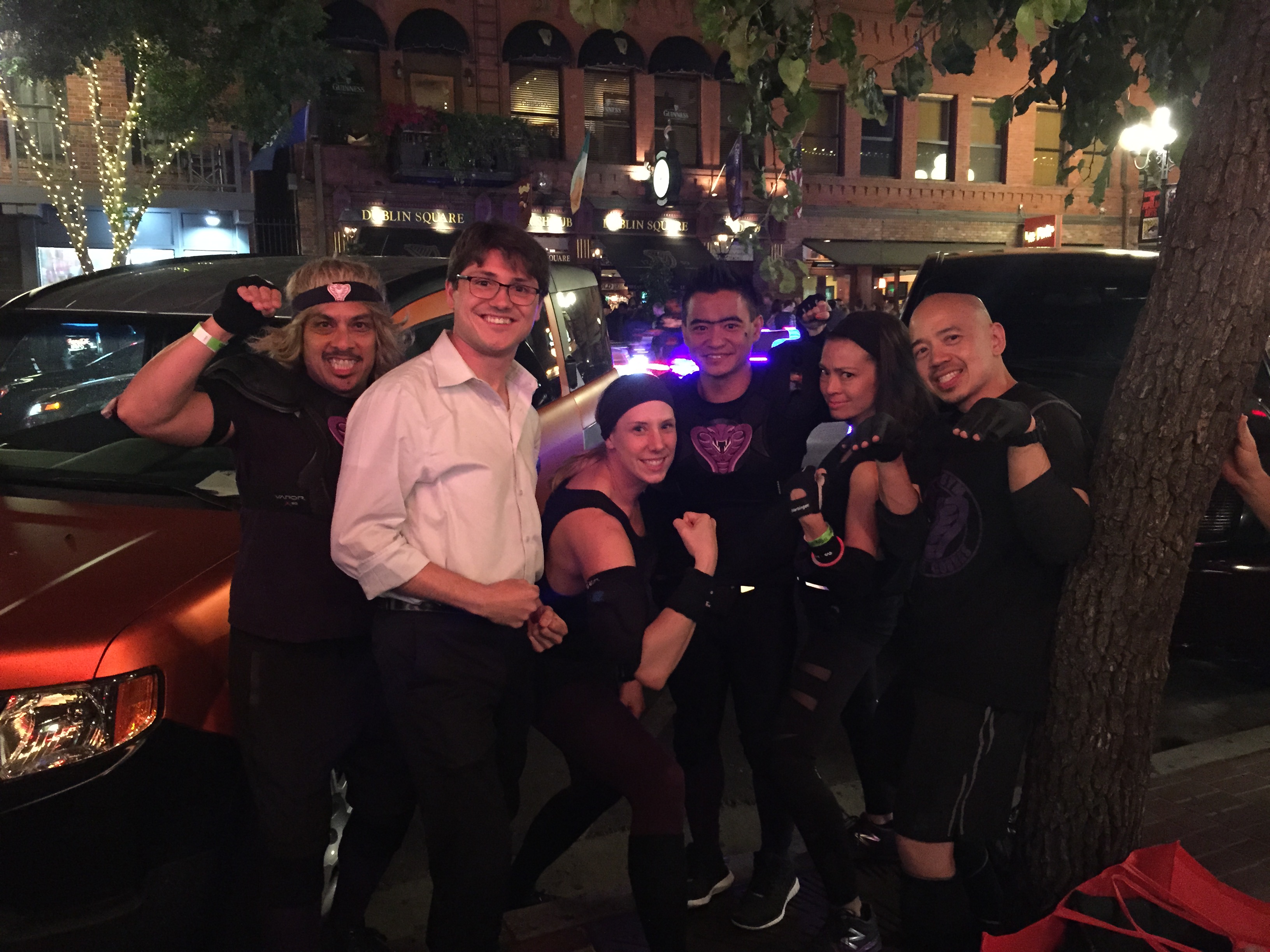 I couldn’t resist a photo with the Globo-Gym Purple Cobras! 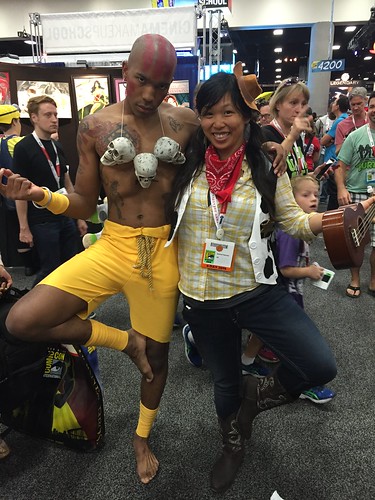 gem even did yoga with Dhalsim!

The Aquabats concert was amazing. Here they performed a cover of The Pixies’ Where Is My Mind. They also showed a video they’re going to pitch to TV execs to try to get The Aquabats! Super Show! picked up. It showed the MCBC begging a cloaked wizard to help. He reveals himself to be Jack Black, absorbs the Commander’s powers, and transforms into an Aquabat. He agrees to help and talks about how we’re all Aquabats before using his magic to transform a bunch of celebrities into Aquabats, including Weird Al Yankovic, Tony Hawk, and more. It was very cool. 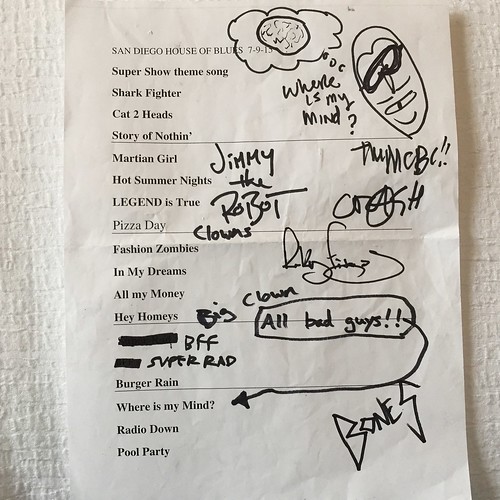 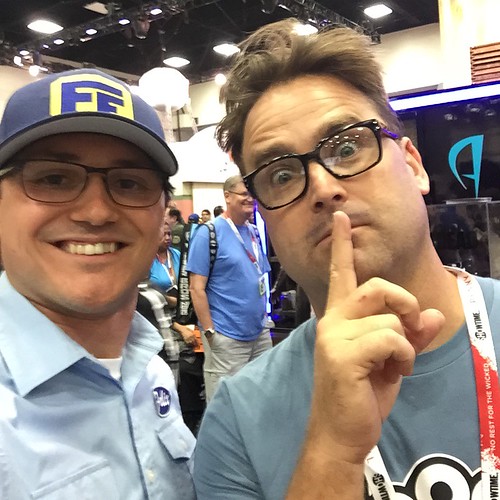 I also met this guy who isn’t wearing a costume because he’s a regular guy. It couldn’t be the Bat Commander. The Bat Commander doesn’t wear normal shirts like that. He was really nice, and he talked with me about getting more involved with the Aquabats. It probably helped that gem gave him a bunch of snacks! And speaking of gem giving snacks, she gave care packages to other people, such as Todd from Toddland. He was super cool. Technically gem got his number! 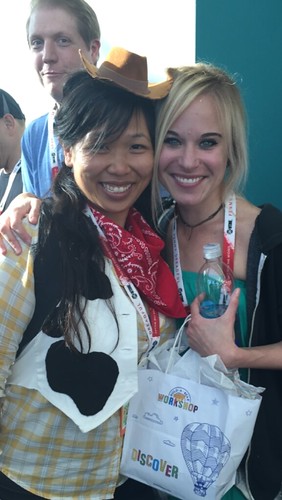 We saw Allie Brosh of Hyperbole and a Half. Her panel was moderated by Felicia Day, and it was super great. gem gave Allie some cookies and snacks, and Allie was very appreciative and nice. They hugged and took a photo together. We also saw a panel about Jhonen Vasquez, creator of Invader Zim. He was very down to Earth and discussed how scary it is that some people identify with parts of his crazy comics. 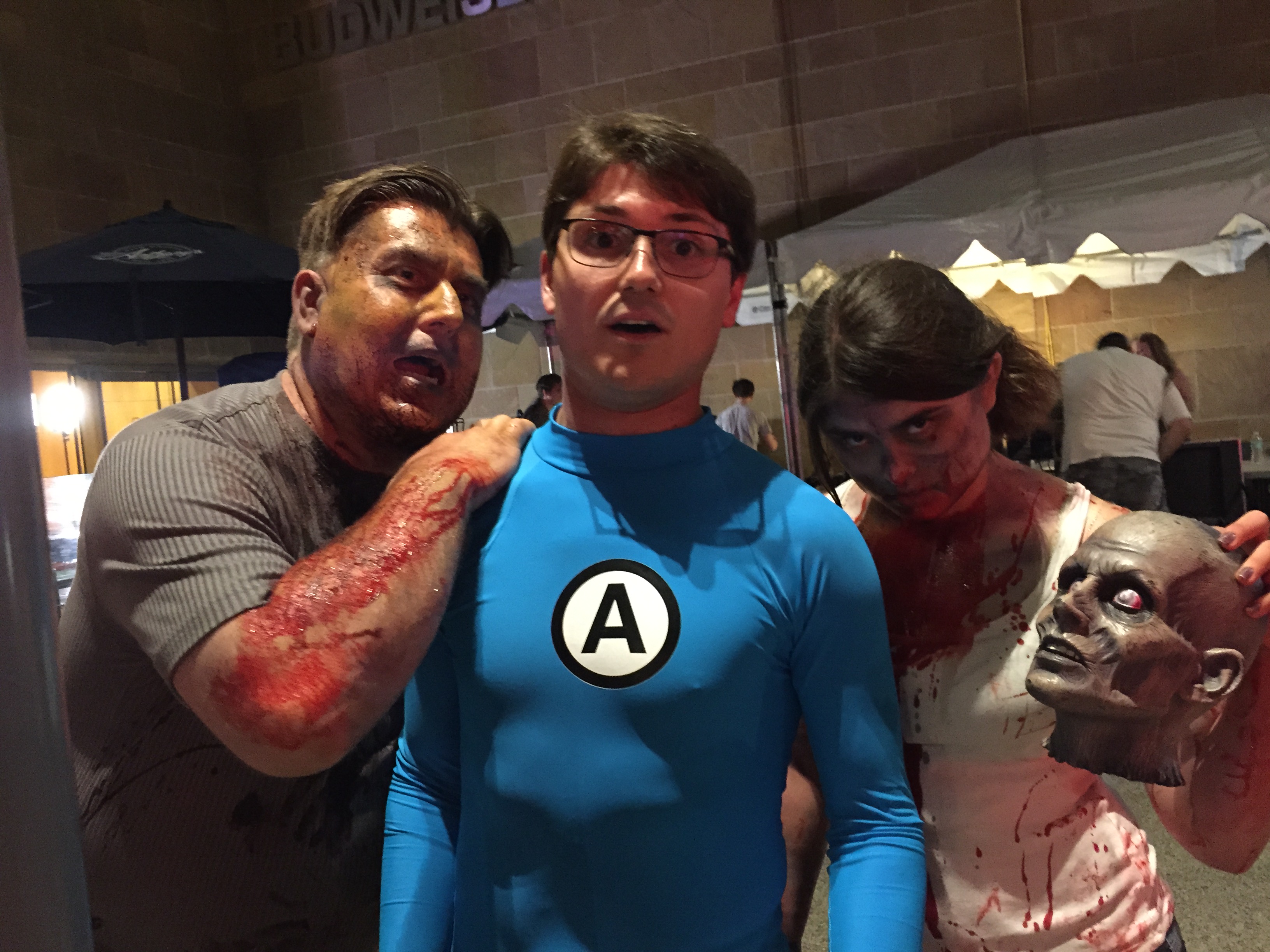 We ran the Walking Dead Experience, and I did it in my Aquabats costume. It was really fun.

We arrived in Petco Park as survivors, and someone escorted us inside, claiming it’s safe. Of course, walkers showed up, and we had to run. They’re all played by volunteers who couldn’t really hurt us, but I got into it and definitely ran hard and dodged walkers. Eventually we met a second group of survivors who weren’t as friendly. They killed our leader when they found out we didn’t have supplies. Our talks were cut short when walkers approached, and we all had to run again. At the end, they decided to cull the weak. They chose someone from our group to kill, and it ended up being Antonio. They had him kneel as they raised a club to kill him. Luckily for him, walkers arrived once more, and we ran for it. Antonio said that as the walkers arrived, someone (presumably staff) lifted him to ensure he didn’t get trampled. It was so much fun! 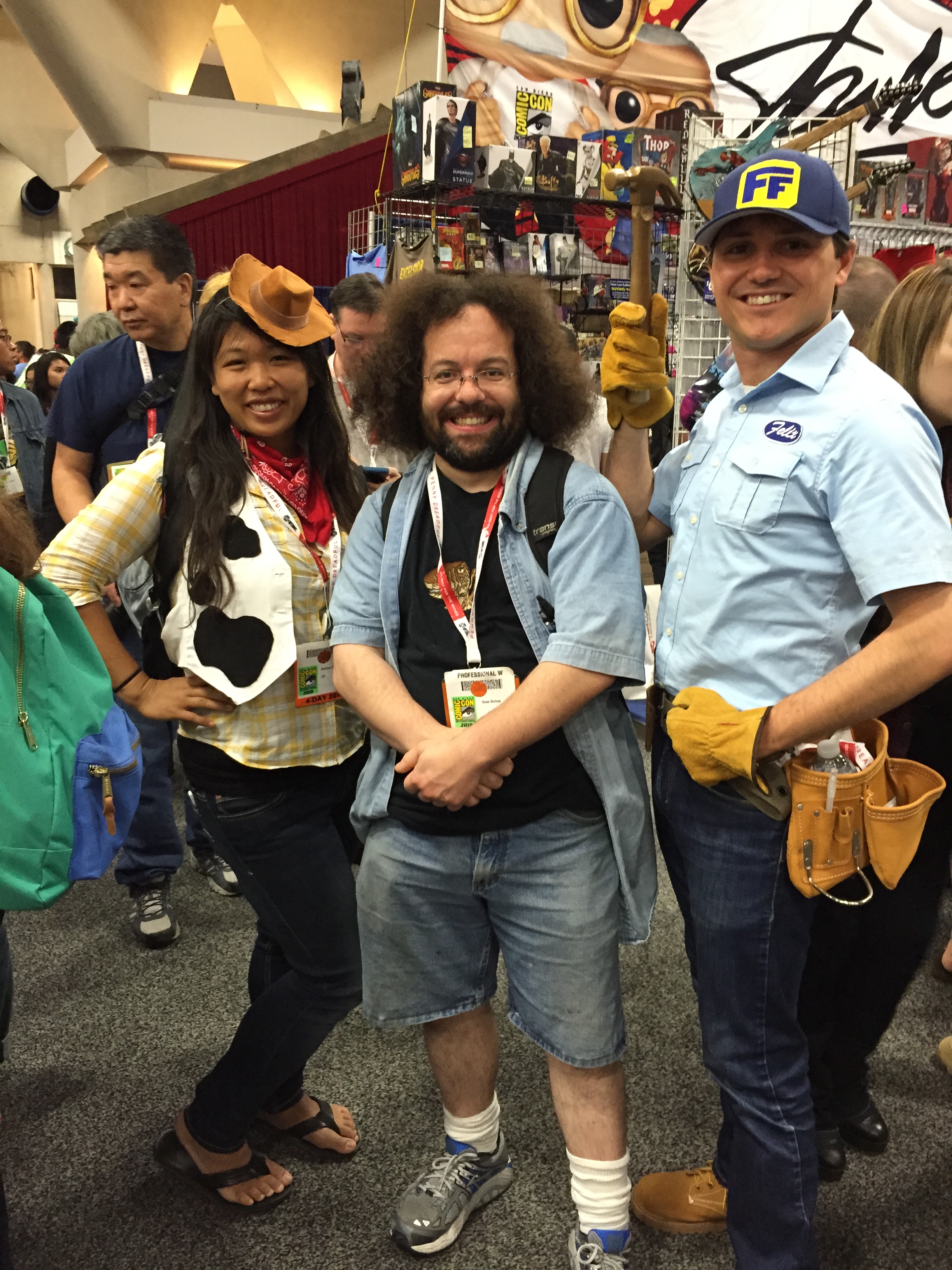 Let’s see… what else. We ran into Bryan Lackey, a fantastic trumpet player. I know him from Skapeche Mode and Failed to Victory. He was really friendly and stopped to chat with us for a while before taking a photo and friending us on Facebook! 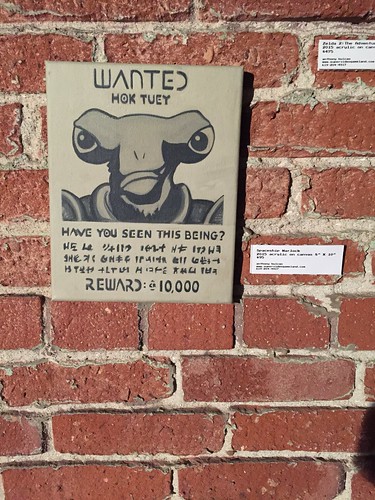 We also went to an art exhibit called Super Video Game Land by Anthony Bulcao at the Mission Brewery. He paints scenes from video games and is really talented! He had two painting from Spaceship Warlock, an old adventure game I loved as a kid. I was most excited for those two. He said he wasn’t confident about including them, and that I was the only person who talked to him about them. I’m glad I did!

I also participated (badly) in a kazoo and ukulele play-along, met Rikki Simons, voice of Gir (and more) from Invader Zim, played games at the Nintendo Lounge, and sang along with gem while she played Martian Girl in a line. Such an awesome weekend!

I know they’re not going to read this, but thanks to all the people who asked for photos and appreciated my cosplay – the Aquabats group photo, the jedi, the dude with the swords, and the three or four other people who liked my Aquabats costume, and the Nintendo employee, Quailman, the little Captain America, Ariel (who was excited and wanted a photo after I asked her first), and the other 14 or so people, especially the little kids, who liked my Fix-It Felix, Jr. It made me very happy!