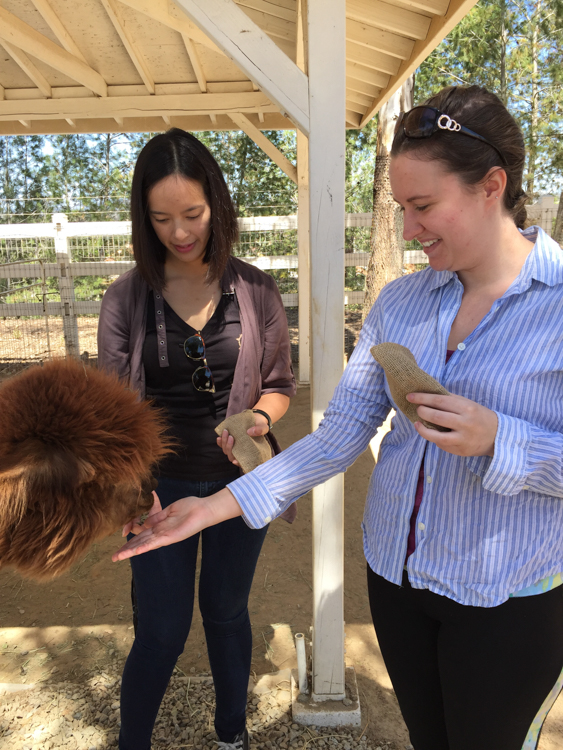 For Anela’s birthday, I arranged a tour of the Alpaca Hacienda in Temecula. She loves alpacas, so I thought it’d be great. When I was first feeling her out about it, the conversation went something like this.

“Have you ever been to an alpaca farm?”

“Nope, ugh, that’d be terrible!” At this point, I felt confused. She wouldn’t enjoy it? Would I need to find a different gift? At the moment, I thought maybe I’d give her a travel to a quiet and relaxing villa from the exclusive YourKohSamuiVillas on Thailand? But then she continued. “I’d never want to leave!” Perfect. 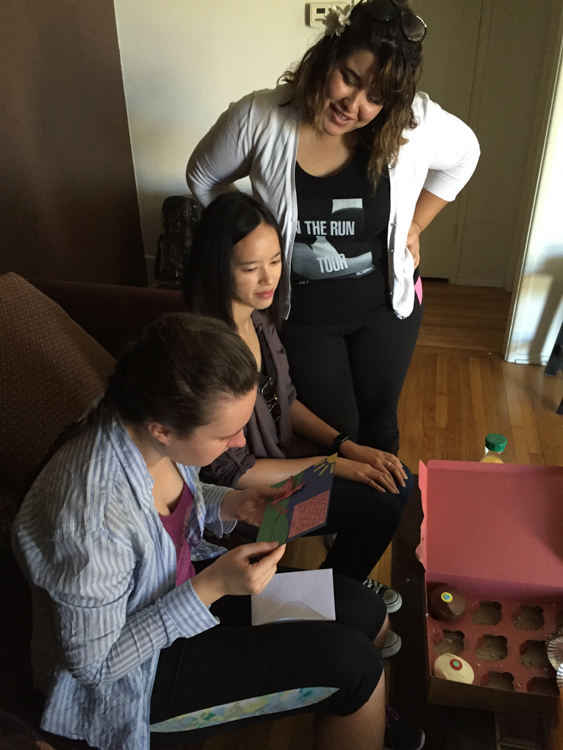 If you didn’t get invited, don’t blame Anela. I organized it, so you can get mad at me. I promise I’ll ignore you and not care.

Anela, gem, Claudia, Tram, and I met early so we could be sure to get to Temecula in time for our tour. Claudia brought some delicious cupcakes. I’ve had banana muffins, but have you ever had a banana chocolate cupcake? I have now, and it was delicious. I also brought some orange juice, water, and homemade egg muffins for everyone. 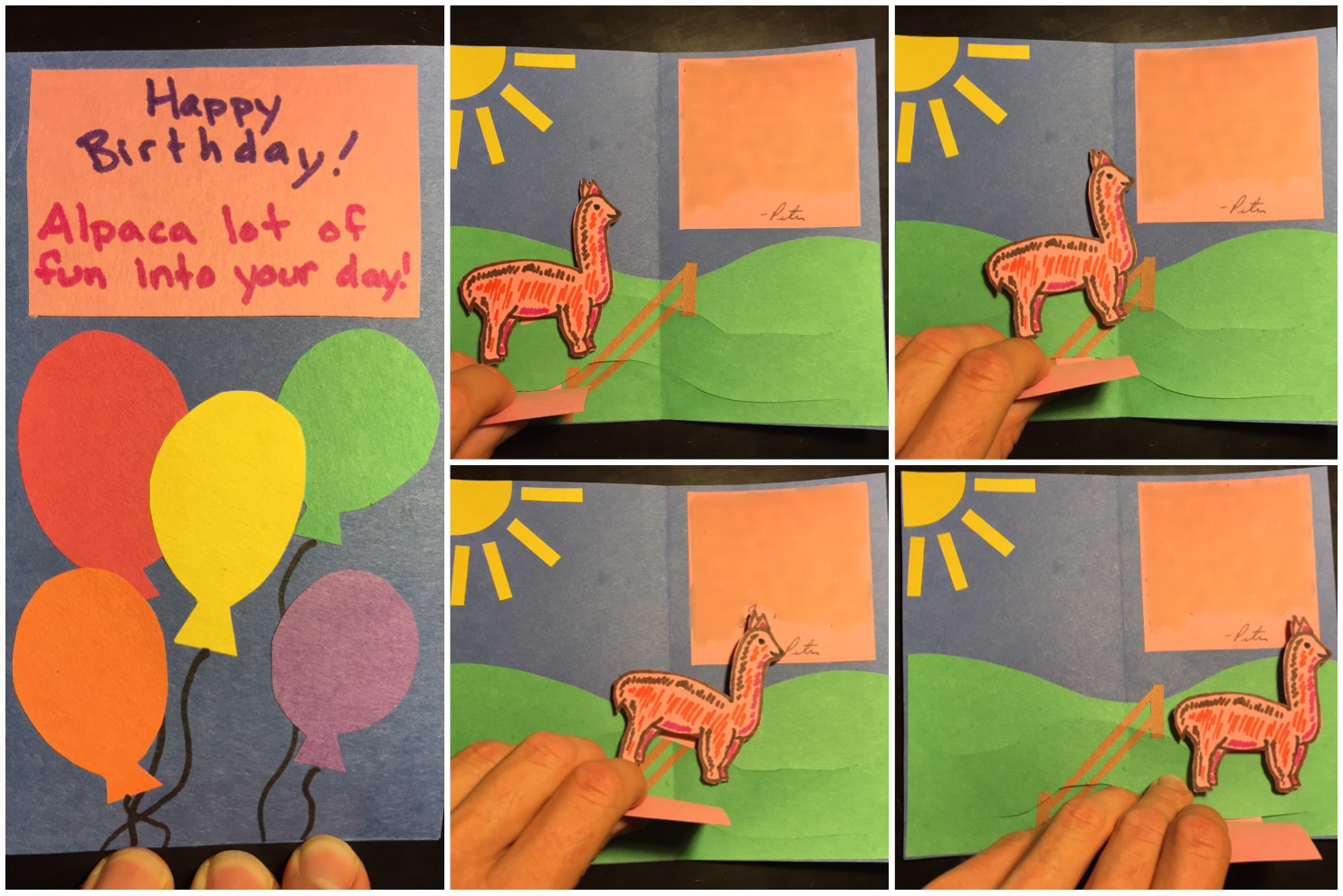 We gave her gifts and cards too. I like making handmade cards, but this was my first attempt at one with a slide and moving parts. The little alpaca jumps the fence. It took a while to figure out the best way to do it, but I’m pretty pleased with the result. 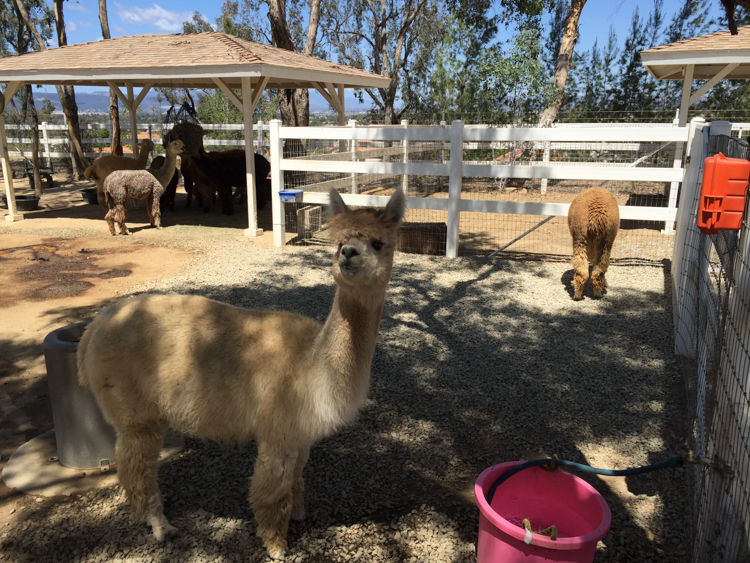 We reached The Alpaca Hacienda about 10 minutes before our scheduled time, which was pretty perfect. Oh man, look how cute these girls were! Tina, the Ranch Event Coordinator, met us and started our tour with a little presentation about alpacas. She was wonderful. I’d been e-mailing with her since December, so it was nice to meet her. These are all female alpacas in this pen that was right next to where we were having our presentation. 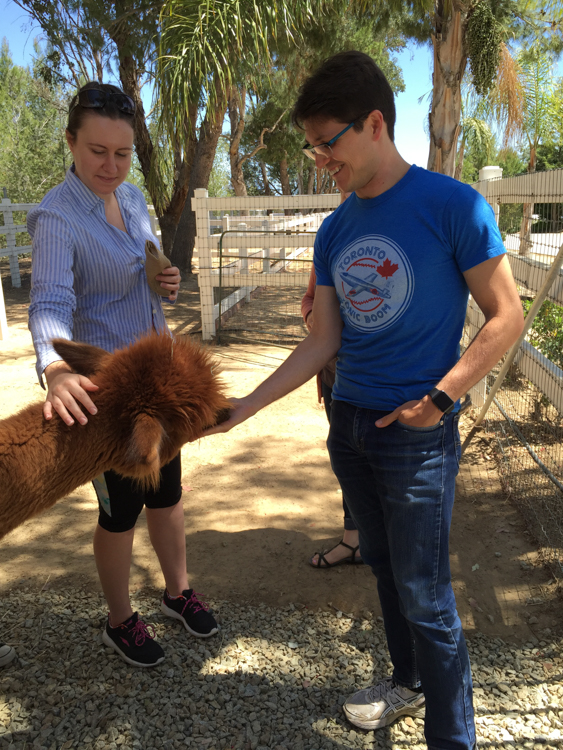 Next it was time to feed Crown Royal! We learned that alpacas don’t really like to be touched, so the best way to get to pet him is to approach slowly and pet him gently while someone else distracts him with food! Luckily we were each given a bag of delicious (at least according to Crown Royal) food! 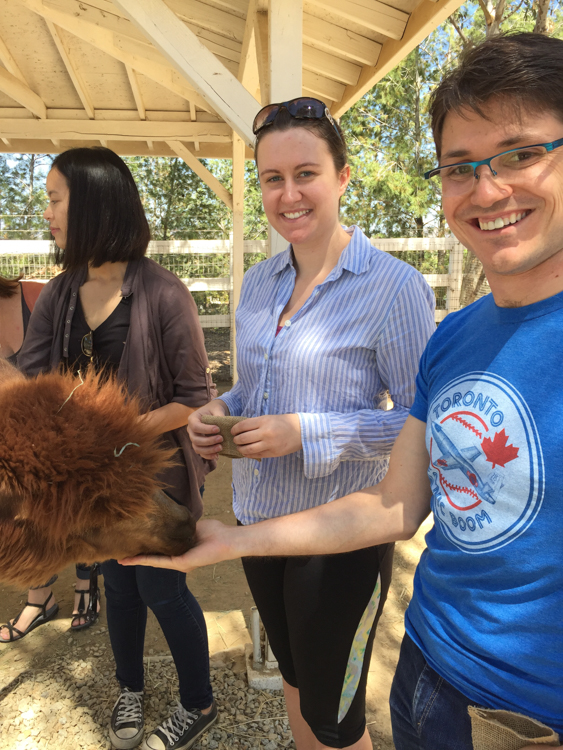 Thanks for the photos, gem. Feeding Crown Royal was so much fun! I’ll admit, my hand was pretty slobbery, but it was worth it. And hey, if you’re interested in having your alpaca breed with him, he’s available! I’m not sure why I decided to Google him, but I did. 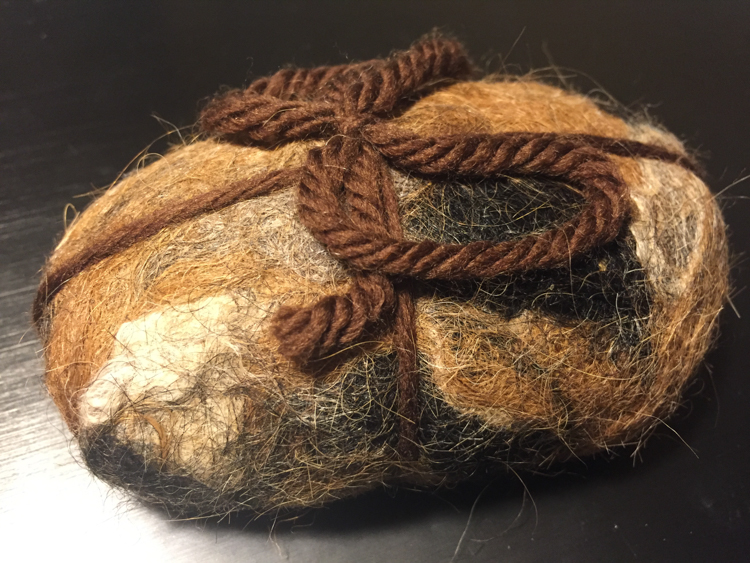 After feeding Crown Royal, we learned a little about felt. One way felt is made is by applying water, pressure, and rubbing. I got the craft add-on to the tour (because of course we want to craft), so we got to make felt – or hairy soap I suppose. We were given some alpaca hair that we opened, cleaned, and then wrapped around a bar of soap with some water. We massaged it and spread it around the soap before finally using string to finish with some flair. We could use it as soap, and as the soap gets used up, the hair will continue to shrink and tighten around it, becoming felt, or we could use it as decoration. I’m going to keep mine as decoration. 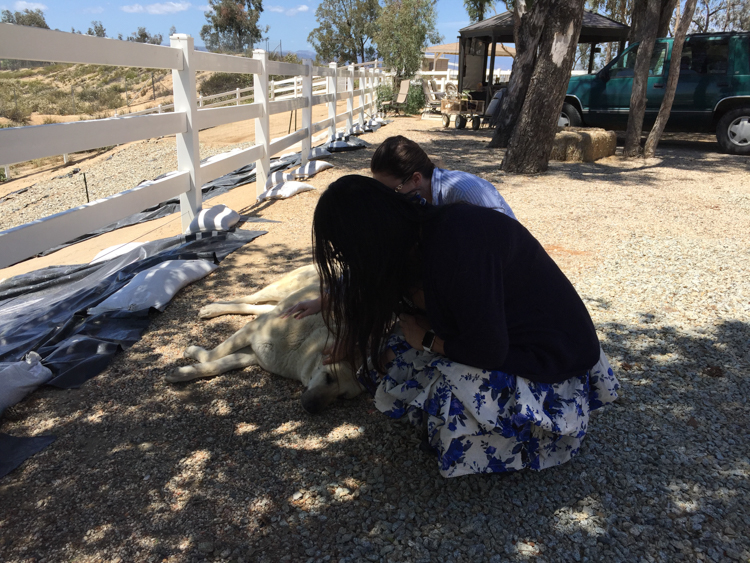 Next it was time to see the males, but we took a detour to pet Dakota. Dakota is a sweet doggy that was all tuckered out. Dakota’s been protecting the alpacas from a coyote! Apparently the coyote has been coming to the ranch regularly. 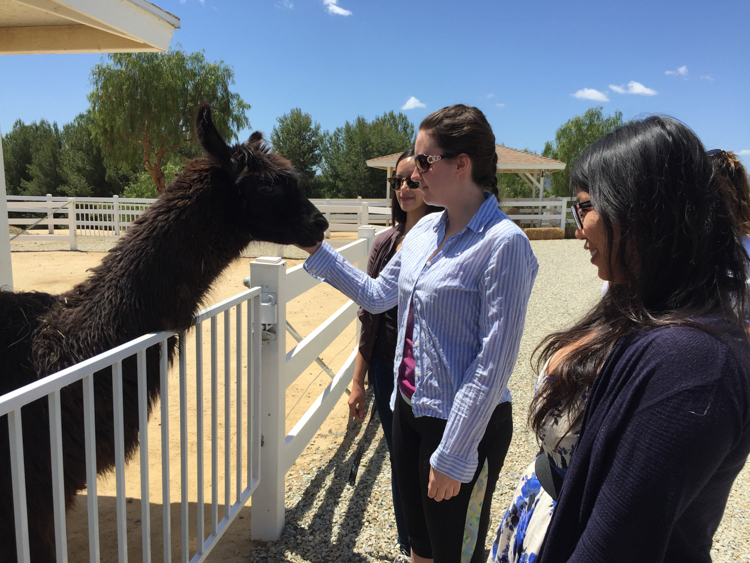 The Alpaca Hacienda homes a single llama that we got to meet as well. Llamas, unlike alpacas, are quite friendly around people. This one really wanted kisses. He’d press up against our faces. I love him. 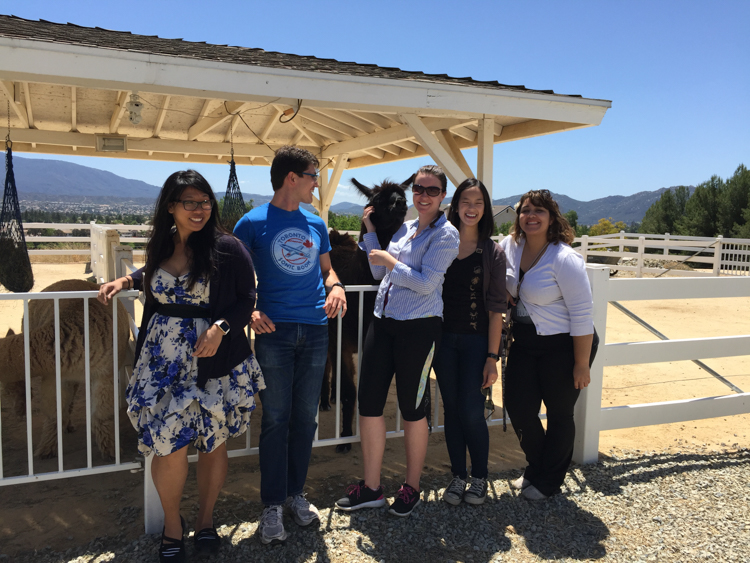 Tina was nice enough to take a photo of our whole group with an alpaca and the llama! What a good-looking bunch, eh? I had a ton of fun at the Alpaca Hacienda and definitely recommend it. We ended our afternoon in the gift shop. They had some fun finger puppets, so I bought a couple for gem. There was also a little alpaca wearing a hat. An alpaca with clothes?! I had to send Anela home with it.

I found a tea place that seemed nice on Yelp, so we headed to Snow & Crab after our tour. It was quite the eclectic restaurant – Cajun food, tea, coffee, and shaved ice. We got a round of drinks and enjoyed some conversation. gem ordered hot horchata coffee with boba. It was actually pretty good! 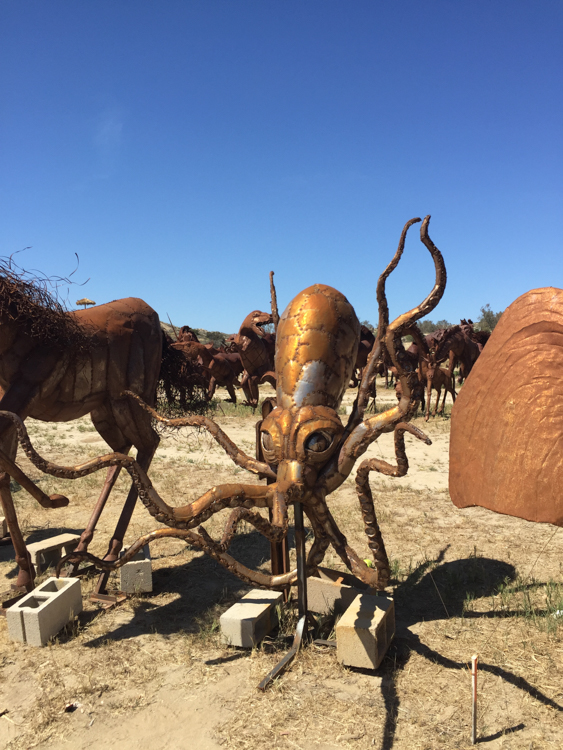 After our little break, we checked out the Ricardo Breceda Gallery & Sculpture Garden! It was twenty minutes out of the way but well worth it. These sculptures were amazing. Check out that octopus in the above photo! 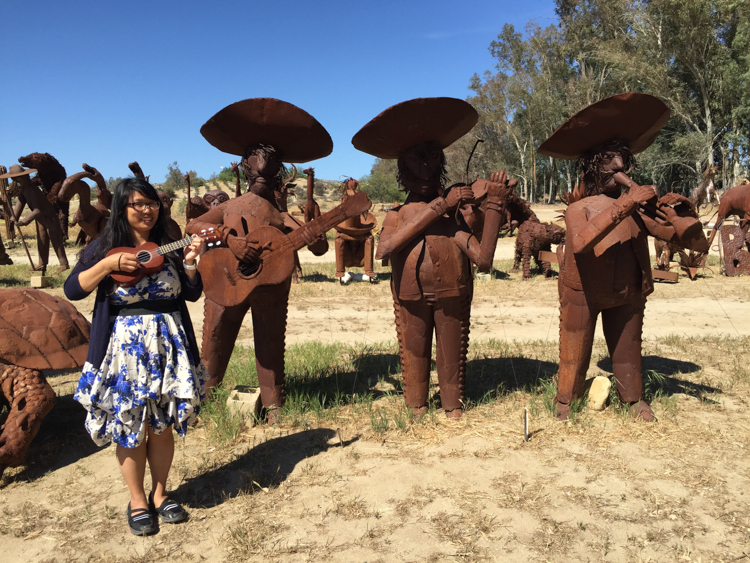 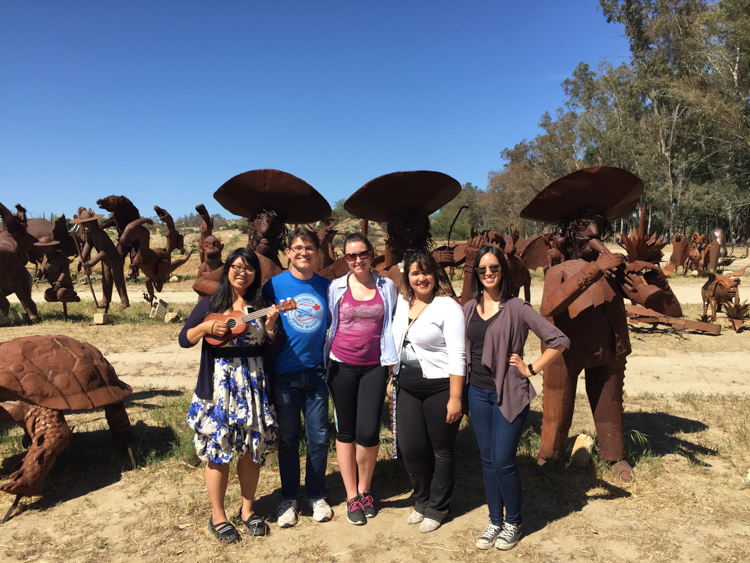 I asked another person at the sculpture garden to take our photo. There were so many different kinds of sculptures from small insects, to life-sized people, to large dinosaurs. They were all very cool. Ricardo Breceda, the artist, said they could take anywhere from a couple weeks to a couple months to create depending on the size. 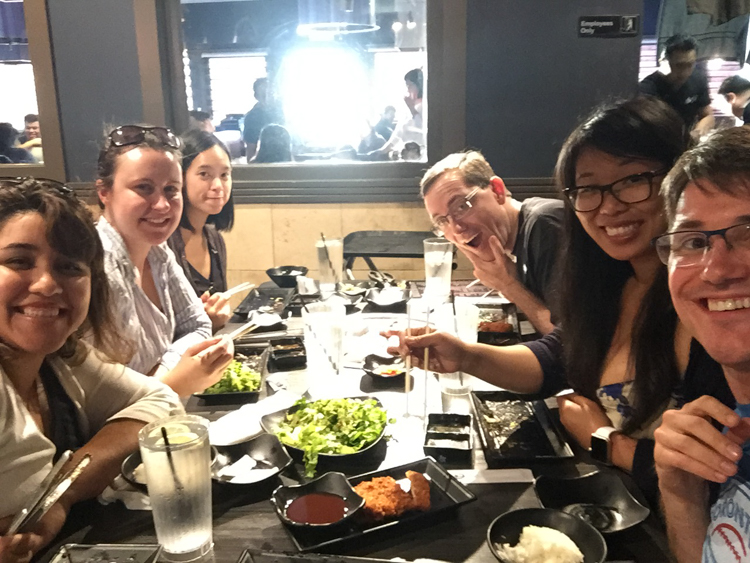 Next we headed back to Orange County to meet Daniel for dinner at Gen. It was time for delicious Korean BBQ! I ate so much, which is obviously customary at KBBQ. We were seated between 5:30 and 6:00 – once again perfect timing. Everything went so amazingly smoothly! 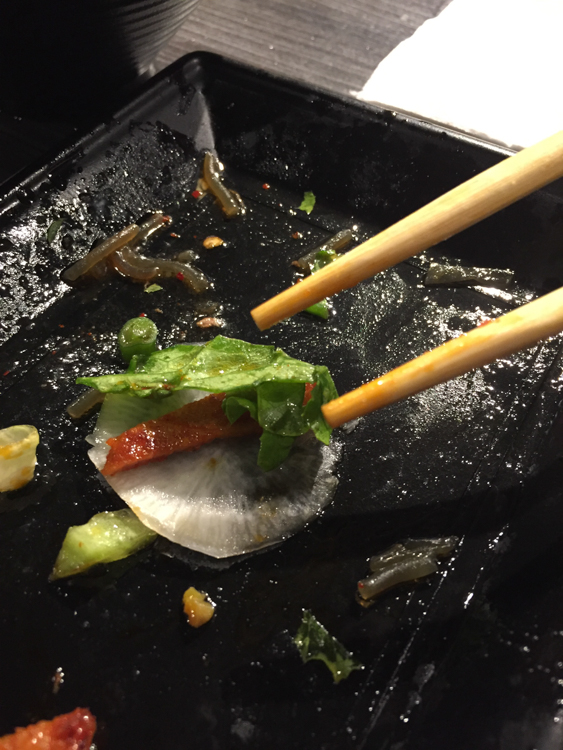 After discussing the video Tiny hamster eating a tiny pizza earlier, gem felt inspired to make a tiny taco. It was cute, but I don’t think it’s quite as a cute without a tiny animal eating it!

Next we rounded out the night at the nearby 7 Leaves Cafe for our second tea lounge of the day. You know what I just noticed as I wrote this post thanks to last years post, Happy birthday, Anela? We went to Gen as well as 7 Leaves Cafe last year for her birthday!

Everything we did that day was fun, and I thoroughly enjoyed meeting and getting to know my three new friends! Most importantly, Anela got to have a fun birthday. Happy birthday! I hope you had fun! 🙂

1 thought on “Anela’s birthday at the Alpaca Hacienda”