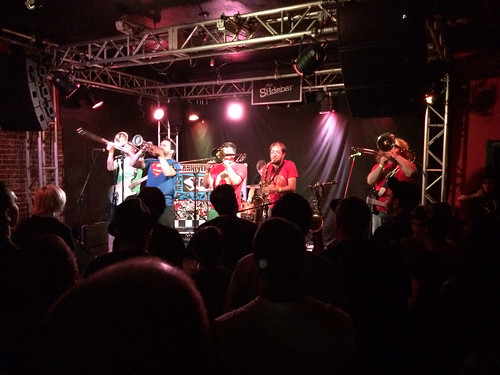 Last night was this month’s Ska Parade Lounge, which also marked the one year “SKAnniversay” of the Ska Parade Lounge at the Slidebar in Fullerton. After work, I went straight to yoga (in which I felt like I really got by butt kicked). I hung out afterwards talking to Sean, the instructor, for a while about music, life, and spirituality, and then headed to Fullerton. I had a lamb pita at Kentro Greek Kitchen, which is just a restaurant or two down from the Slidebar. 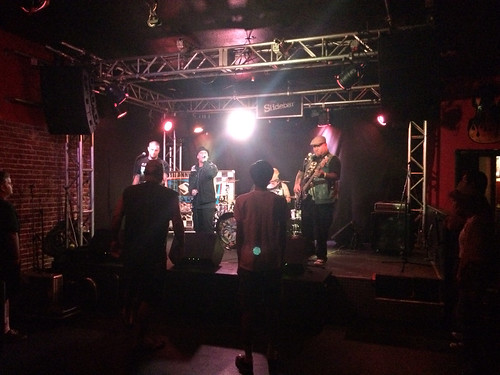 The first band to play was Oceanside Sound System from San Diego. I enjoyed them, and they even gave out copies of their CDs, which was pretty cool of them. The band consisted of vocals, guitar, bass, and drums. 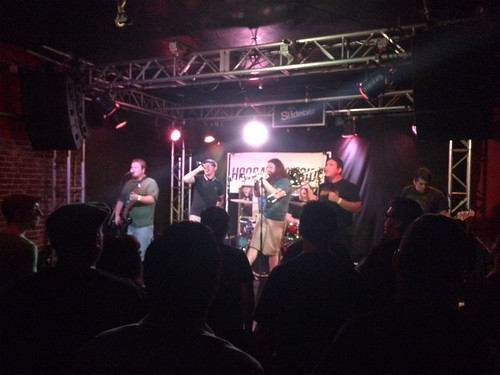 Next up was Hooray for Our Side, a local ska band from Orange County. They consisted of vocals, guitar, bass, trumpet, trombone, and drums. I was happy to see some horns. 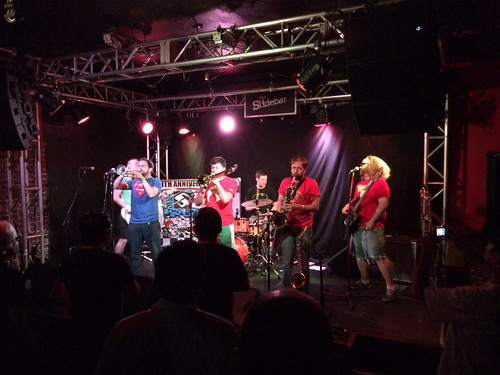 Oh, man. The Holophonics. These guys came all the way from Texas to show how amazingly awesome they are. The band consisted of guitar, trumpet, trombone, sax, bass, and drums with the guitarist and trumpeter both providing vocals. They played a lot of amazing songs, and they do covers too. In fact, I heard a bit of Aquabats sampling in there! It was also cool that they all had DC hero shirts.

Not cool enough for you? You’re not convinced? Not only was the saxophonist switching between two different saxes, but at one point the guitarist and bassist also joined the horns by picking up trombones! Five horns! Amazing! You can see their mega-horn-section in the photo at the top.

They also gave out CDs, which I listened to on the way home. I’m listening to The Holophonics on Spotify now in fact. After their set, I made sure to tell them how much I loved them. So good. 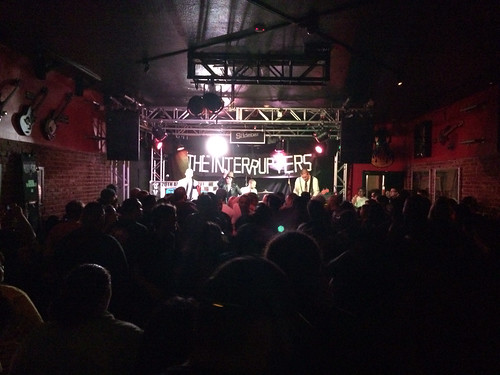 The concert ended with The Interrupters who were also celebrating the fact that their CD was released that same day. I’d seen them once previously, and they great this time just like last time. The skank circle also quickly became full on moshing, including security getting one guy in a headlock. Good times.

It was an awesome night; Tazy Phyllipz did a great job as usual! Friday was Alakazam Comics’ Midnight Madness Sale in which everything in the store was 20% to 80% off normal prices. I was at Yogurtland when I remembered and decided to stop into the store. Of course, I ended up with a large haul.

I’m not even ready to read Siege yet, but this hardcover collection would give me the story in one convenient book. I’ve wanted to read the important events in the Marvel universe with focus on the Avengers. I’ve read Secret War, Avengers Disassembled, House of M, and Civil War. Will, manager at Alakazam, has helped me decide what to read to next, and I purchased Secret Invasion a month or so ago. Despite not having read it yet, I couldn’t pass the chance to get Siege at a big discount.

gem picked this one. Grandville seems to be a steampunk, alternate history title starring a detective that’s an anthropomorphic badger. We didn’t realize until we bought it that it’s the third in a series. gem already started reading it and says it seems to stand alone well, but I still feel like we should pick up the other two.

I’ve been wanting to read this for a while too. Maus is a graphic novel by cartoonist Art Spiegelman. Spiegelman retells his interview with his father about his life as a Polish Jew and Holocause survivor through the graphic novel. It’s won the Pulitzer Prize, so it must be good. I’m looking forward to reading it.

It’s about time I start collecting the color edition of Scott Pilgrim. They didn’t have the second one though. Dang, the sale work! I need to go pick up the second one (possibly this week).

These are gem picks as well, although I’ll be reading them as well. If the Adventure Time graphic novels are anything like the TV show, they should be a lot of fun.

The haul came to a little over $100. On our way out, we filled out raffle tickets before leaving for the evening. But then… …gem got an e-mail saying she won something in the raffle! We headed back to the store later in the weekend;,gem was given the choice of any graphic novel from a box of different titles. I was leaning toward Batman: Earth One, but it wasn’t my call. She asked what Fables was and learned that it was about characters from fairy tales and folklore living in the real world. This particularly novel. Fables: Werewolves of the Heartland is a tale of the Big Bad Wolf. She chose this, and I’m pretty fascinated by it as well.

As a bonus, they threw in two other comics as well. Godzilla: Kingdom Of Monsters issue 1 was interesting. Apparently IDW Publishing created over one hundred variants of the cover for various retailers. You can see Alakazam getting crushed by Godzilla in the comic. The other bonus was Alakazam: 10 Years of Fun, a book about Alakazam created in honor of the store’s tenth anniversary. It contains works from both fans and Alakazam employees and includes comics, prose, poetry, and more. It’s a fun piece of history!

It was a bigger haul than I intended to purchase, but I’m happy! Now the trouble will be finding the time to actually read some of this.