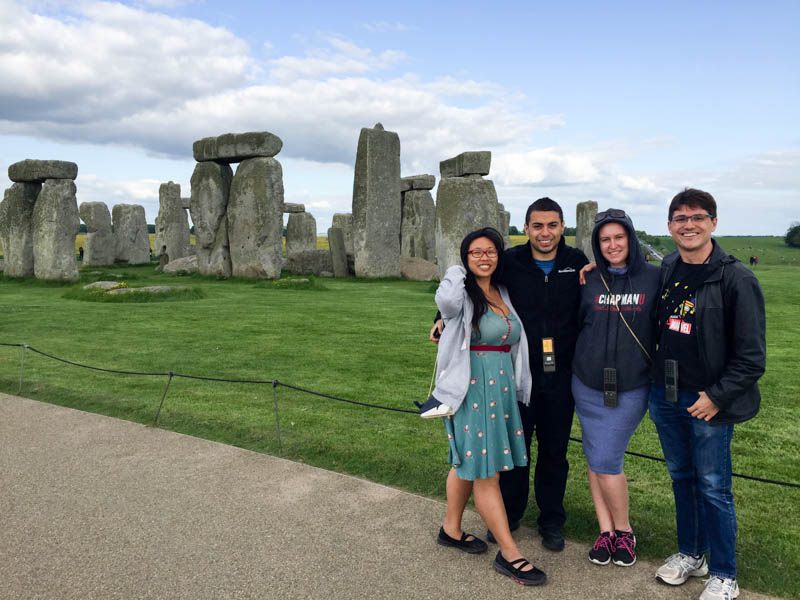 I visited England about 10 months ago, so it’s about time I talk about it. We flew from Copenhagen to London where security was almost as annoying as it is in the US. The rest of Europe was relatively relaxed, but getting into the UK takes some time. After landing, we took a train where we changed in the train bathroom to prepare for our first stop… 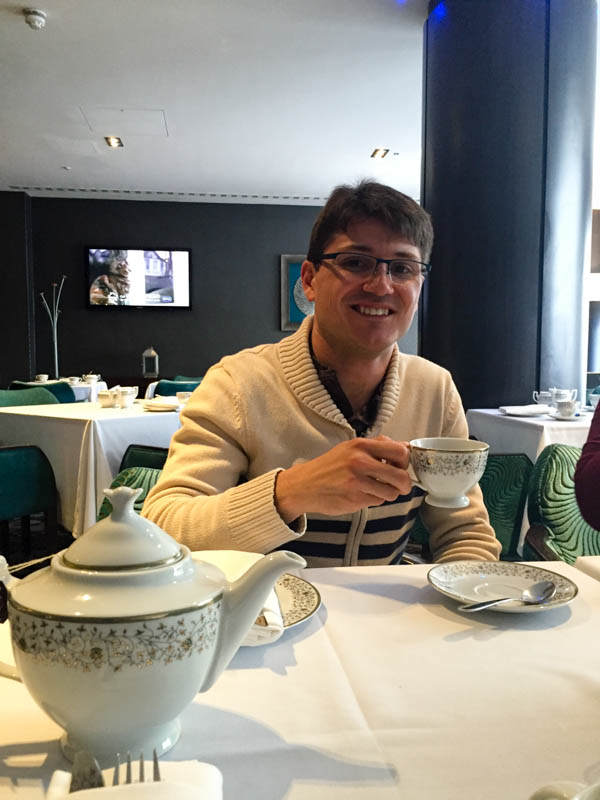 Tea time! We had tea at the Hilton West End. Unfortunately, we had to bring our luggage with us since we were cutting it close, but everything worked out fine. 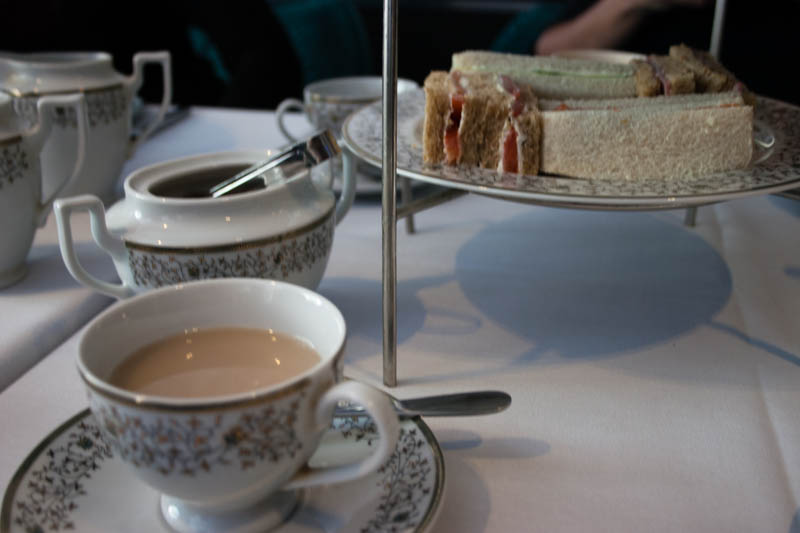 I had Earl Grey tea and tomato, cucumber, salmon, and ham sandwiches. They were all delicious, and it was a lot of fun. 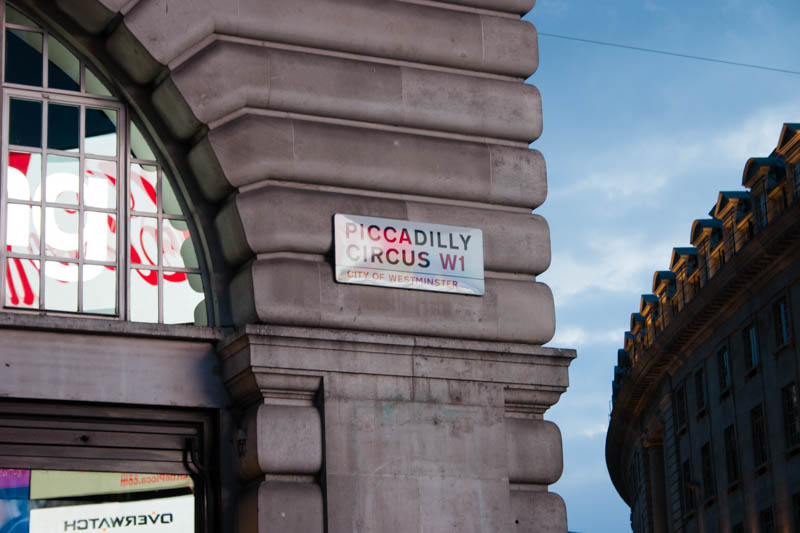 We took a bus to get to our AirBNB and then explored the city a bit. It was kind of fun to see places with names we recognized from the computer game, Hellgate: London such as Piccadilly Circus and Charring Cross. It was also fun to use the real London Undergrounds. I know it’s not special to those who live there, but I was a tourist and I enjoyed it! 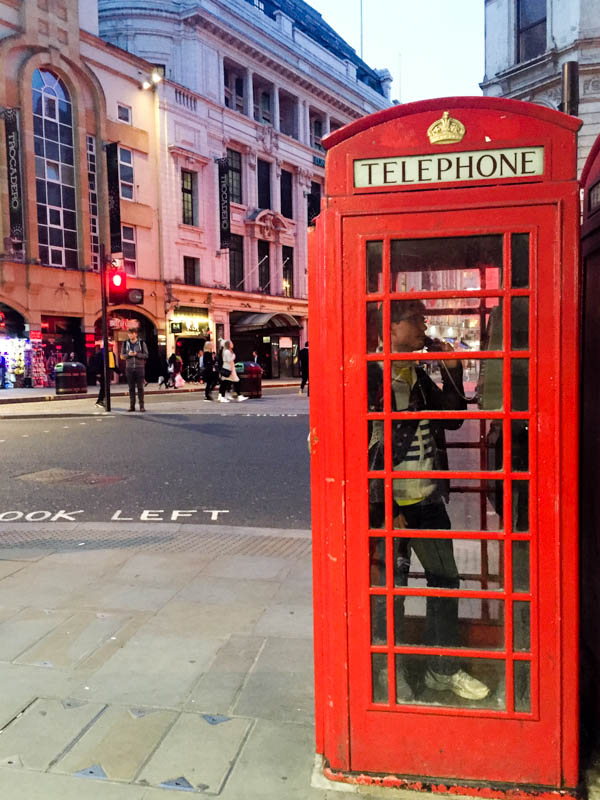 After a quick detour to get photos of each of us in a red telephone box (because how could we not), we stopped at McDonald’s to continue trying McDonald’s in each country. 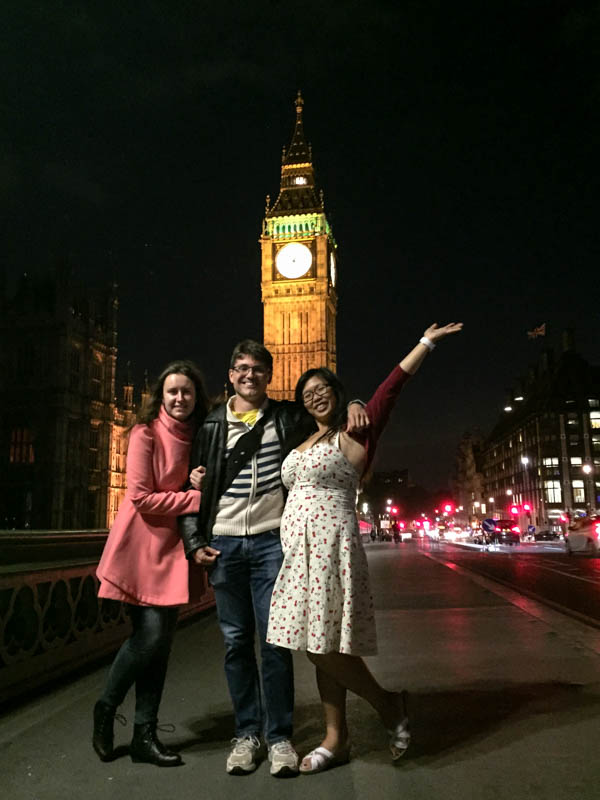 None of my photos of Big Ben turned out great since it was dark, but it was pretty cool seeing it lit up in the London sky. It’s so iconic. We also walked along the River Thames near the London Eye! 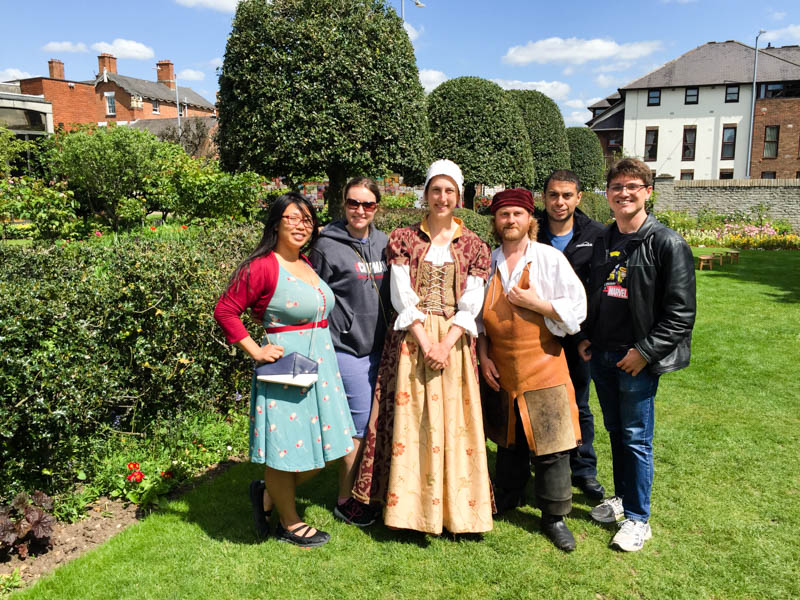 The next day we struggled to figure out the washing machine and then left on our tour of Stratford-upon-Avon, Cotswolds, Bath, and Stonehenge. Cotswolds wasn’t a destination; rather, it’s a lush area of hills and grass through which we drove on our bus tour to the other destinations. First was Stratford-upon-Avon, birthplace of Shakespeare.  We went on a tour of his first home where the tour impressed upon us just how simple of a life it was during that time. They gave us a snack, and we watched some actors perform a short scene. 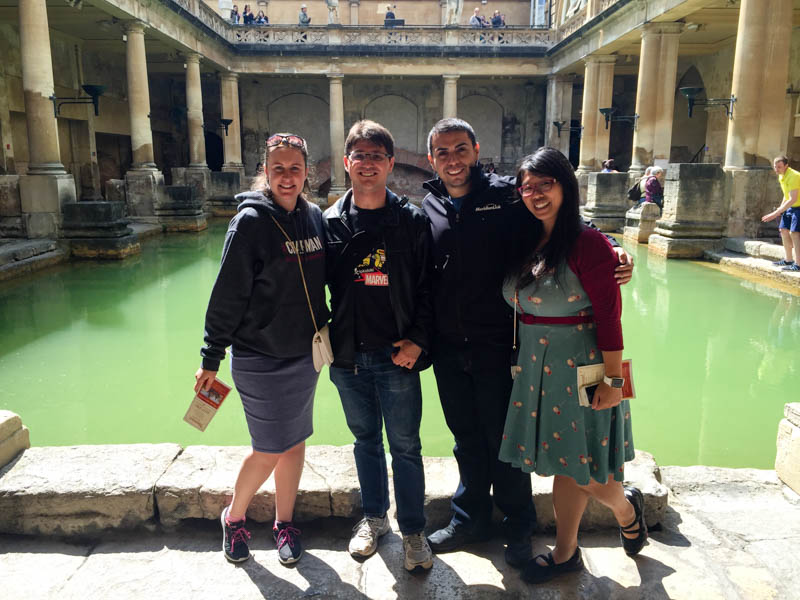 Next we visited Bath where the Roman Baths were built. The water wasn’t so pretty now, but at one time, people visited to bathe in the waters. The architecture was cool, but more interesting was some of the classic art – statues, tools, coins, scrolls, and more. The writings were mostly simple lists – debts and, if I recall correctly, a list of suspects from a crime. 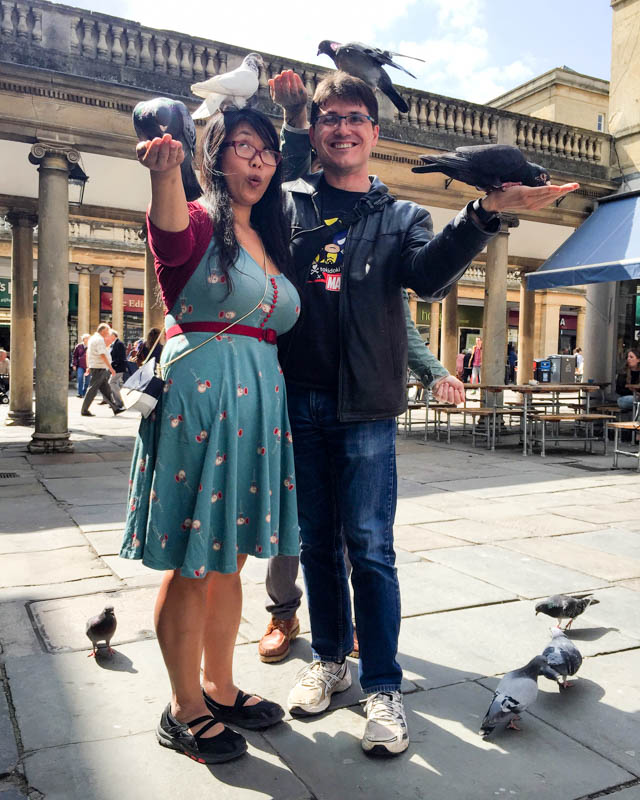 Outside the baths was a street performer who set birds all over us. As gem and I had recently played Hatoful Boyfriend, a computer game in which you play as a young woman in a world now run by birds (it’s from Japan, okay?), we were quite excited. 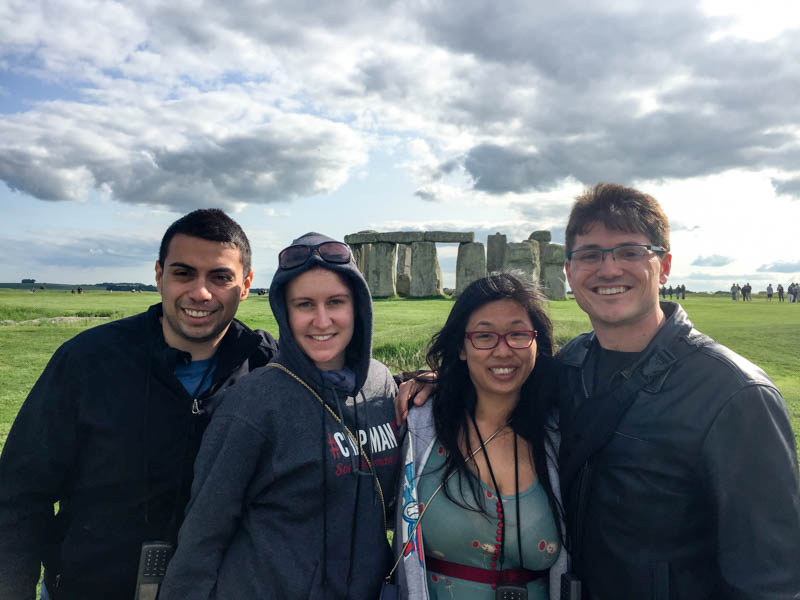 Stonehenge was the last stop on our tour, and likely with good reason. This was the main attraction. It was really awesome seeing such a well-known icon up close. At the same time, and I think this applies to a lot of things, it’s less idyllic in person with huge groups of people wandering around. Of course, you can’t actually get close either. 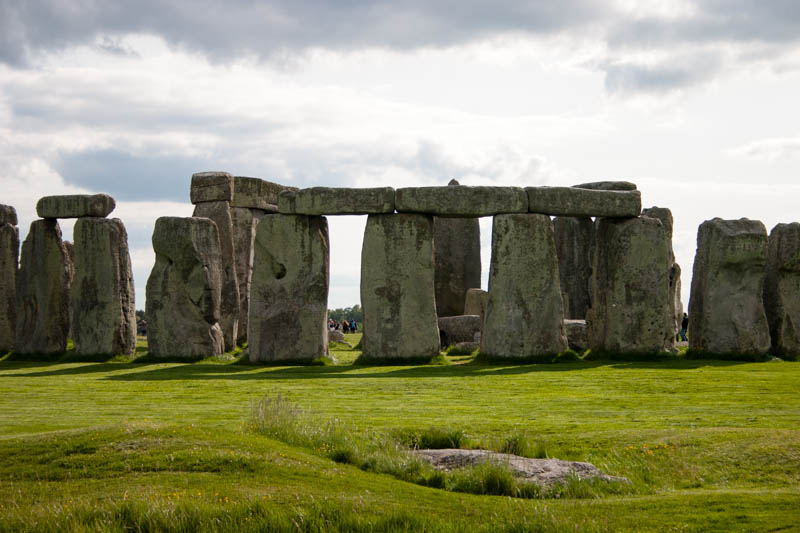 There was an audio tour you could use while walking along as well. I used it and listened to a large portion of it, but honestly, nothing I learned really stuck with me. If you visit, I think you could safely skip it. 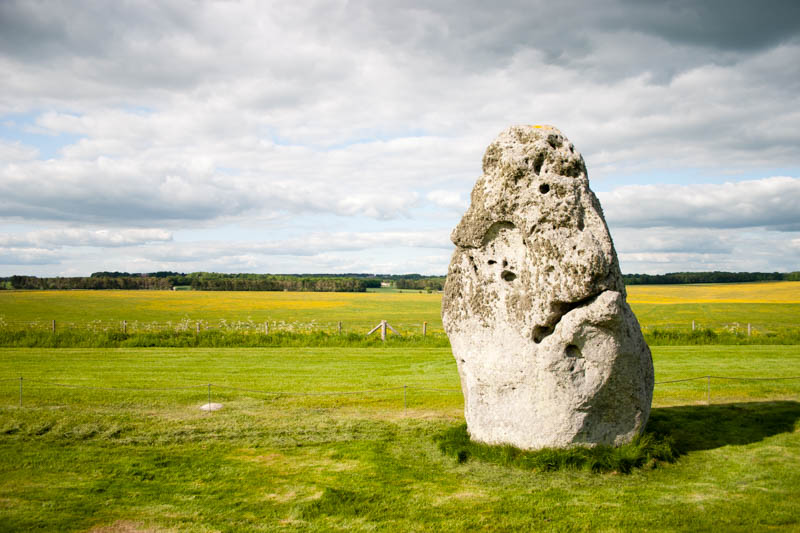 I do, however, remember the audio tour causing me to focus on the rock. What did it say about it? I have absolutely no idea. But I like the photo. 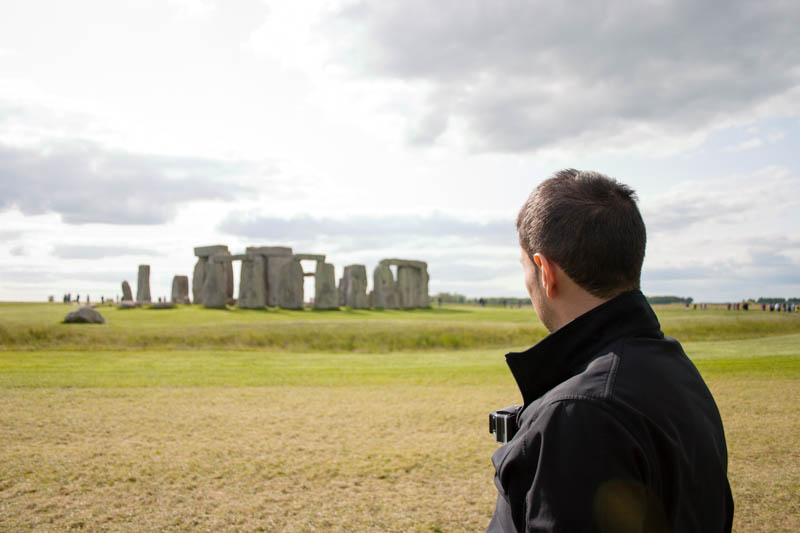 I also really like this photo of Antonio gazing at Stonehenge. What do you think he’s thinking about?

When we got back to London, we needed to go shopping. Anela had torn her jeans and needed a replacement. Irish John and Steve, our tour guides, were really nice. They offered to drop us off last near a store. After making her purchase, we went in search of dinner. We ended at Simply Indian, a delicious Indian restaurant in London. It was super delicious – one of the better meals we had on vacation. I have to be honest though; we had a lot of great food! 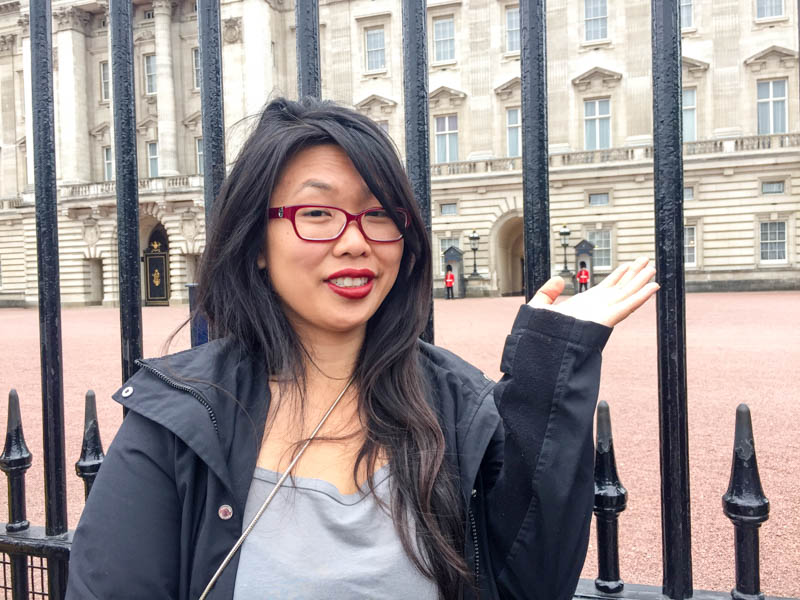 Our goal the next day was to see some British guards! Look, gem holds one of the tiny guards on her palm. 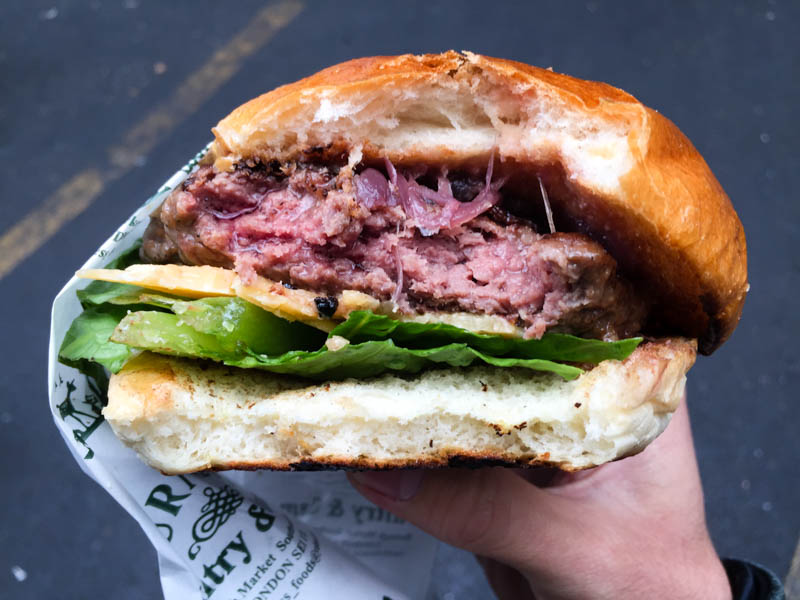 I’m getting ahead of myself. First on the agenda was a place Antonio suggested – Borough Market. There was cheese, olive oils, vinegar, honey, sausages, and even brownie samples. I ate a venison burger, more Indian food, a meat pie, and had some tea. After eating, we split up because one of us forgot our phone. I don’t even remember who it was or who went with who at this point. However, I knew how to use the underground to get back and then get where we were going to meet.

We were meeting at the Lush flagship store, across the street from a Uniqlo, about two blocks from where we’d get off the underground. Awesome. Easy enough, right? Not quite. I thought I followed the directions, but it didn’t seem right. As it turns out, a couple blocks in either direction was Lush, each across the street from a Uniqlo. What the heck?! We eventually found the correct Lush, and I had a great chat with a woman working there who’s actually half Greek. 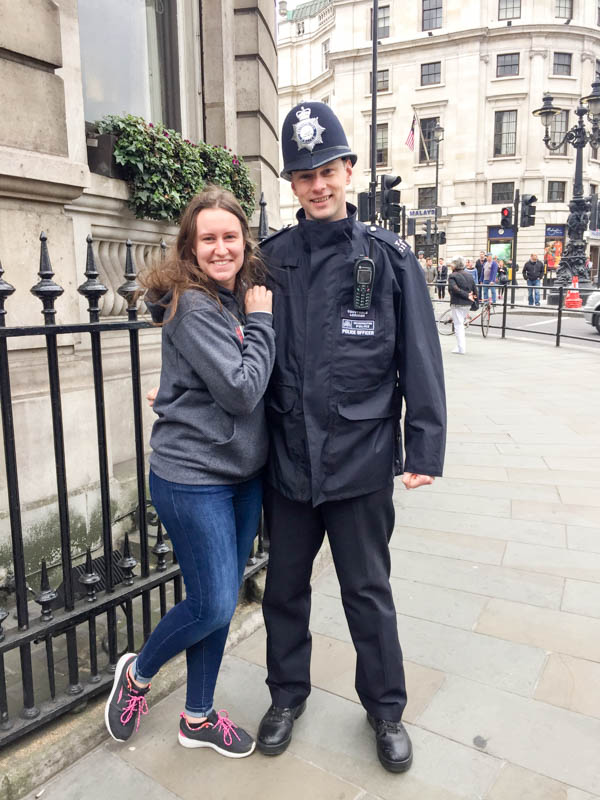 Now it was off to Buckingham Palace and Whitehall for the changing of the guards. Anela really wanted to be able to go up to a guard who can’t respond like in films, but that’s not possible anymore. She did get a photo with this officer though! Who doesn’t like a man in uniform? 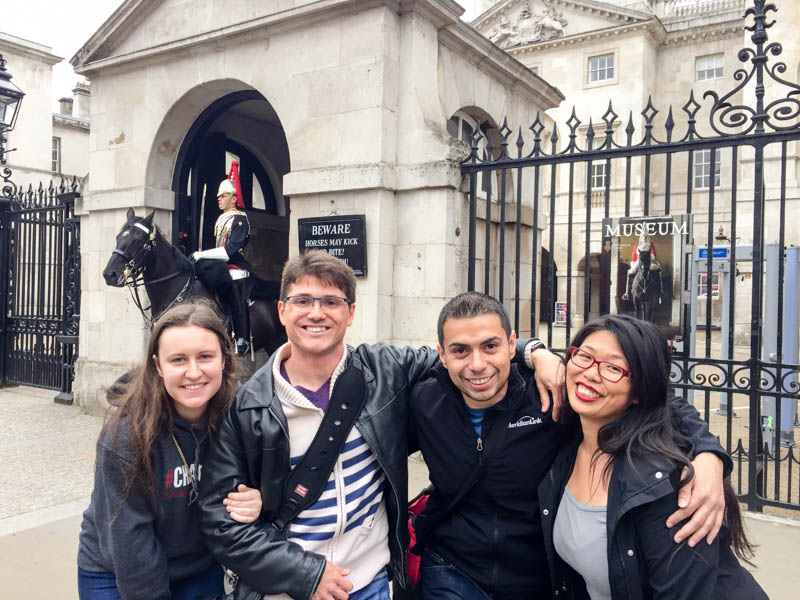 I believe this is the four us at Whitehall for the changing of the guards. It was fun! 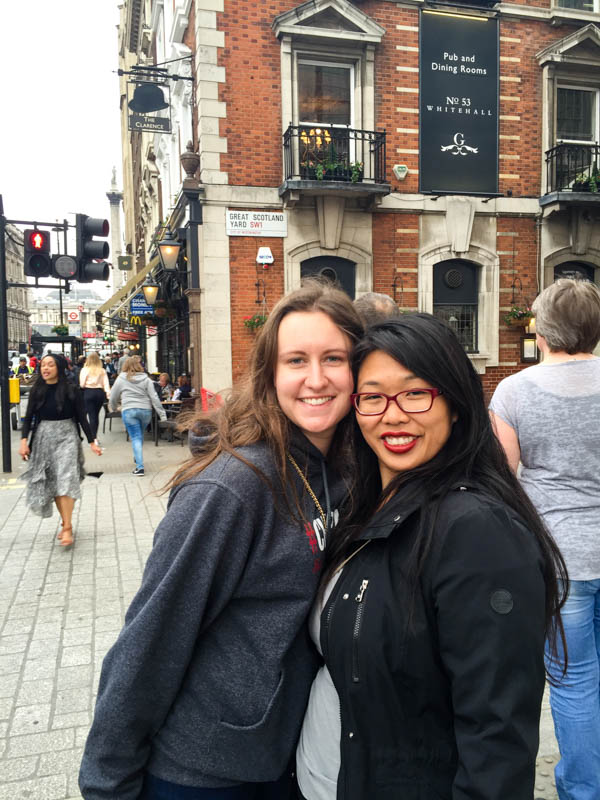 With our mission complete, we did a little exploring and wandered the streets. 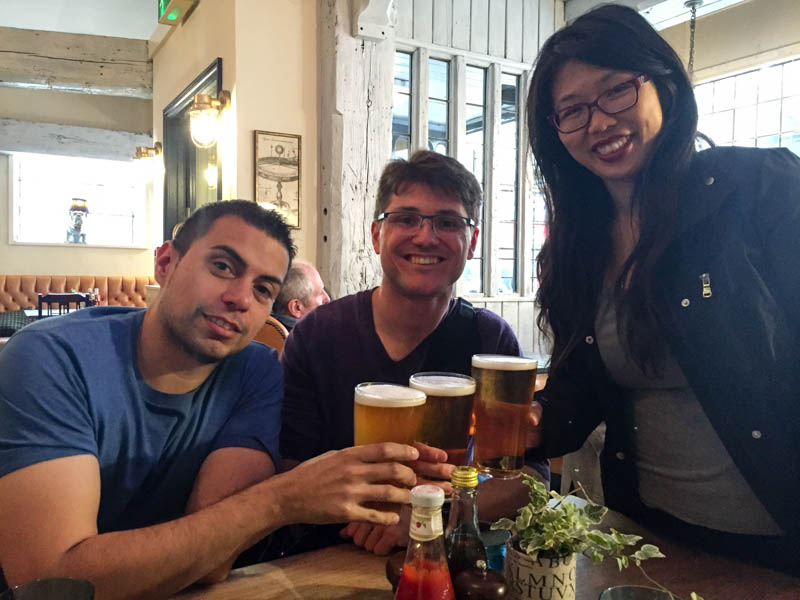 We decided we definitely had to have some fish and chips while in London, so we stopped here at The Clarence for a bite to eat and a beer. 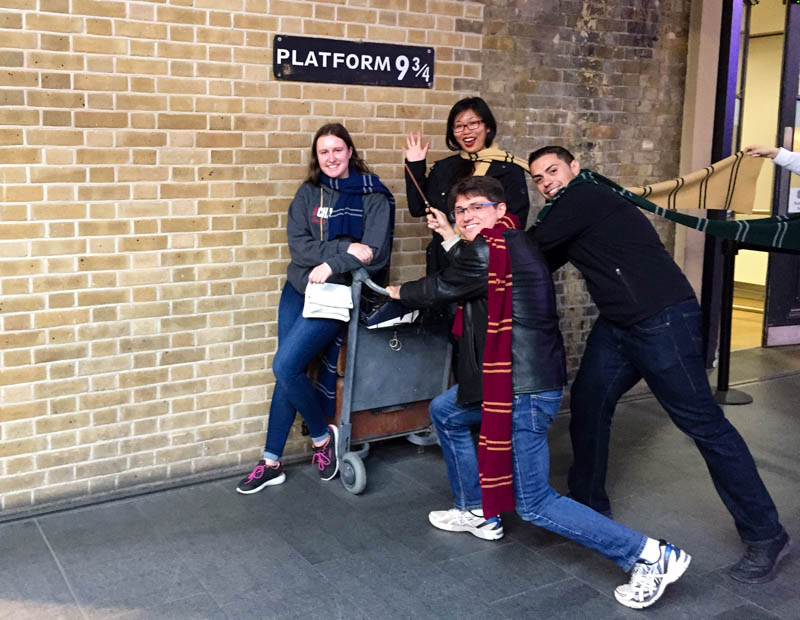 While we were in London, we decided to try to sneak to Hogwarts. We found Platform 9 3/4 and pushed our way through! There was a bit of  line, but I enjoyed chatting and watching others have fun when it was their turn. If the participants are willing, they have each person pose once as if walking through and another jumping. They also have participants focus on the professional cameraman as well as their own. On top of that, they let us take group photos and individuals photos. It was pretty cool! 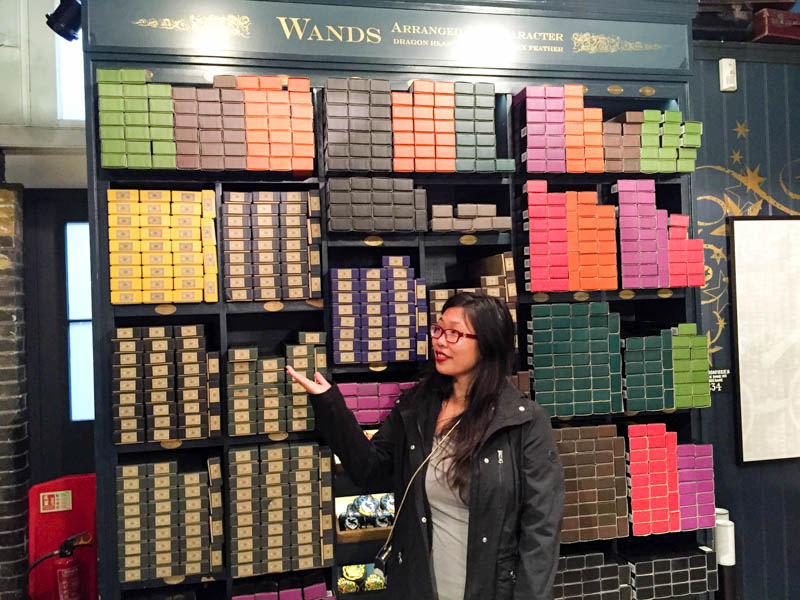 gem did a little shopping for a wand. So many choices! We didn’t actually purchase a wand, but it was fun to shop. We also met a cosplayer who goes by La Espada de Obi Wan in line. He specializes in Obi-wan and The Doctor. You can find him on Facebook as La Espada de Obi Wan!

After looking at all the goodies in the Harry Potter store, we went in search of the door used as Sherlock’s door in the show. It’s not a show I watch, but I was happy to go too. gem was certainly excited! 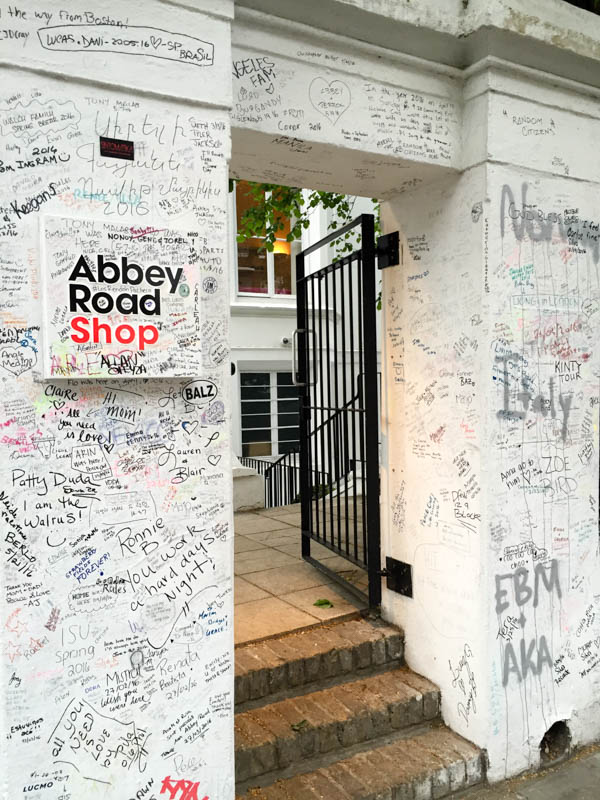 Our final major goal was to visit Abbey Road. There was a designated wall on which people could write or draw, which was pretty interesting. There were a decent number of tourists, but it wasn’t packed. I do feel bad for the poor drivers who just want to drive down their street! 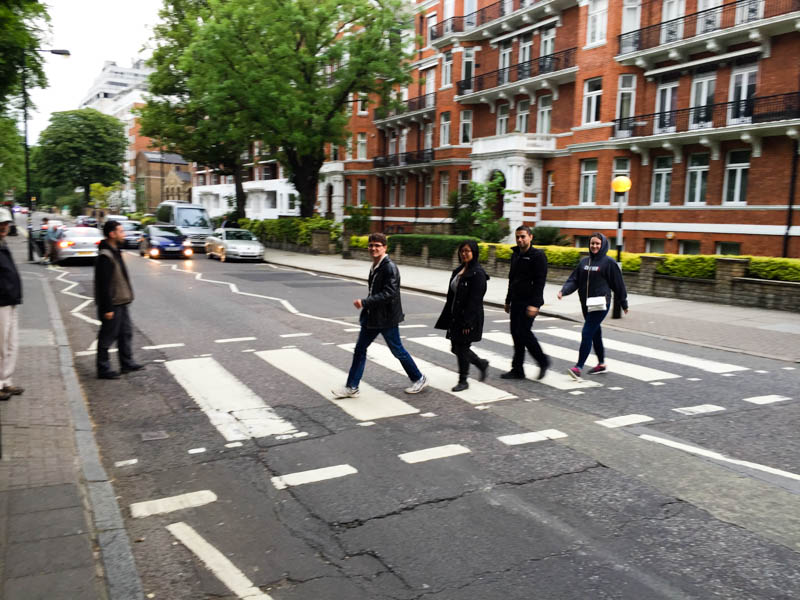 This is the best photo I have of us. Yeah, yeah, I know we’re walking the wrong way when compared to the Beatles. We also met a tourist there who loved the Beach Boys. He must have spent at least five minutes talking about how much better the Beach Boys were than the Beatles. He wasn’t mean about it or anything, but he was certainly opinionated. His wife seemed less than amused.

We finished at Abbey Road, and moved on to exploring Soho. We ate our second fish and chips meal of the day and then grabbed some coffee at the Soho Grind, a very pleasant location.

After a good night’s rest, we quickly visited Borough Market again in the morning before heading to the airport. I had a salad, and then we prepared for our flight. Unfortunately, by luggage was overweight, so I had to check it. It wasn’t a problem though, and then we were off to Dublin!

Thanks for the memories, London!