Last year was another year of really loving Hamilton it seems – along with some pop and instrumentals.

This visualization is a little off because it’s based on data from the last 365 days and not 2021, but it’s close and I like it.

My top tracks mostly make sense given the top albums and artists, although there are few stragglers – numbers 9 and 10 don’t have artists or albums that show up on my top ten lists.

Spotify Wrapped gave some interesting bits of information, but I don’t think it reports as clearly as Last.fm – plus, Spotify only considers data from 1/1 through 10/31.

I really have no idea what this means. I don’t think I’ve ever thought to myself “time to listen to some spooky and bold music.”

This, on the other hand, seems super accurate! I didn’t even realize how accurate it was, but now I love it.

As for live music, 2021 was obviously better than 2020. I went to one concert – The Aquabats, The English Beat, and Dead Man’s Party; it was awesome! I saw one virtual concert – The Aquabats! Legion of Righteous Comrades! You Pick the Set List! Livestream Concert! That title sure had a lot of exclamation marks. I saw a singer/guitarist at a small event.

And I can’t leave out more Hamilton! I saw Hamilton at the Pantages twice in 2021!

We wanted to go to the Adult Swim Fun House again, which meant another line for tickets. The couple in front of me were super awesome, and I had a great time getting to know them. 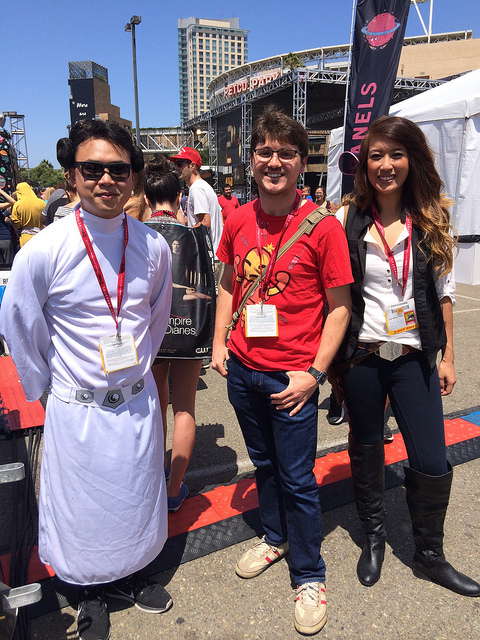 They cosplayed as Leia and Han Solo. Apparently they had cosplayed as Indiana Jones and the boulder earlier (with the woman cosplaying Indiana Jones). It sounded awesome. She showed us a photo on he iPhone, but it was hard to see. Her cousin is a Master Builder at Legoland! What a cool job, eh?

Tazy Phyllipz shared photos he took at SDCC on Facebook, and I found one of them as Indiana Jones and the boulder! Awesome! 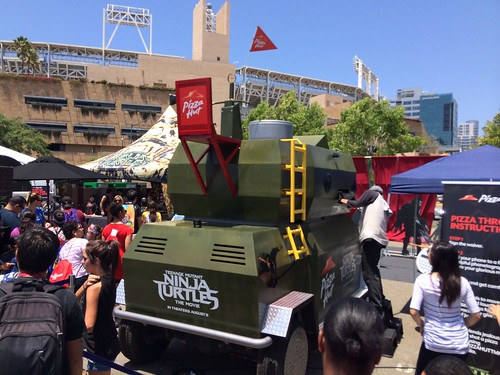 There was also a Pizza Hut sponsored TMNT Pizza Thrower. I had this toy as a kid and wanted to launch pizzas with it at Comic-Con, but I was second in line when they closed it for lunch. Oh well. I did get some free pizza courtesy of Pizza Hut though. 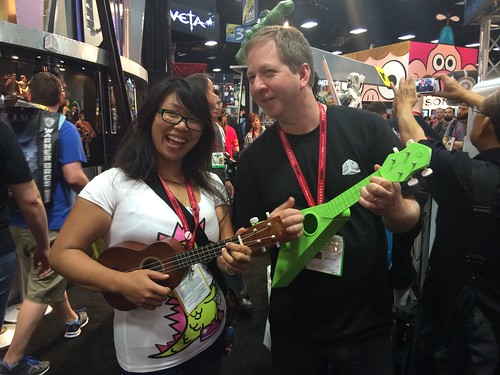 There was a booth promoting their 3D printers, and they had a 3D printed ukulele. gem was, as you’d expect, pretty thrilled. We asked a lot of questions, and they talked to us both about 3D printers and the ukulele. I think they got a kick out of gem having her ukulele and being so excited too.

At the Nintendo Lounge, gem and I played Phoenix Wright vs. Professor Layton. I’m looking forward to the game because I love both of those series. It’s pretty amazing that it happened at all! 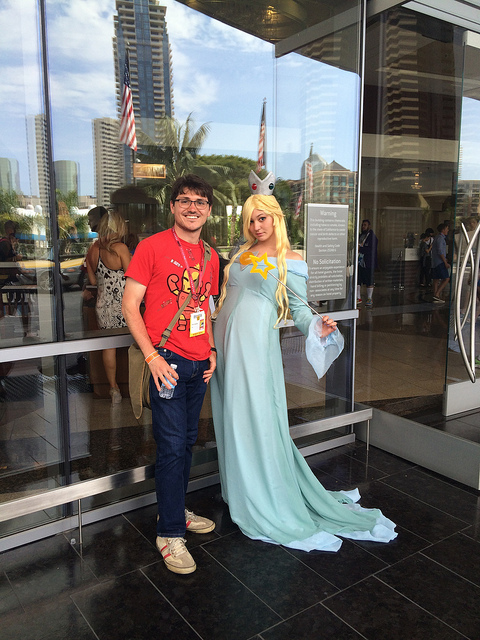 I saw a beautiful Rosalina cosplay from Super Mario Galaxy, and the woman agreed to take a photo with me. She looked great!

We were craving pizza, so we ate at Pinzimini in the hotel and got some superhero-themed pizzas.

After dinner, it was back to the Adult Swim Fun House and the Meatwad Full Dome Experience. The staff remembered us again, and we chatted a bit. There was one exit to the fun house we had never used – the karaoke cage. They only let you out if you sing. We aimed for it and managed to get that exit this time. Antonio avoided it and went out the cat butt again. gem and I sang Spice Girls‘ Wannabe to get out. It was fun! We got our free t-shirts again, and the staff member with whom we became friends asked us for a favor: he wanted a t-shirt for his friend. They were out of the exact size he needed, but we still managed to get a t-shirt for him to give to her! 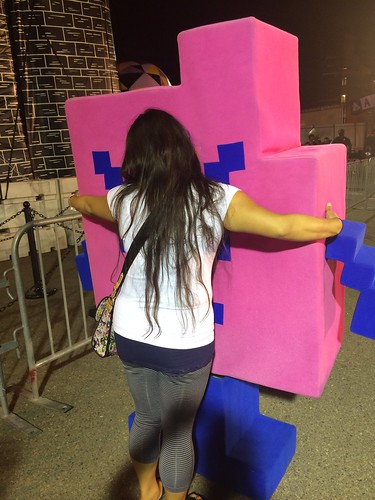 On our way out, we saw a mooninite! gem asked for a hug, and when she hugged it, she mentioned that she smelled good, causing the actress inside to giggle. 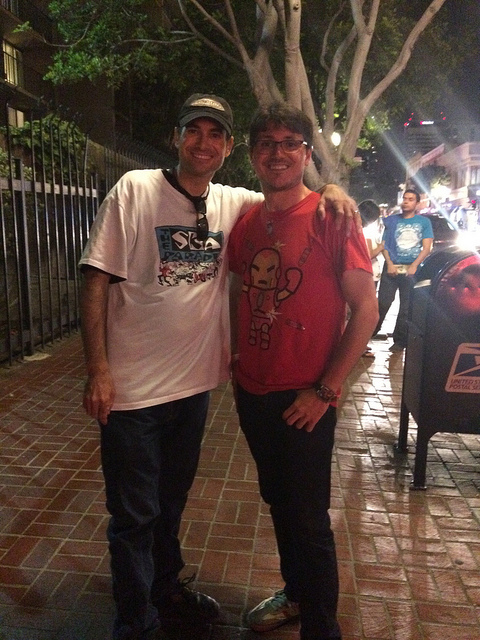 On the way back to the hotel, I noticed a Ska Parade t-shirt, and then I noticed that it was actually Tazy Phyllipz! Ska Parade is an Orange County-based ska radio show, and Tazy is the host. He also holds Ska Parade Lounge events once per month at the Slidebar in Fullerton. It was pretty cool to run into him, and I think he was excited to get recognized as well. We talked for a few minutes. I told him about the Aquabats show and even showed him the Martian Girl cosplay, which he enjoyed. It also turned out that he booked the bands for the OC Park Summer Concert Series, and he suggested I come on Thursday. I was already planning on it because I like GOGO 13. He dropped some hints about some other things happening that I’d enjoy too. 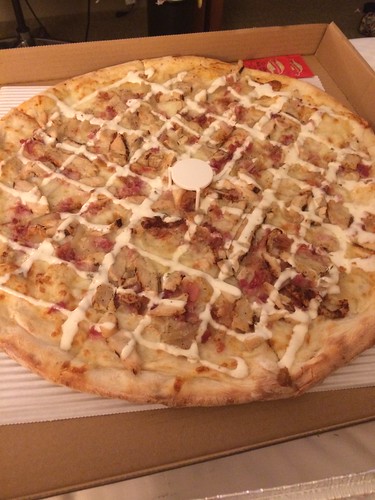 We ended the night with duck rolls and a bacon chicken ranch pizza from The New Yorker. Delicious! While we ate, we watched Adult Swim. I guess their marketing worked. I’m not sure I’d ever seen a full episode of the Boondocks before, and it was hilarious!

And then I slept!

You can also read about the last day here: