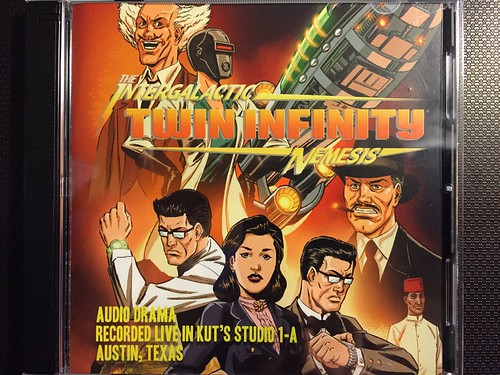 Sunday afternoon gem and I saw The Intergalactic Nemesis: Twin Infinity at the Segerstrom Center. I saw the first two in 2013 (and wrote about them) and have been eagerly awaiting the third.

The Intergalactic Nemesis is a live-action graphic novel. The panes of the comic, minus the speech bubbles, are projected sequentially on a screen while three voice actors perform all the dialogue live. They’re accompanied by a Foley artist and pianist. The performers are all a little more than their roles as well because they use gestures and facial expressions even though it’s also conveyed through the graphic novel. It’s really fantastic. All three books of Intergalactic Nemesis have audio drama as well as live performances. The first two have graphic novels, while Twin Infinity’s graphic novel isn’t yet released. There’s also a podcast spinoff that’s getting released as a novel soon too.

Book One: Target Earth is available on YouTube. Maybe it’s be easier if you just checked it out. The YouTube videos were produced by KLRU-TV, Austin PBS. I enjoy seeing how the content is adapted into different mediums. While the YouTube videos are recordings of a live performance, it’s still a difference experience in that the video is segmented so you can see multiple things at once. It’s a cool solution. 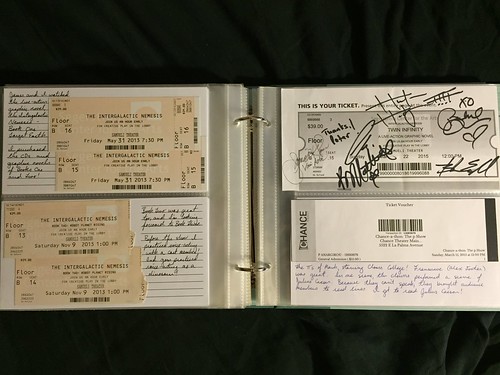 After the show, I had the performers sign my ticket so I could put it in my ticket scrapbook with the tickets to the first two shows!

Before the show, they had some fun activities. At the Foley station, gem and I watched a short animated video to get an idea of what was happening and then made the sound effects while they recorded us. We used a wind machine, rain sticks, shoes on a board, and a thunder sheet. After we were recorded, they played the video back again, this time with our sound effects. Being a Foley artist must be really fun!

There was also a voice-acting booth with Jamieson K. Price. He’s a voice-actor with a long list of credits including some Blizzard titles. He was Ga’nar, known to Horde players as a rather important orc in Frostfire Ridge! gem and I took turns reading lines while Jamieson added altered our voices. He was really nice, and I had fun chatting with him. We even got the chance to talk to him after the show, too!

I haven’t yet listened to the audio drama version, but I’ll do that soon, and then I can check out the podcast! Each medium is a bit different, but they’re all excellent. I highly recommend The Intergalactic Nemesis! 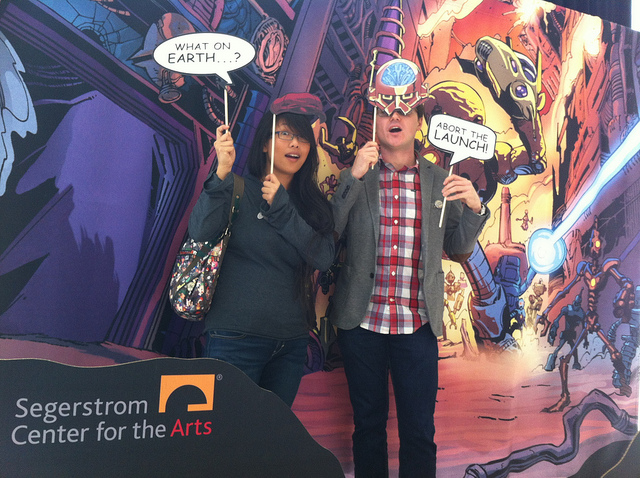 I saw The Intergalactic Nemesis: Book Two – Robot Planet Rising, the live-action, graphic novel, radio drama, today at the Segerstrom Center. It was a ton of fun. 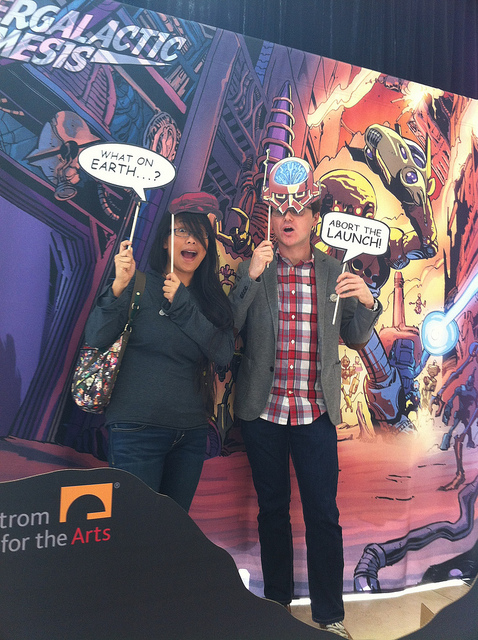 We got to take some photographs, but that was actually the second thing we did. First, we did some voice-acting.

gem wanted to be an evil dinosaur, and Joe Ochman helped show her how. She was very excited to do her evil laugh!

I played the sidekick. I tried to act like a young, eager guy. It was a lot of fun.

Of course, the show was excellent as well. I love the way the cast interact on a layer above the characters as well. I’m looking forward to reading the graphic novel and listening to the radio drama to see how they differ. Hopefully I get to see Book Three performed eventually as well! Friday night I saw The Intergalactic Nemesis Book One: Target Earth, written and directed by Jason Neulander, at Segerstrom Center for the Arts with my brother, James. I had purchased tickets to see it with gem, but she had to travel on business. It’s a live-action graphic novel. Have you ever heard of that? As soon as I did, I knew I had to see it. The show consists of panes of the graphic novel being projected one at a time, live piano accompaniment, live sound effects, and three actors performing the characters. It’s live radio drama combined with a graphic novel!

The story involves a lot of funny science-fiction stereotypes. In the 1930’s a journalist and her assistant get caught up with aliens, robots, time-travel, invasions, and more. It’s an amusing story that’s very entertaining, especially if you’re familiar with older science fiction or classic sci-fi radio drama. I’m thankful that I’ve listened to Space Patrol, the radio space opera from the 1950’s, because it definitely helped me to appreciate The Intergalactic Nemesis.

The production was amazingly fun. While the visuals were supposedly the panels of the graphic novel, the voice actors used gestures and facial expressions as well. Even the woman performing the sound effects, woman controlling the sequence of panels, and pianist contributed with reactions.

So, how does one go about watching? I watched both the voice actors and the graphic novel. As different sound effects were used, I’d look at the woman making them. I usually wouldn’t look at the woman controlling the panels or the pianist unless something shocking was said in the dialogue. When all three voice actors made a reactionary face, usually the other performers would as well.

After the show, the cast and creator held an autograph session. I purchased books one and two in graphic novel and radio drama and got all of it signed. Book two is going to be performed at the same location in November, and I’m definitely looking forward to it. If you get the chance to see the show, I’d recommend it!