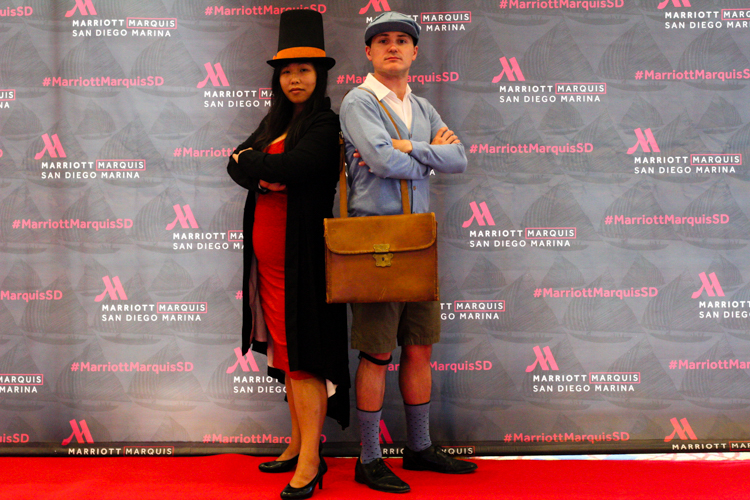 SDCC 2016 was a blast! I cosplayed as Luke Triton from Professor Layton for the first time while gem cosplayed Professor Layton herself. I also did a quick cosplay of a Team Valor Pokemon trainer as well as my Fix-It Felix, Jr. cosplay from last year. I saw a number of panels, met a lot of cool cosplayers, got some free books, partied, and did a whole lot more. I was also very exhausted 🙂 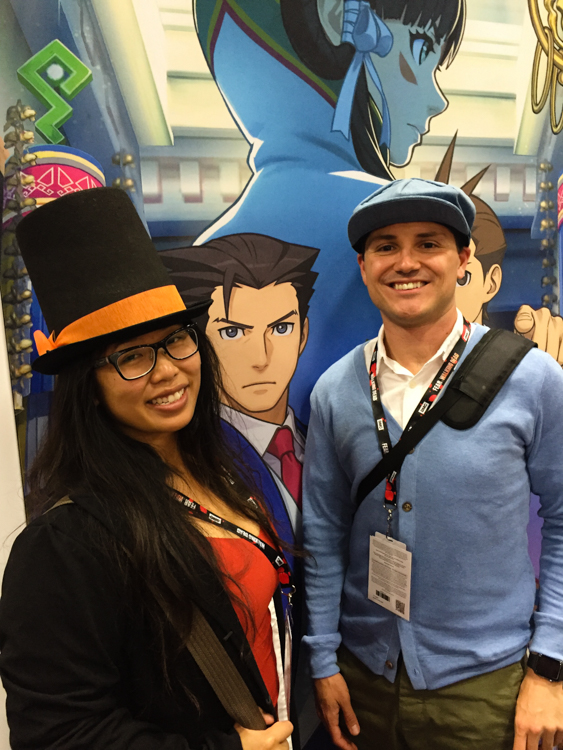 I was really happy with my Luke cosplay. gem and I stopped by the Capcom booth and took a photo with this picture of Phoenix Wright. There was a crossover Professor Layton and Phoenix Wright game, so we thought it was appropriate. I was hoping to run into a Phoenix Wright cosplayer, but it never happened. 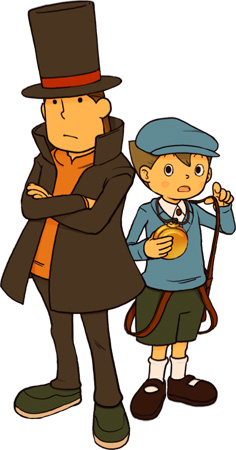 Here’s a promotional picture of Layton and Luke if you’re unfamiliar with them.

We stopped by the Behemoth booth like we do every year. One guy running the booth, Larry, recognized us from last year when gem asked if Hatty was going to be in attendance! He remembered that gem wrote a note and gave it to him to give to Hatty in 2015. He was awesome!

We went to a number of interesting panels starting with “Retellings and Remixes” with Marissa Meyer, Renee Ahdieh, Colleen Houck, Anna Todd, Jodi Meadows, and Colleen Oakes. gem’s a big fan of Marissa Meyer. Although I hadn’t read her works, they sounded interesting, and she was a great speaker. I’m looking forward to reading more of her work in the future. The panel focused on retelling fairy tales and classic novels in a reimagined way.

“Nedist TV: The Boundary-Pushers” featured Bryan Fuller, Michael Green, Steven Moffat, and Alicia Lutes discussing the new acceptance of genre TV with a focus on American Gods and Sherlock. They also went into tangents about accepting all kinds of peoples it definitely went anti-Trump at times.

“A World After Harry: The Changing Genre of YA Fantasy” featured Sarah J. Maas, Jessica Cluess, Gena Showalter, Thomas E. Sniegoski, Soman Chainani, and Tobie Easton discussing how young adult fiction has changed after Harry Potter. It was interesting to hear how authors set themselves apart from J.K. Rowling. 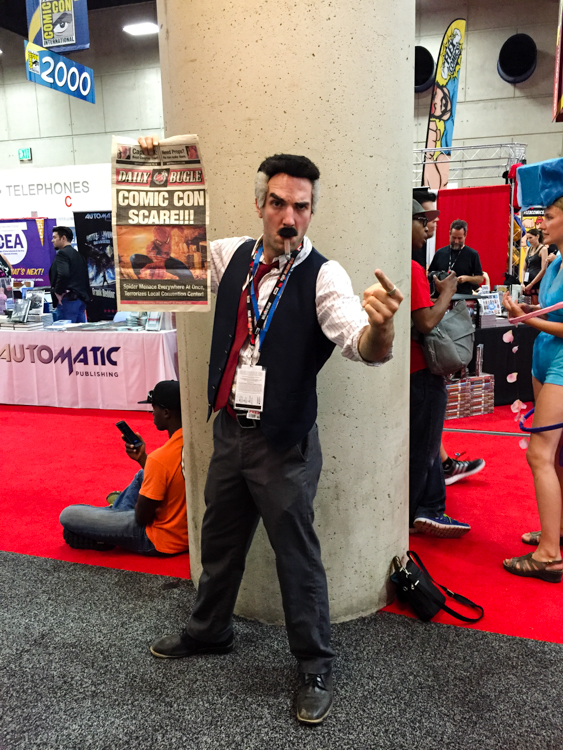 My favorite panel was “Cosplay as Storytelling” in which Adam Savage, Jay Justice, and Deborah Nadolman Landis discussed cosplay and how it’s a form of storytelling. Adam went into how cosplaying isn’t just wearing a moderne child costume, but it’s a type of performance. I definitely know what he means. Look at this awesome J. Jonah Jameson I met. He’s not just in a costume. He’s performing; he’s telling a story. And he’s great!

The last panel I attended was the “Spotlight on Marissa Meyer,” which was interesting. Unfortunately we were a bit late due to an autograph session, but it was still fun. 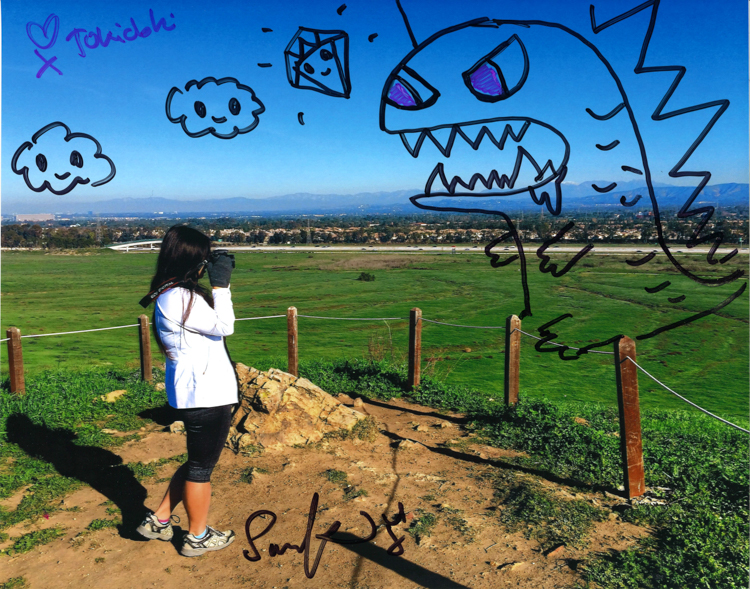 Did you hear about the new tokidoki x Peter Anargirou collaboration? I printed one of my photos and took it to Simone Legno’s autograph session. It’s fascinating how great artists and creative people of all types and collaborate, and I love collaborating with people in small ways. Having him draw on one of my photos was a cool way to collaborate with him, and since gem’s in the photo, she got to be in on it as well! Now it looks like gem is photographing the cute Kaiju!

I also got a copy of Heartless autographed by Marissa Meyer as well as Red Rising autographed by Pierce Brown. I came out of the con with a few other few other free books as well – An Ember in the Ashes by Sabaa Tahir, The Elfstones of Shannara by Terry Brooks, and Bombs Away: The Hot War by Harry Turtledove. I wasn’t a fan of the last book by Turtledove, but I’ll give this one a try. 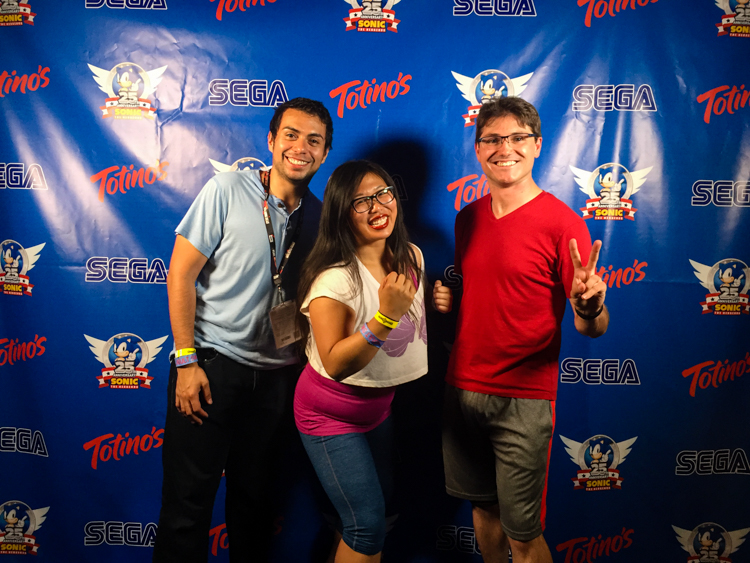 The three of us attended the Sonic the Hedgehog 25th Anniversary Party at the House of Blues, meeting two new friends and running into an old friend, Pat, as well. It was a ton of fun – a lot more than I expected. It was sponsored by Totino’s, so we got to eat some greasy snacks, but we also took shots and I had a few White Russians. I took a photo with a cool Sonic the Hedgehog cosplayer, we got some swag, and I talked a lot. There were games to be played there too, but I didn’t touch them honestly. At the end of the night, the staff recorded the audience yelling “Sega” to be used as the intro for the next Sonic game. After the party we went back to the hotel for more drinks. There was live music at the bar, and I did a little Balboa swing dancing. It turns out that I’m a decent dancer (to a drunk crowd of SDCC attendees). 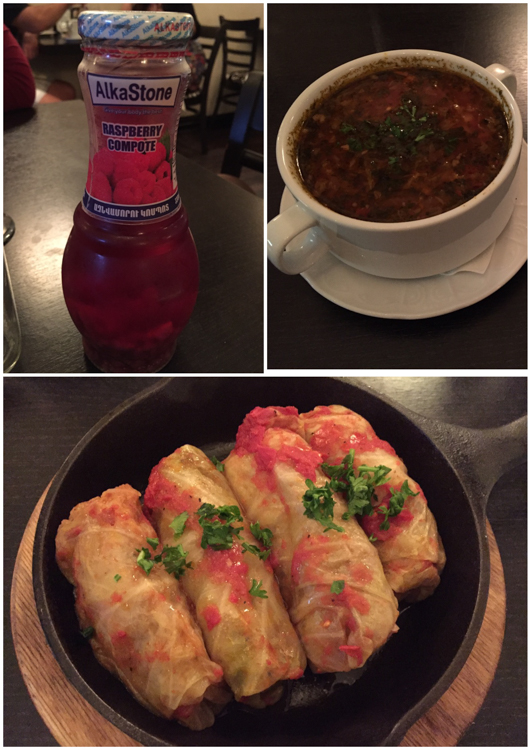 gem and I met our friend Mike for dinner at Pushkin Russian Restaurant. It was so delicious! I hadn’t seen Mike since New Year’s Eve, so it was good to see him. Afterward we checked out the Nerd HQ party, but it wasn’t that good honestly. 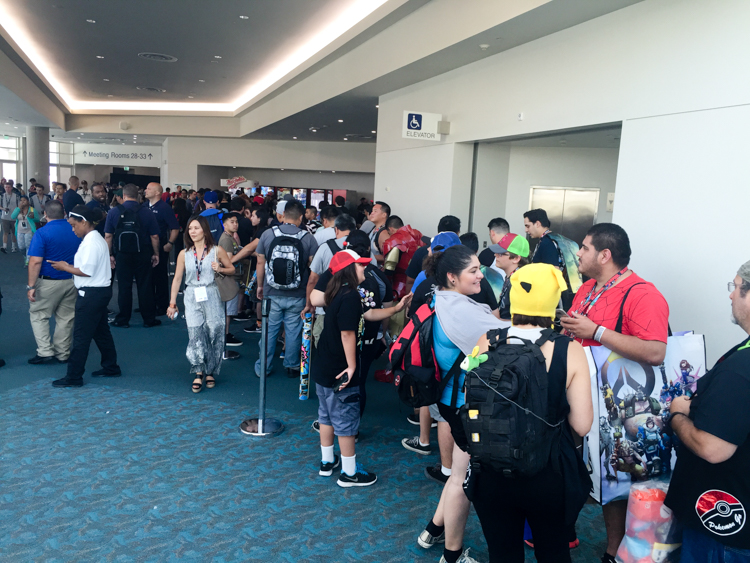 There was a Pokemon Go panel in Hall H, the largest hall at the convention. Previously, you’d need to line up over night to get into Hall H. This year, you could line up for wristbands, given out at 9:00 PM. We checked out the line around 8:30 PM, and it was huge. Absolutely huge. And then we found out from the guy working there and watching the line that the night before the line was that long, but he didn’t know if they got wristbands. He got off work at 1:00 AM, and the wristbands hadn’t reached that far back. Yeah, we decided to skip Hall H. However, there were rumors that Niantic would release something for Pokemon Go in the panel, so a ton of Pokemon Go fans congregated around Hall H or above it. Convention staff started yelling at people to leave. I’d like to add that they never once tried talking like normal, civil people, and they also made up lies to get us to leave. Not cool. What was cool was when people realized that if they line up for the Mrs. Field’s Cookies stand, they were no longer just loitering. Yep, that line pictures above was for cookies – totally not Pokemon Go. And by the way, nothing was released in the panel. 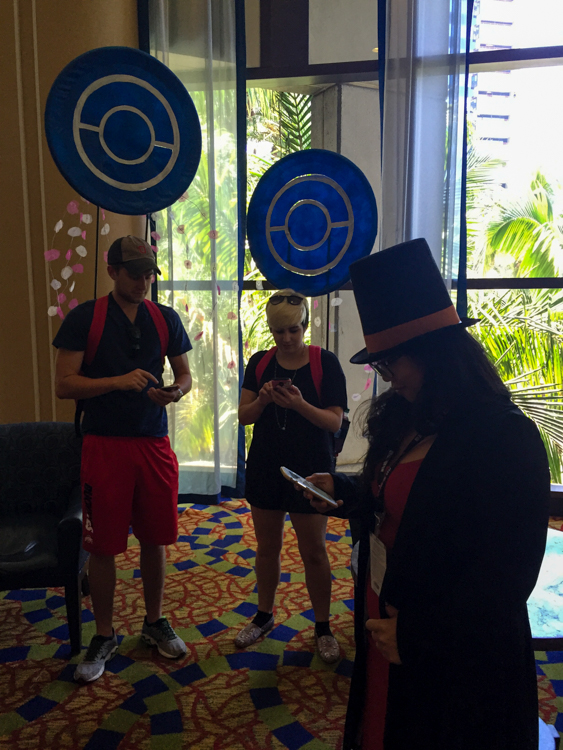 Pokemon Go was extremely popular. Here Professor Layton checks for Pokemon since there’re lures on the Pokestops near her. 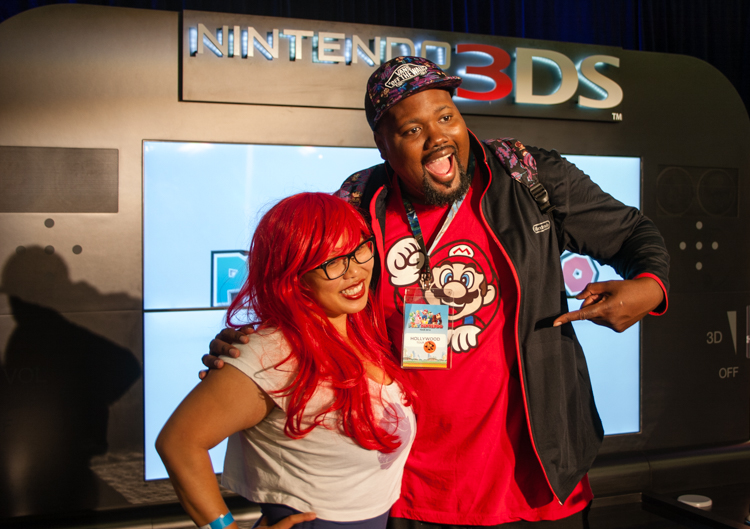 This guy working in the Nintendo Lounge loved gem’s Ariel and asked for a photo with her. Look happy they look! This guy was awesome. 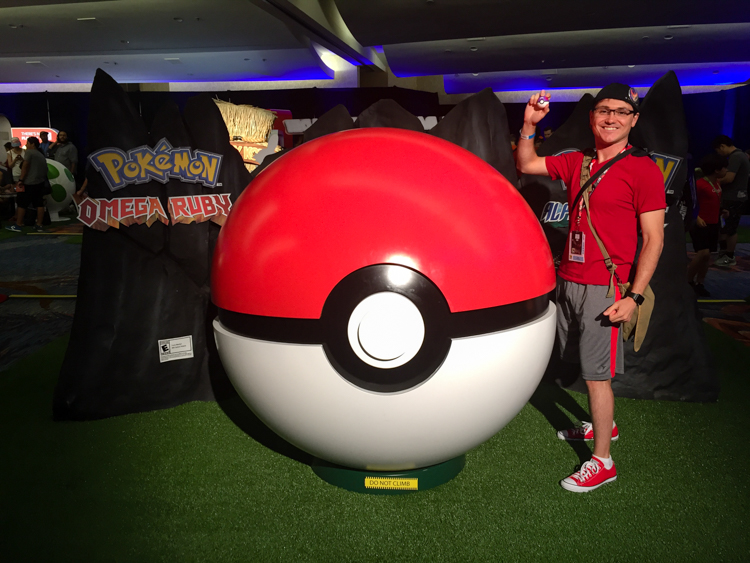 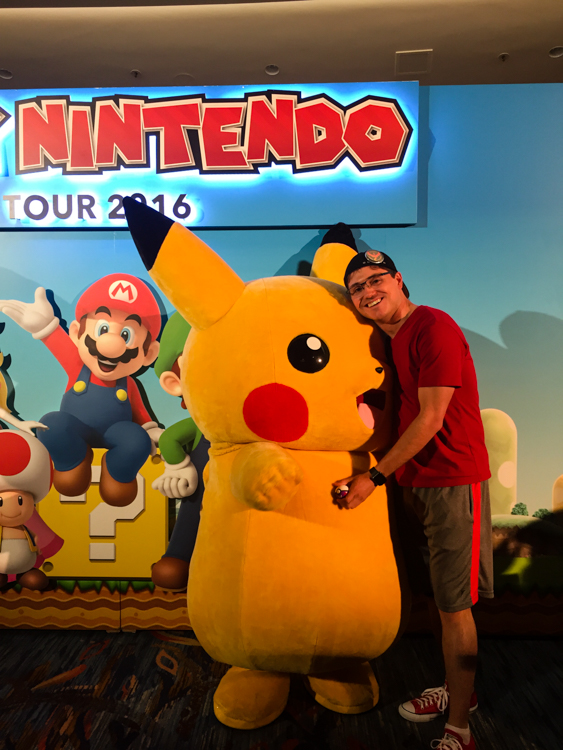 When meeting pikachu, you need to give him a big hug so that he knows you’re his friend. 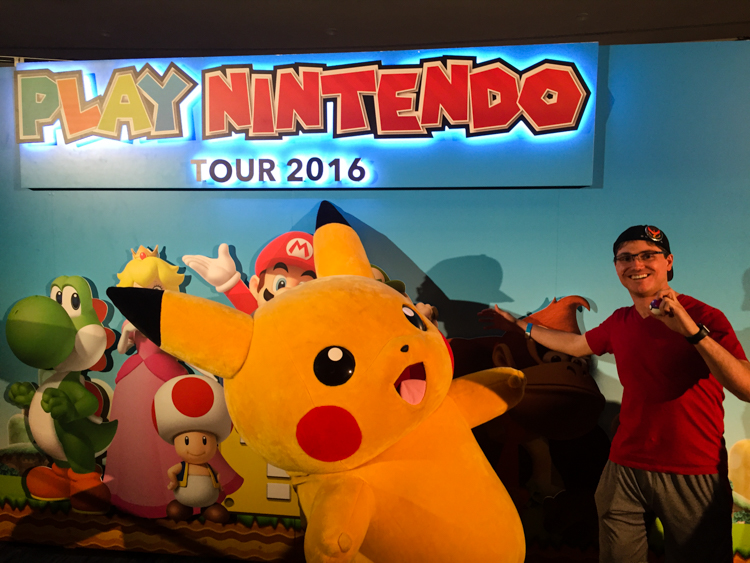 Once he’s been lulled into a false sense of security, you bust out a pokeball and catch him! 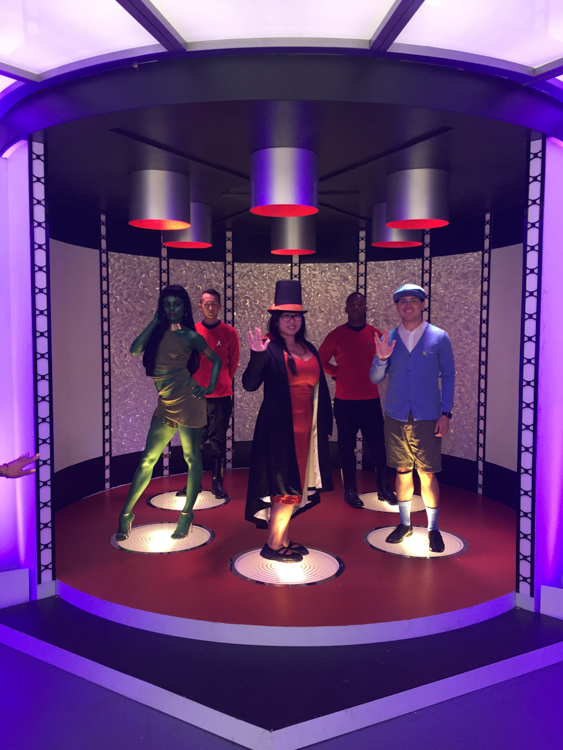 Star Trek was also very popular this year as it’s the 50th anniversary. MAC had a building designed to look like the saucer portion of the Enterprise while they showed off their Star Trek makeup. I didn’t care about the makeup, but we took the opportunity to stand on transporters as Layton and Luke! Plus, Nichelle Nichols, who played Uhura on Star Trek, was there. 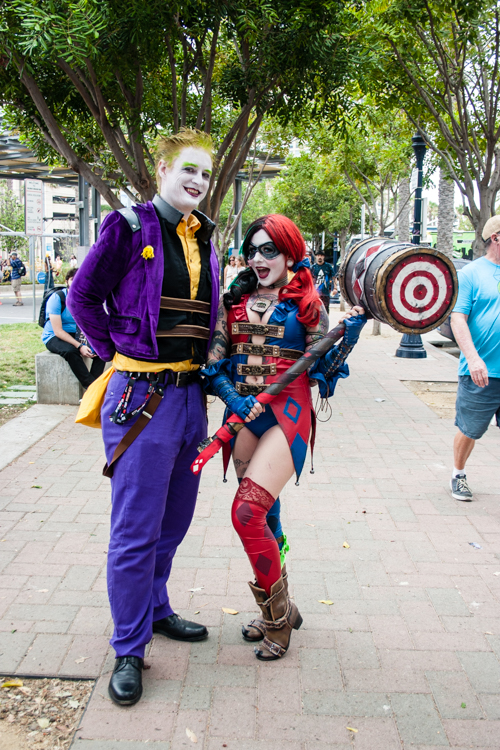 I asked these two cosplayers if I could take their photo because I thought they had great costumes. The Harley Quinn cosplayer noted that most people don’t even ask and said they’d be happy to pose. 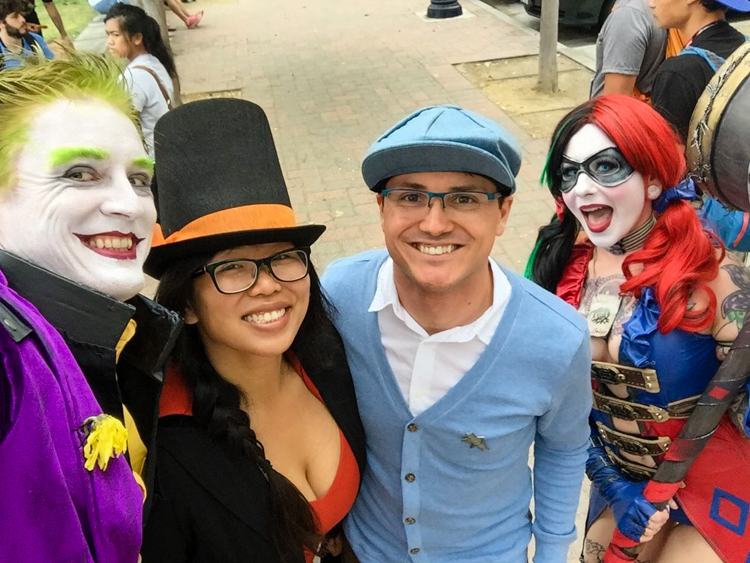 Professor Layton and the Curious Clowns

Actually, the Joker cosplayer recognized gem’s cosplay and asked us for a photo! How cool 🙂 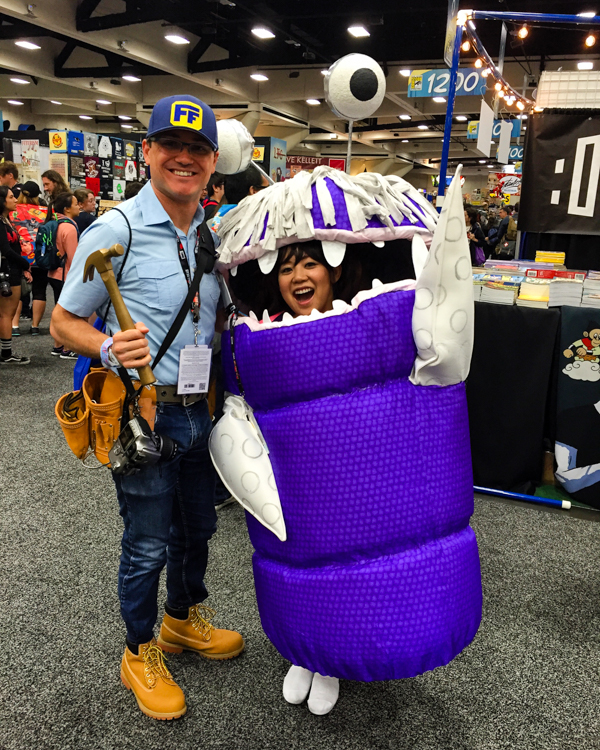 Here’s a shot of me in my Fix-It Felix, Jr. cosplay along with a Boo cosplay from Monster’s, Inc. How cute is that cosplay? 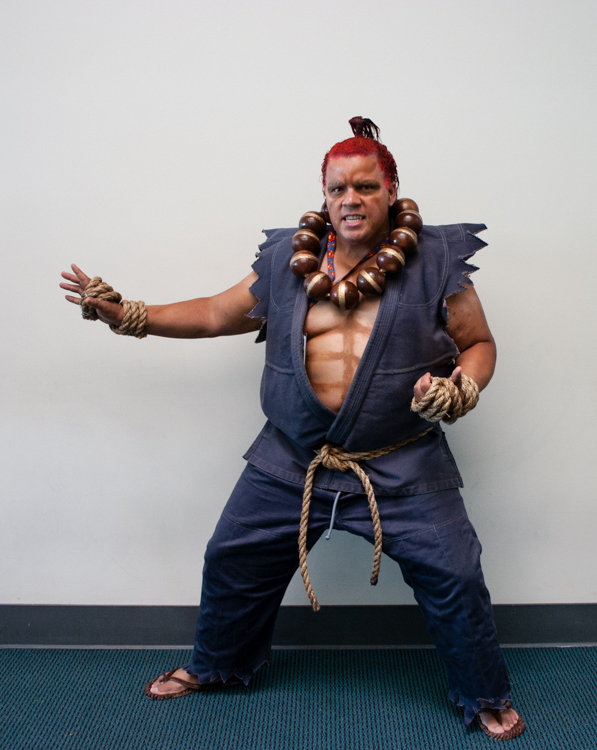 This Akuma cosplay is great too. The cosplayer was nice enough to find a good spot to take the photos. gem noted that you could sense his personality and mannerisms change as he got into character just like Adam Savage said cosplay often does. 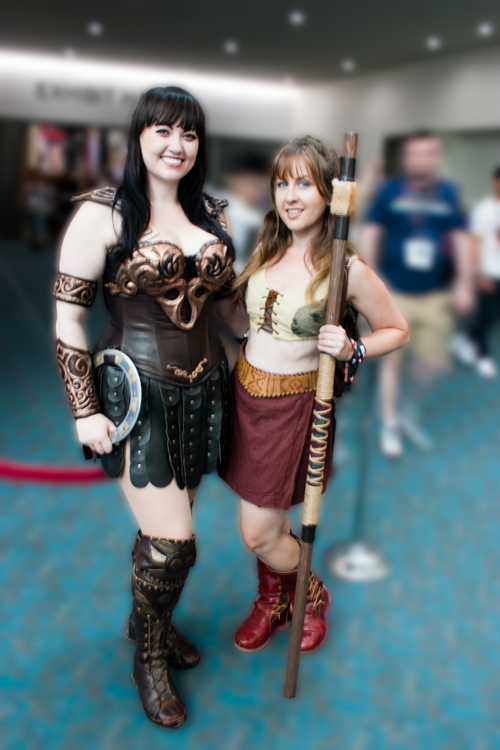 Last but certainly not least, this is Bernadette Bentley and Cathy Kutz as Xena and Gabrielle respectively. It was awesome to run into them and take their photo because I was already a fan. They were really nice!

My favorite podcast, My Brother, My Brother, and Me, recently had a entire episode sponsored by Totino’s. That’s hilarious all by itself, but the episode was pretty great. One fan wrote to the show discussing how he prefers to pan-fry his Pizza Rolls.

“A few years ago I brought home Pizza Rolls to discover my roommate had broken the toaster oven. At the time, we didn’t have a microwave, and I didn’t want to wait for the oven to preheat. My solution was to grab a frying pan and some extra virgin olive oil and fry my Totino’s Pizza Rolls! They came out great, and now that’s the only way I prepare my Pizza Rolls. I cannot think of another podcast more suited for this anecdote.”

I’d be crazy not to try it, right? Last Friday was Pizza Day as The Aquabats would say, so it was the perfect day to try it out. Thanks to gem and Anela for helping make the video and eat delicious Pizza Rolls with me!

And the results? gem and I both preferred pan-fried Pizza Rolls. I thought they were awesome! We were in agreement that baked were next and microwaved were the worst (but still totally worth eating). Anela preferred baked over pan-fried but agreed that they were both better than microwaved. Well, two out of three isn’t bad. Thank you, Totino’s, McElroy brothers, and mystery writer to the show!