When I wake up and remember bits of dreams, I like to jot them down in my phone. Here’s what I can make out. Each bullet point is a different dream.

The Coup de Comedy Festival 2015 was this weekend, hosted by UCI’s Improv Revolution – a four day festival celebrating all sorts of comedy. Wednesday opened with Improv Revolution and Live Nude People playing together, referring to themselves as Nude* Revolution. Great name, and great comedy.

It was followed by The Resistance. They were amazing last year, so I was really looking forward to them this year. The video at the top depicts a flashback scene they performed of a pirate’s curse. The Resistance improvises action movies. This one was about kids finding a skeleton with a map to a treasure, full of karate, the nerd winning the girl, and useless adults. I didn’t realize until that day that Derek Mears, who I had just seen with Dr. God, was performing with them. Awesome!

Here’s another scene near the end – a karate montage.

The night ended with Delicious Moments, a duo who switches characters rapidly, usually going back and forth between roles during a single conversation. It’s, uh, long-form, I suppose. They don’t really do scenes exactly. They just talk on stage about their show, and then things happen. It’s pretty funny.

Kindred Throats consists of Kevin Stafford and Tom Risenmay who play guitar, sing, and generally act hilarious. Unlike most of what I’d seen so far at the festival, Kindred Throats performed sketch rather than improv (although bits are of course improvised).

This was the only show gem could attend, and I’m glad she did. During one part of the show, Kindred Throats began talking about various historic seats in the theater, including the two seats in the front for lovers. One pointed out gem and me and while the other pointed out gem and the guy sitting on her other side. They kept amusingly confirming that they were looking at the same two people while obviously being in disagreement until settling on gem and the other guy.

Once they were singing directly to gem, I had to record it, and you can see the video above. Basically, they’d get to parts in the song where they’d talk about something the lovers would do, and then they’d abruptly stop and stare until they did it. God it was funny, and I think gem really enjoyed it too.

After the show, I watched Sparks to Fire, which was a bit stand-up, a bit improv, and… a man eating a cactus?

L.A. Beast was there. I hadn’t heard of him, but he’s a competitive eater who also eats strange things on YouTube for entertainment. I saw him eat a dozen raw eggs, including the shells, a whole, raw cactus, and three ghost peppers. He apologized to the women in the audience, noting that his male fan base is much larger than his female fan base.

After the show was Stand-Up on the Spot with Jeremiah Watkins, but I skipped it. I did, however, see Kevin and Tom from Kindred Throats outside getting ready to leave. gem was on her way back to UCI, hoping to bring them homemade cookies. After telling them about the cookies, they agreed to stay and wait, so I had a chance to talk to them for a bit.

They really were in disagreement over who to pick. One wanted to pick gem and me and realized we were there together, while the other wanted to choose gem and the other guy because the other guy was using his phone to record the entire time. They said sometimes they choose people who are obviously together, sometimes they choose obvious strangers, and once they just chose two guys who were clearly just friends. 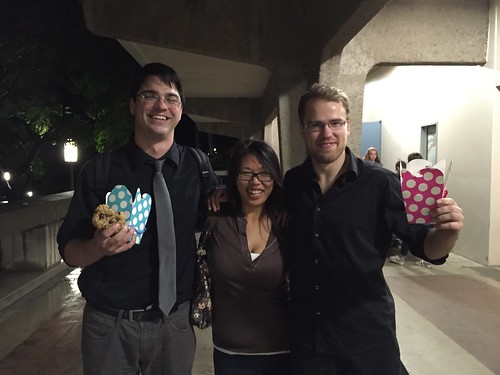 I didn’t attend Friday at all. I missed some Open Mic, Red Door & Triumph, The Mechanicals, OBGY-Not Sketch Show, and Stand-Up with Zoe Rose Moacanin.

Saturday was the last day (and a bit annoying due to breaks). It began with Second City’s Really Awesome Improv Show followed by a two hour break. 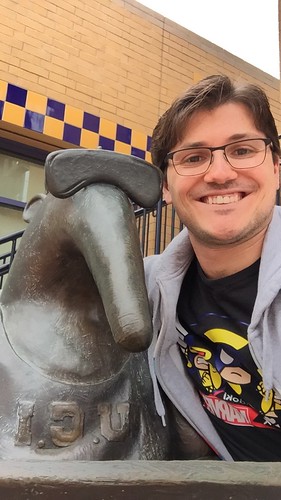 I spent that break taking a picture with Peter the Anteater. 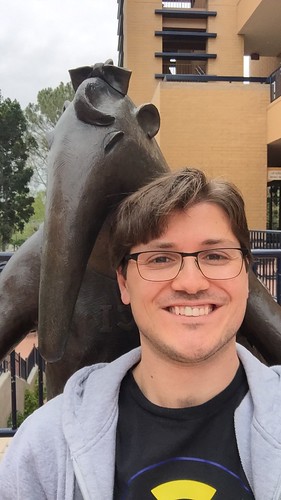 And I also read Scott Pilgrim and messed around on my phone. 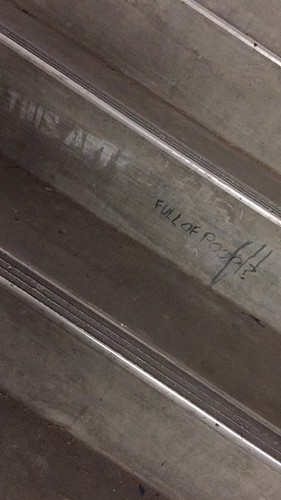 I also found this graffiti. THIS ART: FULL OF POOP?

After the break was Doctor Who Live! – an improvised episode of Doctor Who. I don’t really care for Doctor Who, but it was still entertaining. After another two hour break during which I read more, I watched the Count Gumdrop improv performance, which was pretty funny. The night ended with Impro Theatre’s Chekhov UnScripted and Revolutionary Comedy Award honoring Keegan-Michael Key, but I bailed on those to head to my friend’s place for a game night.

It was a laugh-filled weekend! 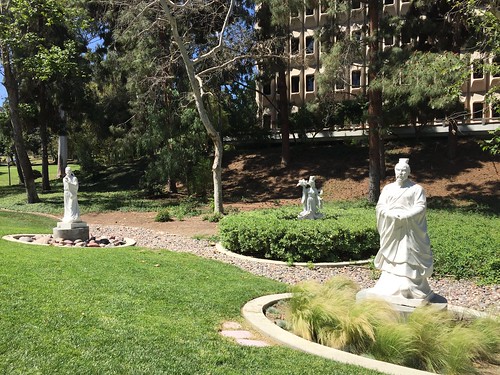 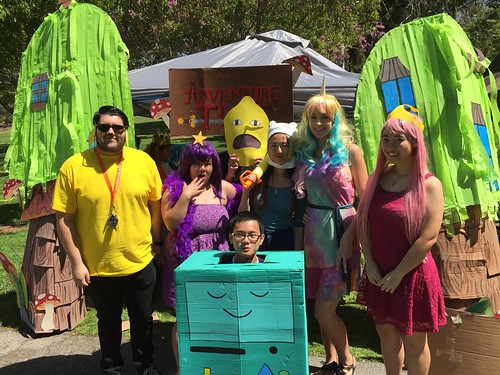 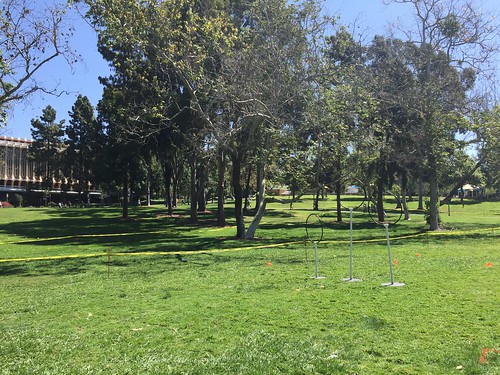 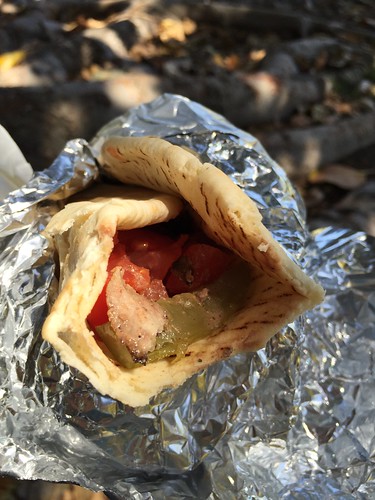 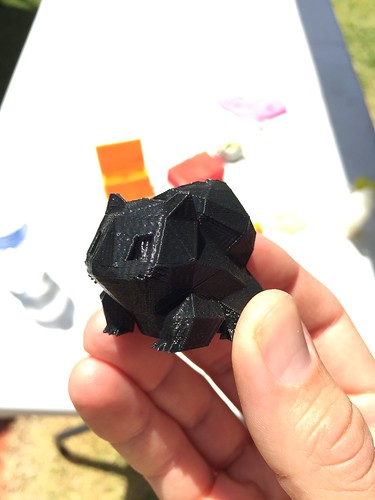 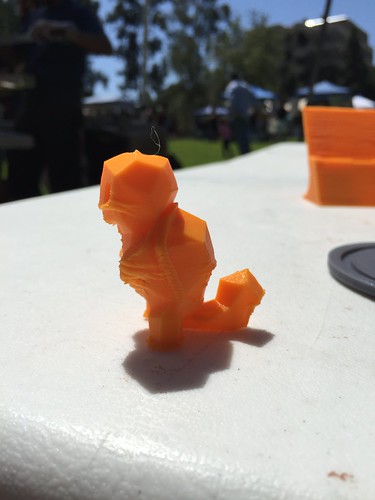 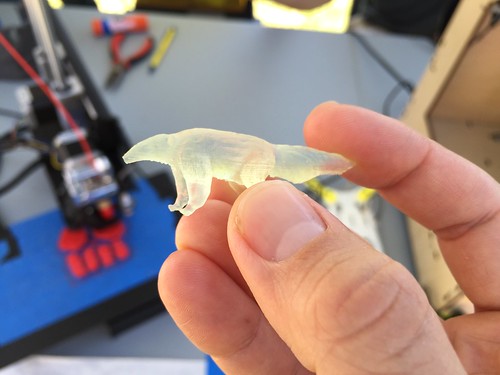 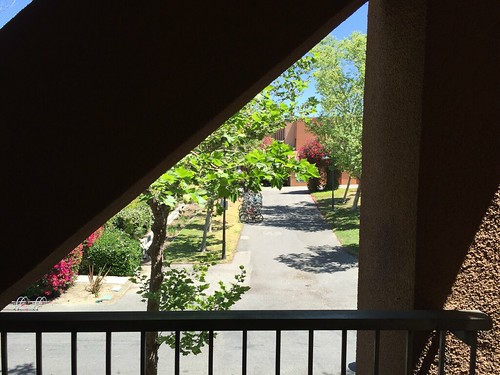 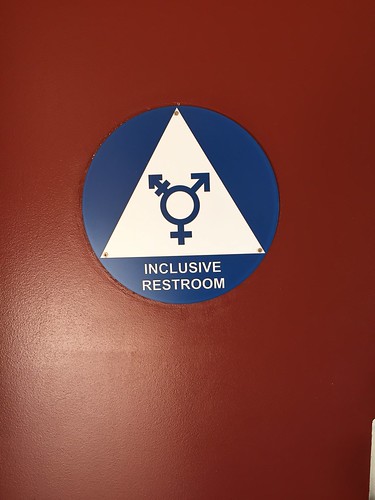 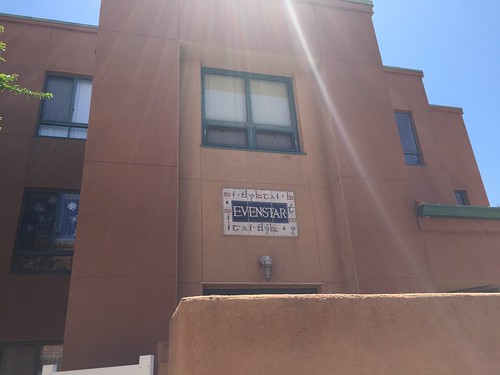 Today was Wayzgoose! I always really enjoy returning to UCI for Wayzgoose. It might be more fun now that I’ve graduated because there’s a novelty to looking around. There are campus tours, booths for all the organizations, performances, a car show, and in past years a small medieval showing (although I didn’t see any this year). While not part of the festivities, there are usually a lot of dogs on campus, which is a plus to me. 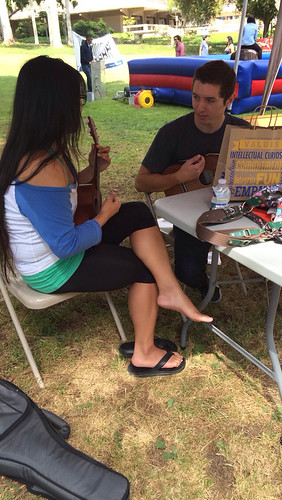 One booth didn’t seem to be setup yet, but it did have a guy playing his ukulele! gem joined him, and they played together for a little bit, teaching each other.

I had some spam musubi, lumpia, and chicken kabobs, which were all delicious. I was going to get a shawarma from the Muslim Student Union like I do every year, but I wasn’t hungry enough today. We also checked out the cars at the car show. I like looking at the Model As the best. 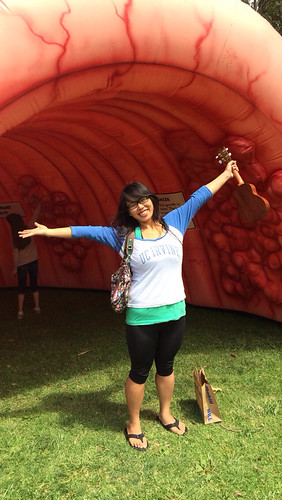 The medical center had a giant inflatable colon. In this photo, gem is poop.

We also ran into some Improv Revolution members inside the colon and discussed improv. It was fun! 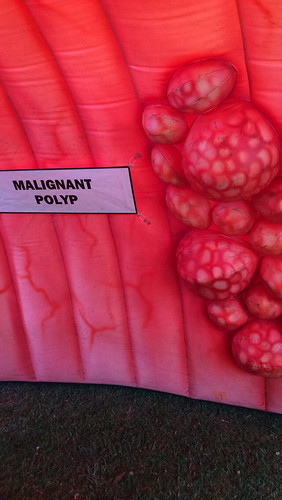 I’m ready to begin the operation! This reminds of me of Trauma Center: Under the Knife. 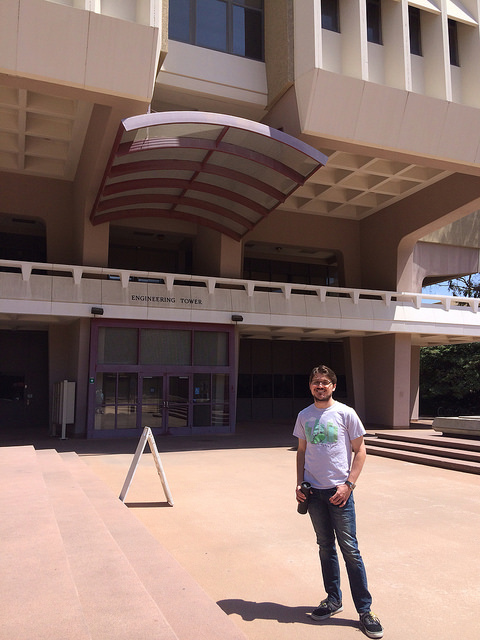 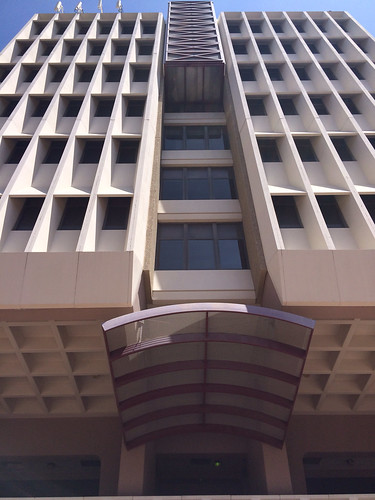 And I took one too. 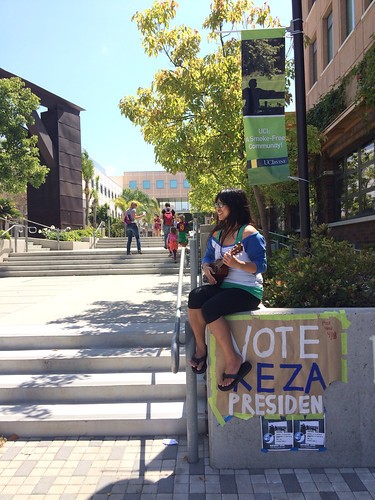 gem stopped to play ukulele near Engineering Gateway too.

I still think UCI’s a really beautiful school. I can’t help but think, “I’d like to go to school here,” even though I already did. Tommy likes getting cozy under his USC blanket! This is my aunt and uncle’s dog. I went to their house for Thanksgiving where I had a turkey dinner, watched The Internship and The Hunger Games, and chatted with family. It was a very nice evening.

Apparently Tommy doesn’t like to get cold. When he gets on the couch, he likes to be covered by the blanket – and I mean covered. He usually prefers his head to be covered too, but sometimes he’ll push his head out later, presumably because he gets hot. You know what? I do this too when it gets cold.

I also found out that my cousin is considering going to UCI. That’d be pretty cool in my opinion, but I’m not sure he’d really care that I’d be in the area.

Hopefully everyone else had a happy Thanksgiving (or a good Thursday for my friends outside the US).