My roommates started a fourth edition Dungeons and Dragons campaign last night! I can’t wait to join in next week. I’m really looking forward to playing. It even has a light inside it!

I had been looking forward to playing Ratchet & Clank Future: Tools of Destruction when I obtained a PS3, and recently I finally had the opportunity to try it. It feels like a classic 3D platformer (can we call something from the 5th generation ‘classic’ yet?) but with polish that the genre doesn’t normally receive today. It has a lot of running around, jumping, and shooting. It also has little need for precise aiming or hiding it under cover, keeping the classic, action feel. As you kill enemies and blow up boxes, gears will appear on the ground that you can collect to power up. I’ve only played the first level and a little of the second, but the first level was just gorgeous. The graphics are great with a fantastic futuristic city. There were lots of colors with tall buildings and flying vehicles stuck in traffic high in the air. The character designs are cute and cartoony. Ratchet looks like a bipedal cat, Clank is a little, silver robot, and the enemies I’ve fought so far have been little slime/worm things inside mech suits. I’m looking forward to playing more of this! 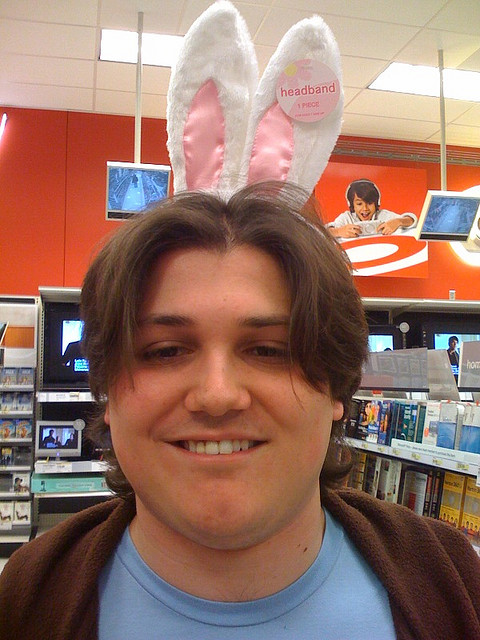 I don’t need you to get my bunny band!

The gameplay of Unreal Tournament feels just like it always does! It has all the weapons I love and the fast pace I came to know in the first Unreal Tournament. However, it now has an odd plot. The plot should be simply that Liandri Corporation is having a tournament. In UT3, some aliens attack a planet on which the main character lives, and he gets hurt. After he heals up, he wants revenge. There’s a bit more to it than that already, and I’ve only played one level of the campaign. There was a substantial amount of cut scenes already, but they looked good besides the faces, which looked very undetailed.
After he wakes up, he finds himself in what looks to be a monastery of some sort, and it appears that it belongs to people he and his friends are working for as mercenaries. The main character’s sister wants to make sure he’s ready for battle, so she decides to have a one-on-one match with him with rocket launchers (although when the match actually starts, you do not start with the rocket launcher, and other weapons are available). He question the safety of this, and she points out that respawners are used on the battlefield. Although the main character seems familiar with respawners, he’s surprised they’re used in the field. She says they’re portable units.

Of course I’m familiar with the concept of respawning, but I’d really prefer it if the characters were not.
Oh! I forgot to mention that the main character is Marcus Fenix from Gears of War. His armor’s a little different, but it’s basically him with a different voice actor. The aliens look like Locust also. I’m glad they’re proud of their new Gears franchise, but it should be kept out of Unreal Tournament. Everyone has the bulky, thick look of characters in Gears of War. Their armor has that same look as well.
Most dissapointingly, the buildings have the ugly bulk too. I played CTF on Facing Worlds, and the buildings just seem needlessly thick. I realize that previous incarnations of UT had altered the map to have much “thicker” looking towers, but those were also different, thicker towers. This map is a recreation of the original. It looks like the original except extra bulky. I also feel like they overuse textures on the buildings, especially the walls. Not every wall needs a little monitor or some flashing lights. People loved this map for a reason! Epic really didn’t need to change it. The towers also seem to have an Asian theme now, with some sort of futuristic paper lanterns hanging on them.
I’ve done a lot of complaining about things, but that’s because the core game feels just like every previous Unreal Tournament game – pretty awesome. I think I just prefer the clean, classic Unreal Tournament over any of the sequels. In fact, what I didn’t like about 2k4 was that it felt clunkier and bulkier. Here’s hoping for an Unreal Tournament 3 Lite Edition.