Last week was Improv Revolution‘s Coup de Comedy Festival 2014. There were a ton of hilarious events. While not everything was my cup of tea, the majority was great fun, and some groups were simply amazing.

The festival began on Wednesday, May 7 with the Improv Revolution / Live Nude People joint show. As a long time LNP fan, this was actually the show about which I was most excited. I particularly like their dance party game in which everyone on stage dances until the music stops. At that point, everyone freezes, someone touches the persons they want to see stay, and then everyone clears. After a short scene, it repeats.

After the opening show was the Revolutionary Comedy Awards honors Tony Hale. While waiting in line, we were allowed to put questions on post-it notes for Tony Hale to answer. gem wrote a particularly funny one, but you’ll have to ask her what it said. The event itself opened with a stand-up act, Sky & Nancy Collins. 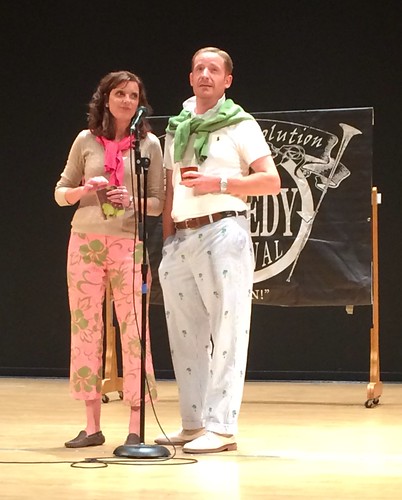 This was one of my favorite sets from the entire festival. Sky & Nancy Collins present themselves as a wealthy married couple from the gated community Rancho Pico de Gallo in Orange County. I suppose you have to understand some of the Orange County stereotypes, but luckily I do. “We’re married to each other. I guess that’s okay,” said Sky Collins. Mentioning right off the bat that they’re friends said they were funny, prompting them to try stand-up, they nonchalantly talk about their normal life in Orange County, with their disconnect from the non-wealthy making for many hilarious moments. Sky & Nancy Collins are actually Marc Evan Jackson and Carrie Clifford. 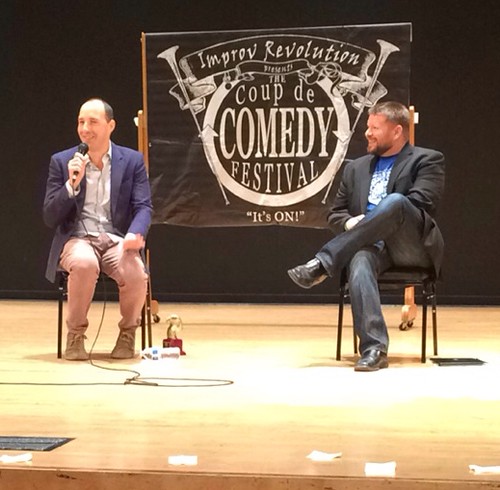 Tony Hale was funny even though he wasn’t performing. He discussed his life, both leading to his role as Buster Bluth on Arrested Development and after. He seemed very down-to-Earth and gave a lot of life advice. He specifically mentioned that a lot of people seem to be constantly looking ahead to their next gig or stage of life, and while it’s good to have goals, he reminded us to be happy in the present. “You have value exactly where you are now.”

The second day started with Awesome Sketch Presentation with Adult Babies & Humble Bees, a sketch show with performers (mostly?) from iRev. After that came Red Door. I remember thinking Red Door was very funny, but now I can’t seem to remember specifics, which is too bad. Next up was Octavarius, an improv team traveling from the future to keep history on the correct path by performing improv.

Following that was The Resistance from ComedySportz. Wow. They were amazing. The Resistance improvises action / sci-fi / horror movies on stage. Rolling around on mats? Gunshots? Monsters? Torture? Fight scenes? Fight scenes with strobe lights? Heck yes, the Resistance had all of these things. It was, of course, funny as well, but I actually got into the story too.

The night ended with Sparks to Fire. They performed short stand-up sets followed by improv based on those sets.

Friday began with the ClownMa dell’Arte show. This was the second clown show I’d seen, and I guess I must really enjoy them. It was a hilarious show that included one clown eating the flowers from stems before trying to get her heart’s desire to eat the petals she spit from her mouth. I also essentially had a clown grind on me. No, it wasn’t one of the cute ones.

Later I saw another awesome ComedySportz show – U-Sical: The Improvised Musical About You! They listened to some audience members talk about interesting events in their lives, including the man who knocked himself out by riding a bike into a tree, the woman who got to feed a bear cub (oh man, I love bears), and Josh Nicols’ story of how he delivered a copier to a hospital and got attacked by patients. It’s probably no surprise that we got to see Josh’s story, because that did sound like the funniest one. U-Sical did a great job, and I’d love to see them again.

After U-Sical, we got to see Carrie Clifford (of Sky & Nancy Collins) again in a two-person improv show, Razowsky & Clifford. After that was Stand-Up on the Spot: The Improvised Stand Up Show with Jeremiah Watkins. It involved a variety of stand-up comedians performing sets on-the-fly based on audience suggestions. I didn’t find all of them funny, but some certainly were. The night ended with an Improv Jam. I watched, but I didn’t participate.

I started the day watching some Spectacles Improv Engine – specifically Ghostlight and FlySpace. Both are some of my favorite teams, with FlySpace performing more traditional scenes and Ghostlight always performing hilariously spooky scenes. I really like Ghostlight, and it’s surprising how often I get into the stories they conceive.

Following Spectacles was the Epic Open Mic, in which people tried their hands at stand-up. I think they were all students or recent graduates.

Next was another highlight of the festival – Twilight Zone UnScripted by Impro Theatre. It really felt like I was watching a couple hours of Twilight Zone episodes! I was pretty blown away. For each “episode,” the group would take a simple suggestion from the audience on which to base their performance. I saw a man haunted by vivid war flashbacks, a long line of mayors put in place by aliens, a woman preyed upon by memories of a fire in her childhood and scared of s’mores, and more. Impro Theatre also performing in other styles as well. I’d particularly love to see one of their westerns!

There were two more shows. First, there was The 313, who were very funny. The festival ended with Delicious Moments, a two-man improv team. I don’t know if it was just for this show or if they always do it, but their gimmick was that they each performed multiple roles at the same time and would run back and forth between them. They’d even interrupt the show at times to recap who was on stage under the guise of reminding themselves (but also, most likely, for comedic effect). It was very interesting and amusing. I like it when improv comedians/teams have a gimmick that make them stand out a bit.

And that was the 2014 Coup de Comedy Festival! There were so many talented people performing. It was fun to see Tony Hale, and of course I already know iRev, LNP, and Spectacles. I would totally love to see Sky & Nancy Collins, The Resistance, ClownMa dell’Arte, U-Sical, or Impro Theatre again. Hopefully I’ll have that opportunity in the future!