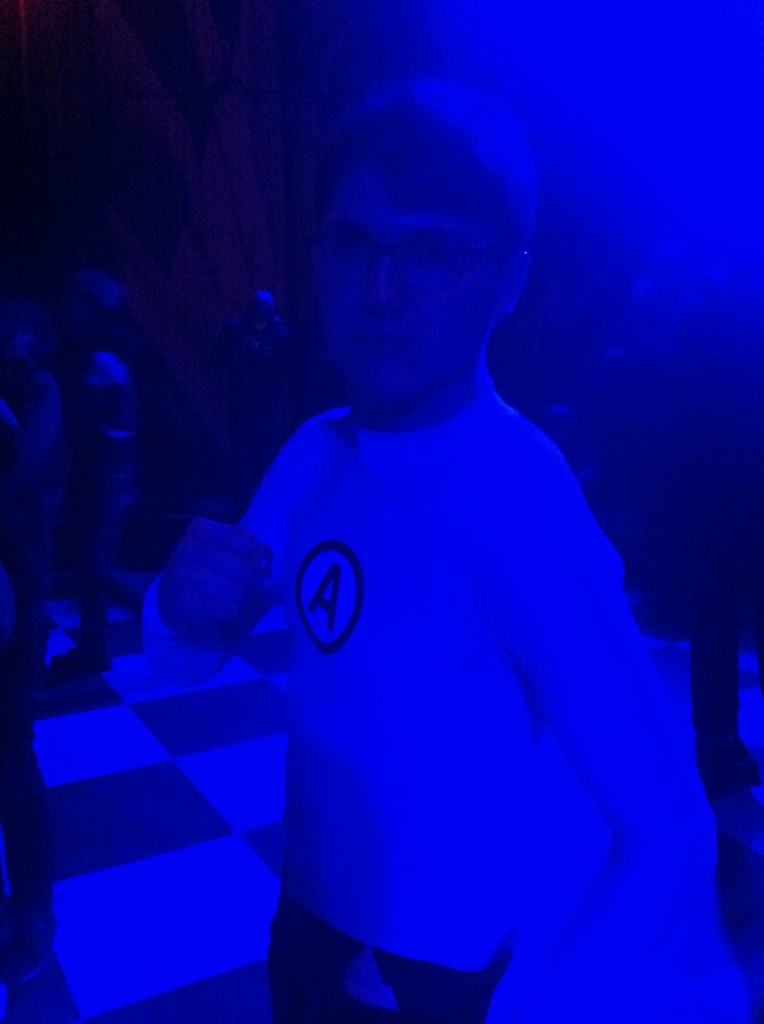 After a week of eating the lunches from the Aquabats’ Pizza Day, I was ready for Saturday’s concert at the Fonda Theatre in Los Angeles! Emily’s Army and Kepi Ghoulie were the opening bands, but of course I was there for the Aquabats.

You can’t make it out in the photos, but I’m wearing a blue rashguard and gem’s wearing a purple rashguard. I opted to leave my anti-negativity helmet and power belt in the car for ease of jumping around and getting slammed by people. There’s always a game of Duck, Duck, Goose going in the back before the bands start playing, and this show was no exception. It’s pretty cool seeing the same fans at every show. I particularly remember the guy who wears a cool Aquabats lab coat, who I believe said he goes by Skibz, as well as the young woman with kids who was then the pregnant woman in the pink rashguard and is now the woman with the young baby! Very cool. Kepi Ghoulie was really good; I enjoyed them a lot. Unfortunately, their bass player couldn’t make the show. They asked if anyone could play bass, and, well, Eagle “Bones” Falconhawk can! The band released a bunch of balloons and streamers into the audience and even threw presents into the crowd. gem got one; it was a toy car! We each also got a guitar pick from Kepi Ghoulie! Finally the Aquabats took the stage! Sorry for such a plain, boring photo, but the Aquabats threw beach balls into the crowd, and I got one. I didn’t take a picture of it until I got home. It’s probably about a foot in diameter. Pretty cool! Someone threw a red sweater onto the stage, so the Bat Commander decided to wear it before proceeding to sing Red Sweater.

After that song, the Aquabats were attacked by an evil crustacean! Don’t worry though. They managed to defeat him with the help of name-calling! Crash also recited a little poem that led into Super Rad. He also borrowed this cute hat from the girl standing to the left of me. I didn’t mention it, but it’s probably worth noting that I was right at the front and in the center. It was a sweet spot. I also got to enjoy chatting with security between sets.

Later the Aquabats got into another shorter fight but then found themselves hungry. Luckily, when they asked for a snack such as a granola bar, someone in the audience actually had one. Multiple granola bars, a Clif Bar, and a bag of Pepperidge Farms Milano Cookies were all thrown onto the stage. The Aquabats took a snack break, sang Snack the Night Away, a parody of Van Halen’s Dance the Night Away, and then… all licked the Clif Bar before throwing it into the audience for some “lucky” fan to eat. Near the end of the show, the Aquabats left but came back like they usually do. When they returned, they were in Christmas costumes! Ricky Fitness and the Bat Commander traded roles, letting Ricky sing while the Commander played the drums. Funny thing – it sure looked like the Bat Commander had four arms. I was hoping to get a photo, but I couldn’t capture it. And no, there was no trick with lighting. Evan Sinclair, the Aquabats Super Show music supervisor and stage manager was crouching behind him while reaching around and playing drums. Weird but funny.

Speaking of Evan Sinclair, he came out at the end to sing a little Hanukkah song before the Aquabats sang a Christmas song. I managed to grab a set list as well! In case you can’t see the photo, they played the following:

It was a fantastic set, and it started off so strong too! After the theme song, they went right to one of my favorite songs from Charge! and then Martian Girl (whoa whoa whoa whoa whoa).