In July 2019, I flew to Hawaii to meet Anela and visit Jordan and Christin. I hiked a lot, putting my recently healed foot to the test, ate a lot of foods, snorkeled, and more! But for some reason, I didn’t blog about it for a long time. This has been in my drafts in various levels of completion, but it’s time to publish!

I flew in Saturday, Anela and I both arriving at nearly the same time. Our AirBNB driver had never heard of milk tea or boba and didn’t think there was any in Hawaii. But he did suggest bubble tea. *facepalm*

We checked out our AirBNB in a touristy area of Waikiki. Anela instantly liked the stairs, and we stopped for a picture. We did a little shopping across the street for things we’d need before meeting up with Christin and Jordan.

They knew a ramen place they liked, so we went to Volcano Ramen in Yokocho Village for some delicious ramen. Is the ramen served in bowls or in upside-down volcanoes?

After dinner, it was time for tea because of course we needed tea. And look at the mustaches on the cups! We bought some drinks on the way back to our AirBNB, where we ended the night talking and hanging out.

Sunday was a day for pineapple shorts!

We started the day with tea from Starbucks near the bus stop at Jordan and Christin’s.

Our first adventure was Waimea Arboretum and Botanical Garden, which was beautiful!

After exploring on land, we decided to explore in the sea at Waimea Bay Beach park! We started by jumping off a big rock. I don’t know where the footage of that went. But then we went snorkeling!

Here’s a video with some clips of the snorkeling! I put a few together; the clips of me were filmed by Anela.

For dinner, we got some pizza at Spaghettini. Tasty!

There were a lot of lizards hanging around the pizza too 🙂

Monday started with Teapresso and Mitsuwa for breakfast with Anela!

After meeting up with Christin, we headed to Koko Head Crater for a hike to the top! Jordan worked during the days Monday-Friday, so it was just the three of us during the day.

The views were beautiful! I was pretty much soaked in sweat by the time we got to the top. It was quite the hike! Runkeeper said it was a 2.07 mile hike with 1334 ft total climb that took 4:31:33 and burned 1075. I say it it was gorgeous. There were definitely breaks on the hike to rest and to take a ton of photos.

Once we were at the top, Christin and I hiked a bit out to the ridge and back while Anela stayed at the top. It was a bit narrower, which wasn’t great for Anela’s lack of love for heights, but it wasn’t too crazy. The hike was a relief for me because I now knew that my foot could handle hiking. I had recently broken my foot, and while recovery was going nicely, I was a little worried.

This was also at the top, so we took some photos with it and on top of it!

Time to head back down!

After hiking back down, Jordan joined us and we went to OMG for Mexican food. After dinner, we had another Teapresso run before heading back to our AirBNB.

Tuesday started with a bath tub shoot for Christin and Anela. Nope, I didn’t get in the tub! I mostly zoned out and killed time while they did their shoot.

Christin, Anela, and I had lunch at Fatboy’s, but I was pretty focused on the chicken hanging out in the bushes.

No day is complete without tea it seems, so we after lunch we got tea at Bee & Tea.

Then we headed to Cash Beach in Lanikai to enjoy the water!

I also did some photographing of Anela and Christin, although I still haven’t edited them! I think we spent much more time with photos than swimming. I was a bit reluctant leave.

Walking back, we stopped for a photo in front of this beautiful gate!

After Jordan joined us, we walked around their neighborhood to check out the cool murals and spent some time in their apartment before going to dinner. We enjoying some food at Waikiki Brewing Co. Oh, and I caught a shiny Koffing that evening too!

The tide pools were next! They did require some hiking on a nice trail that felt like nothing compared to the previous day’s hike, and then we went off trail a bit and trekked down a hill.

Floating in the water chilling with fish!

After we eventually decided to leave and trek back up the hill, we moved on to Alan Davis Beach. We enjoyed the water as well as watched a group of guys try to get their huge, inflatable multi-person lounge thing into the water.

Time to jump into the Pacific! While the rock wasn’t huge, it was bigger than the video makes it seem.

Jordan joined us for dinner at what my notes say is “Ramen Village.” I’m fairly certain it was Shirokiya Japan Village Walk, a huge food court with many different shops, some small stages, and rows of gashapon machines. Anela certainly seemed happy with her ice cream. I’m really surprised I didn’t take photos of the building itself, but it seems I only have this one and a close up of my sushi.

Thursday started with doggos while we headed to our first real destination.

I found a mermaid! We visited the mermaid cave at Zablan Beach at Nānākuli Beach Park.

If I remember correctly, it was a little tricky to climb into and out of it. There wasn’t an easy way to do it without getting a little scraped up, but it was worth it! How cool was this place?! The walk was very rocky, and here’s where I learned what my foot didn’t enjoy – very uneven terrain. The hiking we did so far was relatively flat despite being an incline or decline. The very rocky terrain caused my ankle to move at weird angles and the pressure on my foot wasn’t great.

We tried to get to cat cafe after our mermaid adventure, but we didn’t make it back in time. Someone got hurt on our bus. I don’t remember the specifics, and maybe we didn’t fully know. I think he tripped getting on the bus and cut his leg. There was a decent amount of blood. I think there was a medical professional on the bus who helped him.

In the evening, we got some tea again, and Anela and I had some Korean food near our AirBNB. Before turning in, I bought and wrote some postcards!

Unicorn Cafe, which was a block or two from our AirBNB, had a cute sign that pulled us inside. Obviously we needed more tea this trip.

Fueled by tea, Anela and I visited Epic Aloha, a nearby selfie museum. I still haven’t gone through these and posted, but it’s on my list!

After enjoying Epic Aloha, Anela and I stopped at Coffee Shop 831 for a panini and tea! It was right across the street from our AirBNB, so it’s surprising it took us this long to have lunch there.

After lunch, we joined Christin and went on a quest to hike to the pink pillbox!

As usual, the view was great. The structures were pretty cool and, as you can see, had quite a bit of graffiti.

When the sun started to set, it was time to go. We hiked down and headed back toward home to join Jordan and grab some dinner at McDonald’s!

After a quick stop at Mitsuwa, likely for sushi but I don’t know for sure, Anela and I met up with Jordan and Christin and we headed to Aloha Stadium swapmeet.

I had to get this cologne, right? It’s not really possible for me to walk past it even though I don’t wear cologne. Plus, I got a couple magnets and such as small souvenirs.

Once we had our fill of shopping, we filled ourselves on BBQ at Dixie Grill, which was pretty tasty.

At the end of the day, Anela and I went back to our AirBNB and then spent the last evening in Waikiki.

Since we were wearing pineapple clothes, we stopped for photos with a giant pineapple statue! We explored some shops, and I specifically remember Anela doing some shopping in a Christmas ornament store. I might have spent a little time catching Ralts for community day too!

We also caught some hula dancers!

I had a nice morning on Sunday even if it was time to leave. After trying a few times to get a bagel breakfast sandwich from the place across the street, Coffee Shop 831, we managed to get some! This is a tasty avocado, egg, bacon, and cheese bagel sandwich! There wasn’t much time to do anything Sunday morning, so we talked a little and relaxed at the AirBNB before it was time to go.

By the time I got to the airport, it was time for lunch. The mushroom chicken hit the spot!

And then it was time for my bear that transforms into a neck pillow to join me for the flight home. Aloha, Hawaii!

Edit: And then Duncan picked me up from the airport! Alas, I didn’t take a photo. I’m sorry Duncan. 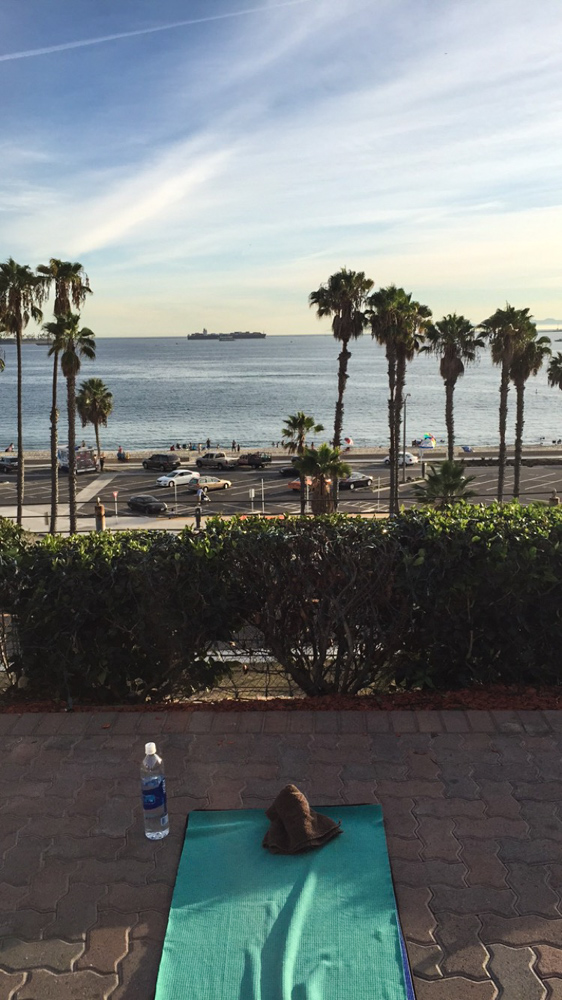 Saturday night was Hatha for Hunger, a Halloween gala hosted through Purple Yoga to raise money for hungry children. It was held at the Long Beach Museum of Art and kicked off with two yoga classes – an outdoor sunset vinyasa flow and an indoor gentle flow. 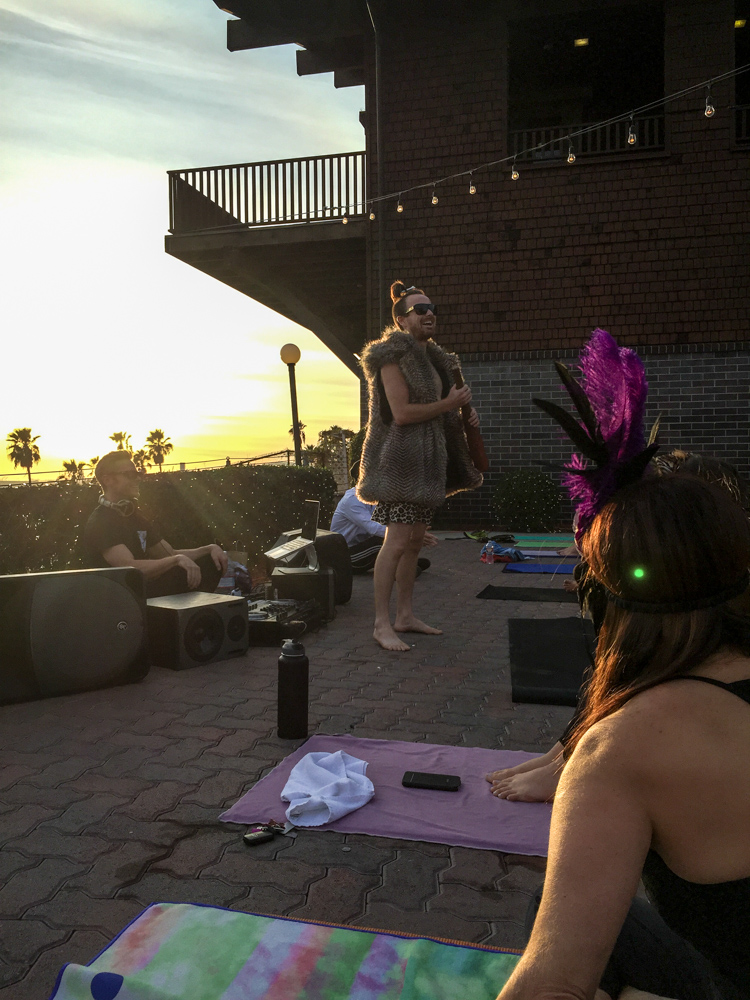 I chose the outdoor class and had my mat near the front so I could easily see the ocean. It was quite beautiful and hosted by two of my favorite instructors, Alex and Sean, as well as Scott, who I didn’t know. 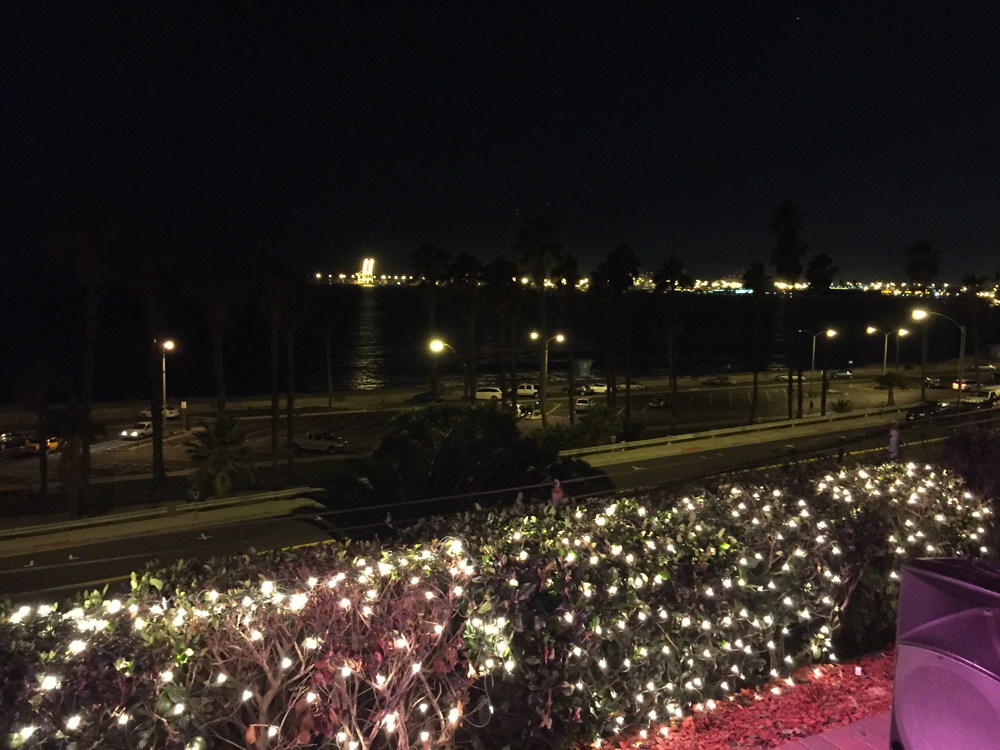 Here’s the view at the end. It was one of the most enjoyable classes I’ve even taken. 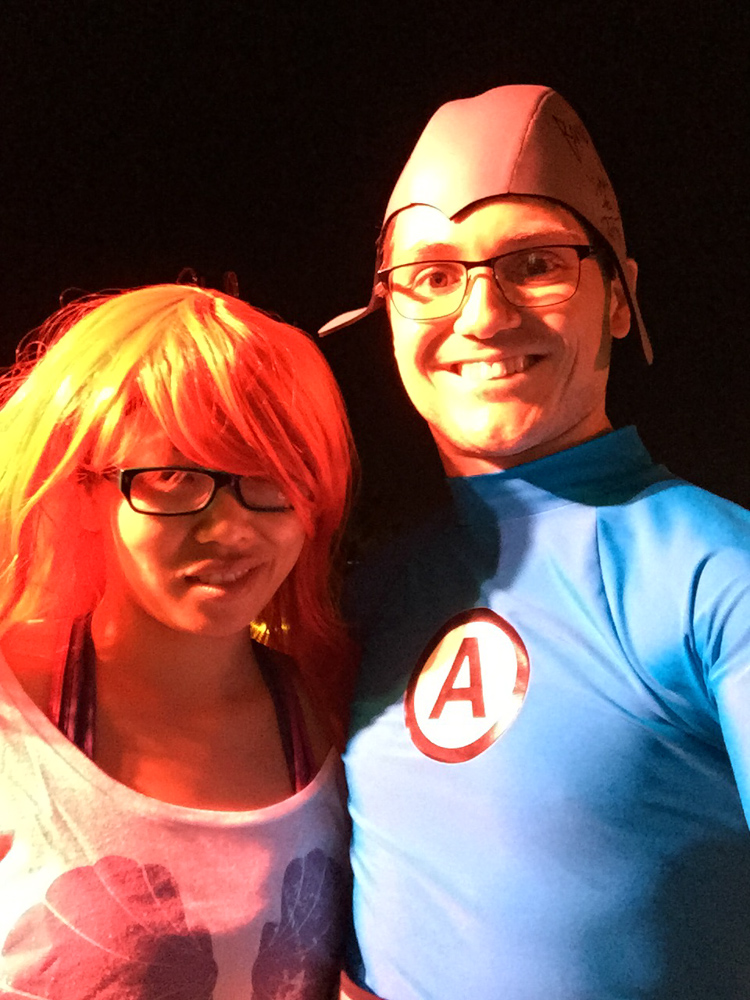 I took the easy path and wore my Aquabats costume. I didn’t put together a new costume, and this seemed like the easiest costume in which to do yoga. gem went as a mermaid! 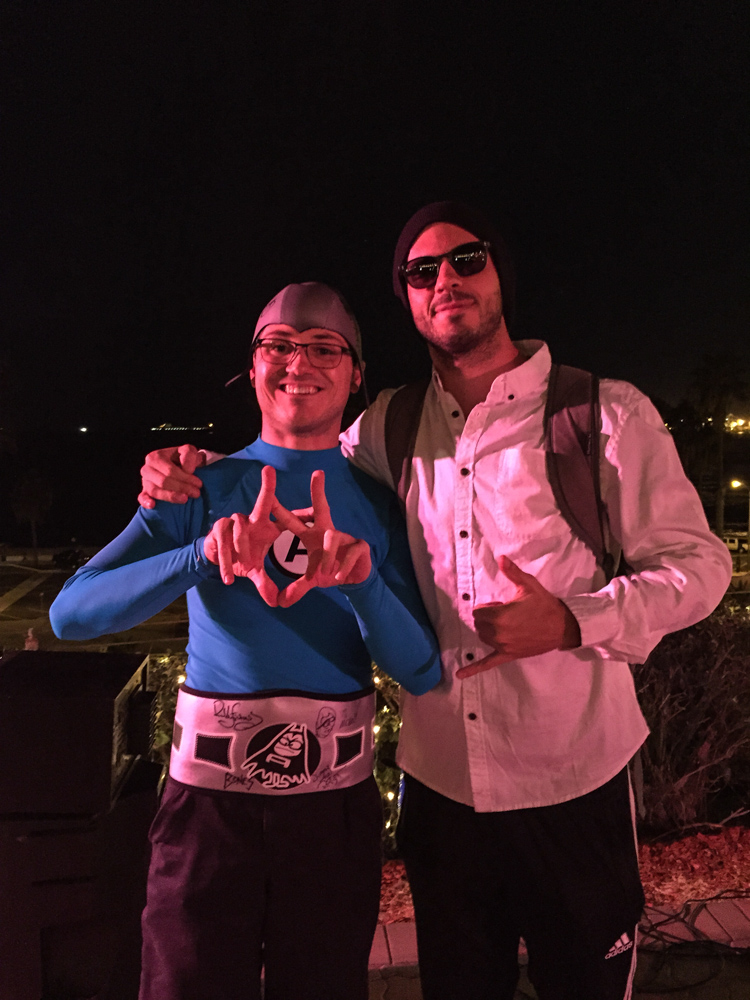 Here’s a photo of me and Alex after the class. 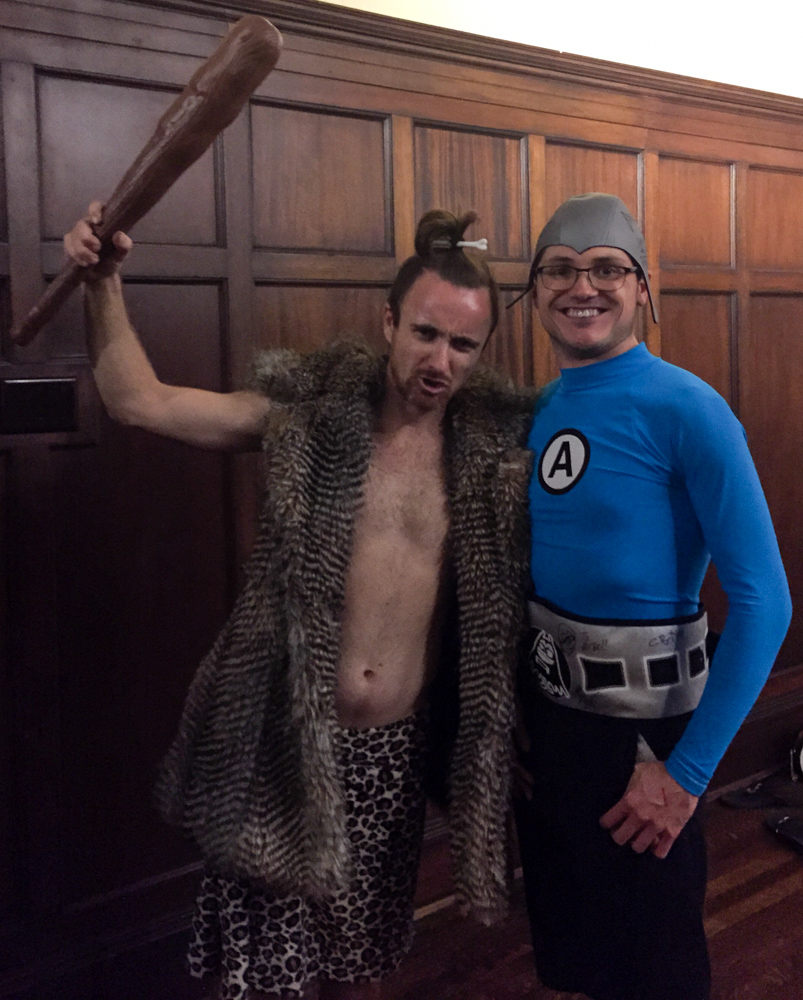 Sean didn’t club too many people during class. 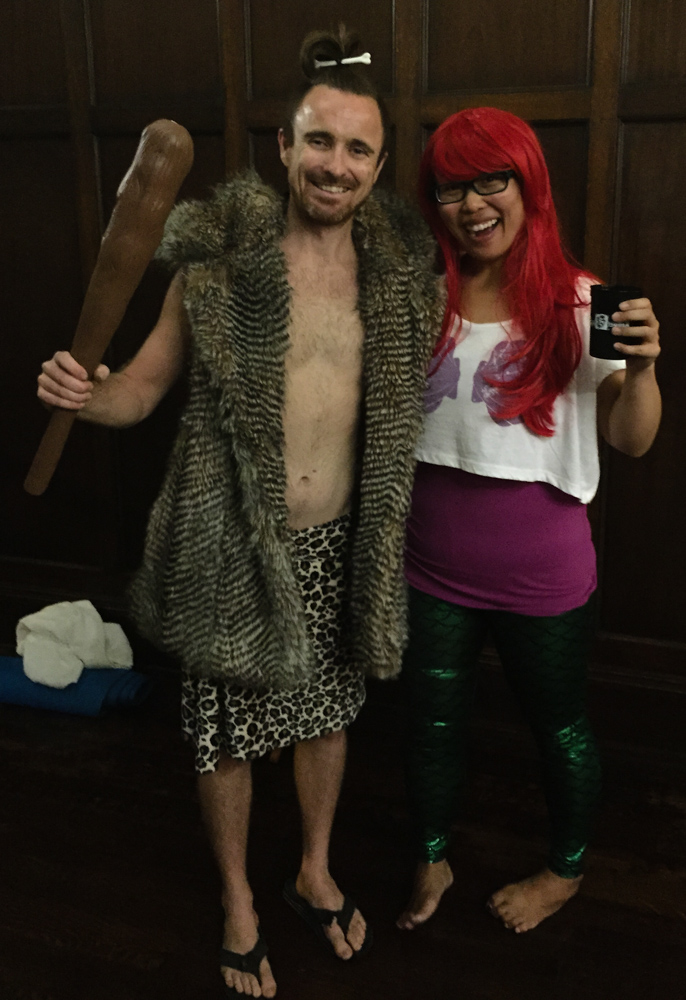 Here’s a great photo of Sean and gem. I’m glad I got one in which you can actually see gem’s costume. 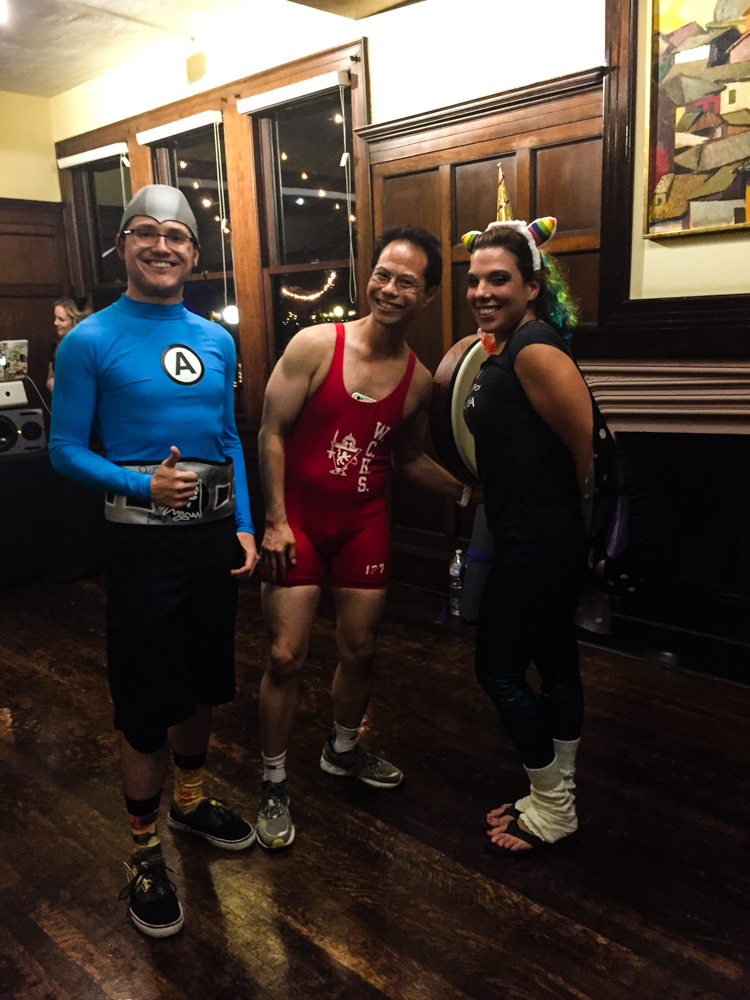 Here I am with Sterling the wrestler and Megan as a… okay, I think I can remember it all… mermaid, butterfly, unicorn… and Flavor Flav if you consider her clock purse (not shown).

Oh, and I wore the socks my grandmother gave me a few months ago because she confused me for someone else and thought I loved crazy socks. One has burgers and the other has fries. I think it goes well with the Aquabats costume. 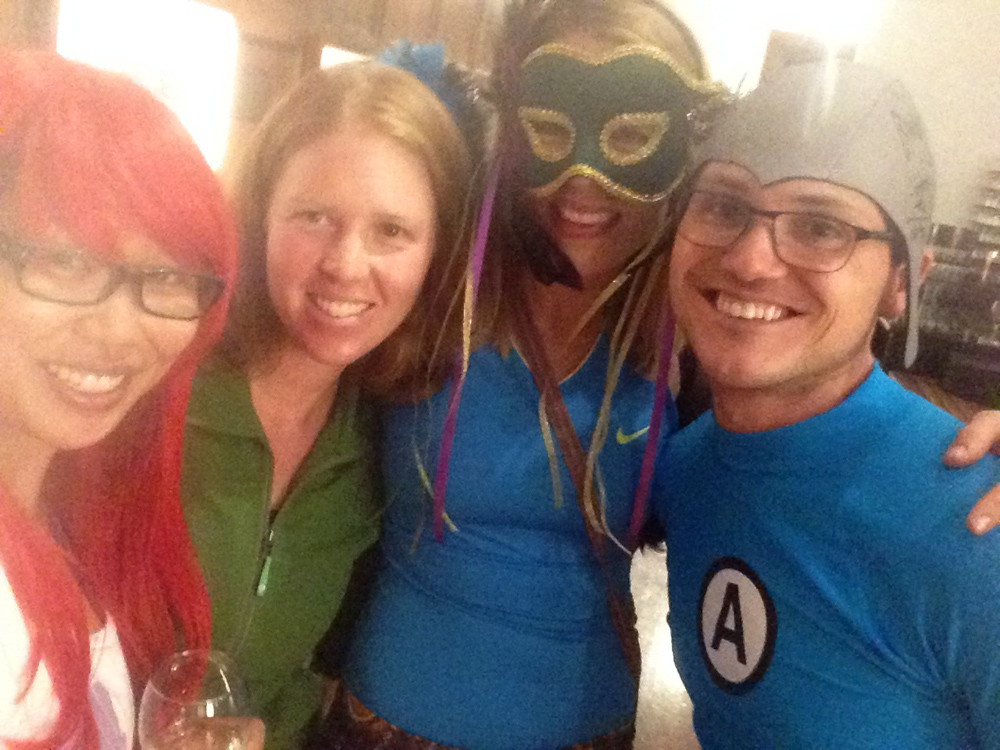 I squeezed into the frame with gem, Jai, and Kel for this great photo. 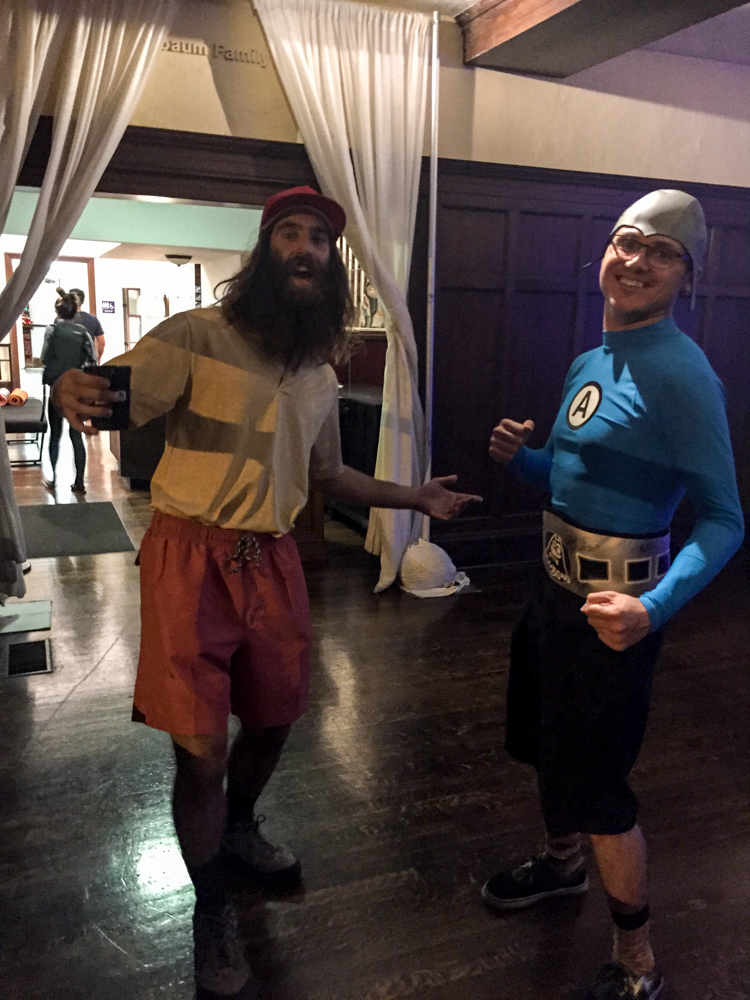 Last but not least, I danced with Forrest Gump (JT). Such an awesome costume!

It was a super fun evening. Besides yoga and taking photos, there was also some wine and champagne, great music, and lots of socializing. DJ Dory was there, playing music for the outdoor flow and the party afterwards. I also made some new friends, talking about yoga, working out, music, dancing, and more. Yay for new friends! I’m thankful to everyone who helped make it what it was, including staff and attendees alike!

(But sorry to my other friends at Rita’s party that I didn’t see, heh. I was too sleepy.)