In Reached, many questions about the Society, the Rising, and other peoples are finally answered. The title and cover art are very appropriate with Casia breaking free in her red dress. In fact, if you’ve never paid attention to the covers to the previous books, you really should!

Things don’t go as smoothly for everyone as they would have liked, and there are some large changes in play for the population. I repeatedly wondered how there could be a happy ending for everyone. This is something that plagues any story of a love triangle in which you care about all three. Not every character gets his or her happy ending, but many do.

Condie answers a lot of questions, but she leaves some unanswered. She does, however, reinforce Casia’s grandfather’s statement that it’s okay to wonder. Are there other far away countries, and if so, what are they like? What’s the final outcome? Casia’s story comes to a nice conclusion by the end, but everything isn’t spelled out for the reader. There’s plenty more about which to wonder, which is, I suspect, just how Condie wants it.

And who knows? Maybe she’ll write more in this universe!

Scalzi’s seventh episode of The Human Division, The Dog King, returns to the main characters of the novel, Wilson, Schmidt, and friends. When the diplomatic team gets a new assignment and Wilson is assigned to watching a dog, he gets into a bit of trouble.

The episodic nature of the Human Division allows Scalzi to use a different tone in each episode. While the novel and the Old Man’s War series as a whole has always had some humor, the Dog King seems like more a comedy than previous episodes. I think it’s great that with the Human Division we get a variety of types of episodes. Consider that “Everyone dissolved into a puddle of awwwww” is an actual sentence you can read by experiencing the Dog King. Awesome, right?

Following the dysopian future shown in Matched, Crossed explores the fringes of that society. More importantly, it shows what’s outside of that. While it was exciting, a story becomes less dystopian once it’s outside of the society proper.

When I discussed Matched, I compared it to other novels in the same genre. The series especially reminded me of The Hunger Games. Fortunately, things deviated. First, there was the secret. I won’t give it away, but it raises the tensions a bit. Second, the ending of Crossed definitely paves the way for Reached, the final book, to be quite exciting (and different)!

With the sixth episode of the Human Division, Scalzi finally gave me what I really wanted. He showed me the Conclave.

While the Back Channel shows humans as well, it really showcases alien members of the Conclave and the Conclave itself as a political unit. More than anything in the Old Man’s War universe, that’s what I wanted to see next, so I was thrilled to find myself before a large political body of the Conclave.

The Back Channel raises some tension in the story while reaffirming that while the Conclave might be at odds with the Colonial Union, they’re not villains (at least not to the readers). Without giving anything away, we also see that we still have a missing puzzle piece.

I finished Matched by Ally Condie this morning. Matched is a dystopian teen novel. I caught glimpses of The Giver in it but also a lot of the Hunger Games, which was published two years earlier, as well.

Cassia is a member of the Society. Everything seems to be going normally for her when she’s matched for marriage by the Officials just as all married persons are. However, things start to go awry as she develops feelings for another and begins to see the flaws of her Society.

Dystopian fiction is always particularly interesting to me. Besides making for entertaining stories, they serve as philosophical thinking points. What if the government could predict things so accurately that they take all the guesswork out of life? Would that be good? What if they could eliminate most suffering, but it came at a cost? I particularly liked seeing what culture was destroyed in this future and what culture was preserved.

Compared to other similar works, Matched takes place in a nation that seems a little more connected than most. Family members communicate despite being far away, and people still take trips in planes. In fact, vacations to distant places are even mentioned once. At the same time, things seem even more restricted in Matched than in others of its genre. I could see it almost being accepted more easily by the population than the civilizations in similar novels, which makes it that much more interesting.

Luckily for me, the sequel, Crossed, and its sequel, Reached, are already released. I know what’s next for me. 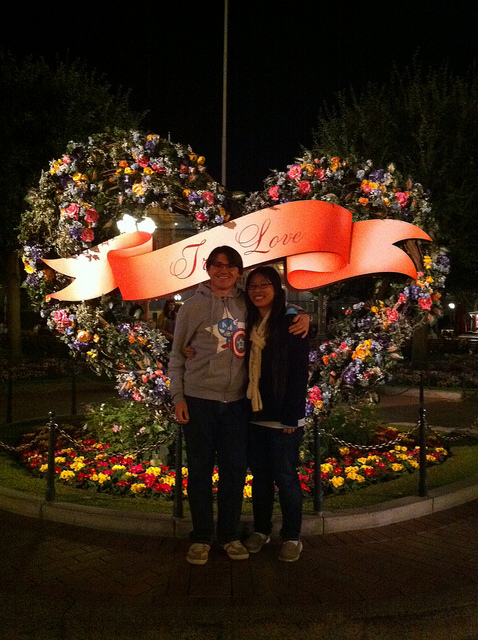 Our Disneyland Annual Passports are expiring, and thanks to the holiday weekend, Friday was the last day we could go that wasn’t a blockout day. We managed to go the Matterhorn Bobsleds for the first time since it reopened, which was a relief. gem really wanted to go on it last time we were at Disneyland, but they kept closing it temporarily.

We also went on Star Tours a number of times. Since it reopened as Star Tours: The Adventures Continue, we always get the same second scene, Naboo. We’d seen both introductions, two of the three first scenes (never having seen Kashyyyk, two of three transmissions (never having seen Yoda), and only Naboo for the final scene. We decided to spend our final time at Disneyland going on Star Tours again and again in an attempt to see the rest. We got to see Kashyyyk, which was cool, and finally, on our last ride, we saw the Death Star in the final scene. No, we never did manage to travel to Coruscant, but this will give me something to do in the future!

The fireworks show was cancelled, so we didn’t get to watch that unfortunately. We did, however, get an apple pie caramel apple. Then, on our way out of the park, we stopped at the front to get our picture in front of the “True Love” sign!

I miss my annual passport already. I don’t want to spend the money on it right now, but I doubt I can stay away for too long.

Tales From the Clarke continues Scalzi wonderful episodic The Human Division. This time we see a familiar face from the first episode, Captain Coloma. Scalzi chooses a great protagonist by following a character with whom we’re already familiar but who was not a major character.

She’s tasked with showing off an old ship to delegates from Earth. The Colonial Union wants to rebuild Earth’s trust, so this is a critical mission. However, everything isn’t as it seems. By the end we see some resolution but with more tantalizing questions to propel us into the remaining episodes of The Human Division.

A Voice in the Wilderness is another side-story to the overall arc of The Human Division (and a great one at that). For the first time, Scalzi shows us what everyday life is like on Earth. Episode 4 follows a political commentator on Earth and shows us some of the conversations surrounding Earth’s relationships with the Colonial Union and the Conclave. It’s extremely fascinating and something we haven’t seen in the Old Man’s War universe previously.

This episode provides great content for the current state of humanity in the universe. As might be expected by an episode still early in the total work, however, it also leaves us with questions. I’m anxious to find the answers to those questions in future episodes. A Voice in the Wilderness is easily worth the $0.99, and I’m thoroughly enjoying the episodic format of The Human Division!

Reposted from my Goodreads.

The B-Team marks John Scalzi’s return to his Old Man’s War universe, the series for which he’s most known. Set after the events of The Last Colony and Zoe’s Tale, it tells of a Colonial Union team sent to repair a diplomatic mission gone wrong. While it seems enjoyable without knowledge of the previous books in the series, it would also spoil them. I highly recommend reading the rest of the series first. Readers familiar with the series should enjoy seeing the ramifications of Perry and Sagan’s actions and those of the Conclave.

The B-Team is the first episode of The Human Division, which will be released as one collected book shortly. It’s comprised of thirteen short stories considered episodes of a whole. The B-Team was released on Tuesday, January 15, and a new episode will be releasing every Tuesday until the entire story is published. This reminds me of serialized novels in the past; however, those only worked as a while novel. The Human Division actually consists of stand-alone episodes. It’s a short story collection with an over-arching (presumably) story. This seems like an evolution of Scalzi’s last novel, Redshirts, which he considered a novel with three codas.

The B-Team follows all new characters in the Old Man’s War universe but was still very exciting. The political landscape of the universe was changed significantly at the end of the last Old Man’s War novel, and it’s nice to see those changes. I’m looking forward to the remaining episodes!