Friday and Saturday provided a great start to my weekend. I began Friday evening with a martini with the “Beet” that was infused and given as a gift to me by my friends. I did have to buy martini glasses and some other things, but it was worth it. Duncan was going to Dave & Buster’s for drinks with some friends, so I went with them. I definitely had a good time. 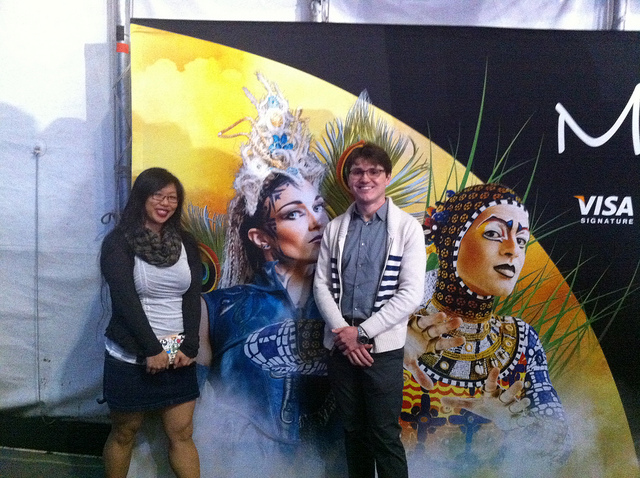 Totem was an amazing show. There’s not much of a reason to explicitly recommend seeing it, because I’d always recommend all Cirque du Soleil shows. I particularly enjoyed the ring and trapeze artists. Their strength (and balance and coordination) is just amazing. Before the show when some of the artists were interacting with the audience, one, who I’ll call the ringmaster although I’m not sure it’s accurate, was near us. Everytime the ringmaster looked our way, gem would wave enthusiastically. When he got closer and was a few rows from us, he almost walked away, but after gem waved again, he came over to us. He got really close to her until his nose touched her nose. After a few seconds he jerked back and booped her nose, attempting to put a clown nose on her. It didn’t stay, so he tried again, slower, and then told her she a small nose. She lifted her glasses, pushed the nose on, and then lower the glasses on it. During the show, every time the ringmaster came on stage, gem would whisper, “that’s my buddy!” And that’s how gem got her clown nose! We went to Zenko Sushi for dinner. I finally took back my rightful mayorship of the restaurant on Foursquare from “B.” The waitress missed my glass when refilling my water, getting my shirt pretty soaked as well as my pants and phone. Everything was okay; she was very apologetic, and I really didn’t mind too much. She gave me dessert for free – deep fried green tea ice cream! It was very delicious.

I somehow doubt Sunday can live up to Friday and Saturday.