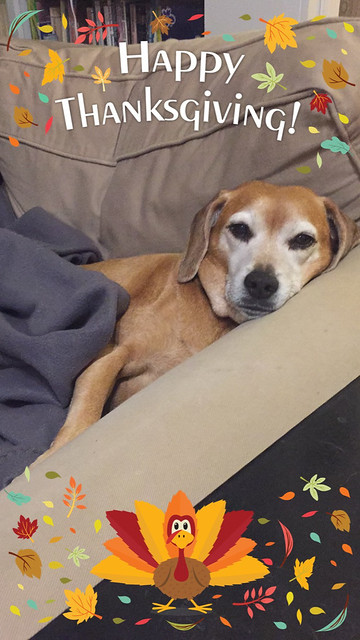 This might not have been a Thanksgiving spent in Hawaii, but it was still nice and fairly packed full of action. I spent most of Wednesday evening attempting to create pumpkin pie blondies. While I’ll still eat them, I’d say they didn’t work out. Oh well! Thanksgiving morning I woke up at 4 to get an early start and to drive Anela to LAX. On the way home, I stopped by my dad’s to say hello and then headed home for a nap. In the afternoon, I went to my aunt’s in Redondo Beach for Thanksgiving. That’s her dog, Tommy, at the top. 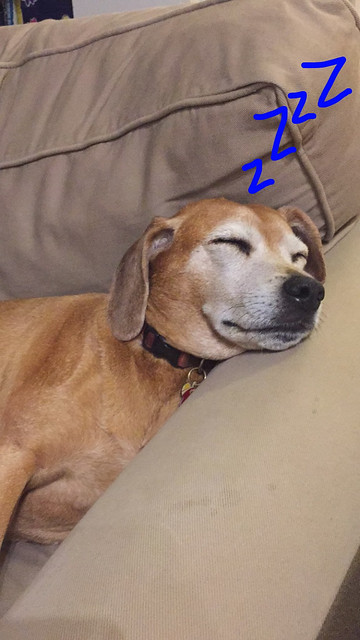 He was pretty freakin’ adorable. I spent the evening with my aunt, uncle, and two cousins. It’s been great getting to know my cousins as young adults. Usually my mom, stepdad, and sometimes brother come too, but this year they didn’t come. I found out that Mom and Pete were painting the house this weekend instead. Oh well. We had a delicious meal, watching Jurassic World and Shark Tank, and played Bananagrams, Rummikub, and Triominos. My cousin Haley left fairly late in the evening to do Black Friday shopping. I didn’t even realize that stores were open at midnight. It seemed crazy to me. More on this very soon… 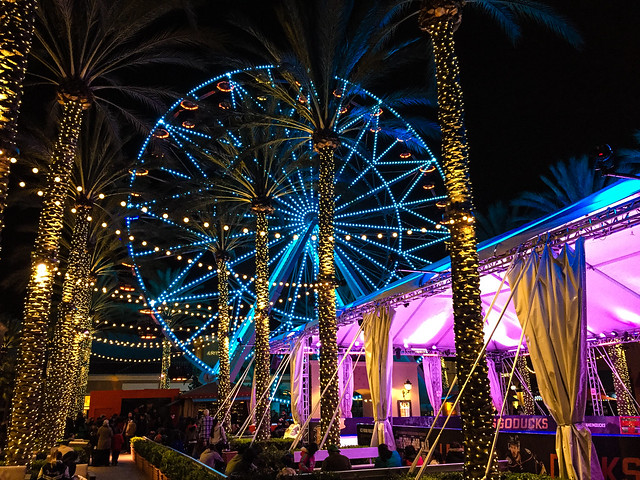 I left a little after 11 for Irvine. After getting home, I met with gem. For Black Friday from midnight to 8 AM, Spectrum was going to have free carousel and Ferris wheel rides. Now that I knew stores were open at midnight, it made much more sense. 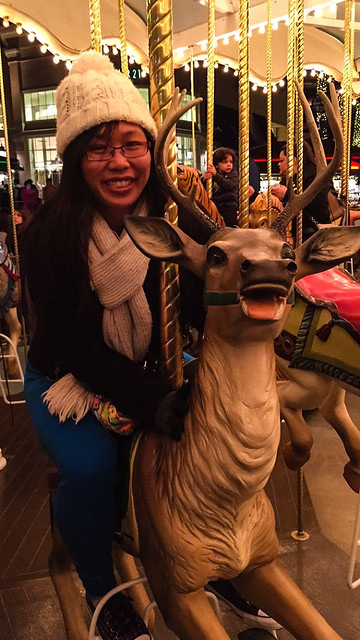 We started with the carousel ride, which was right next to a live DJ. Fun! 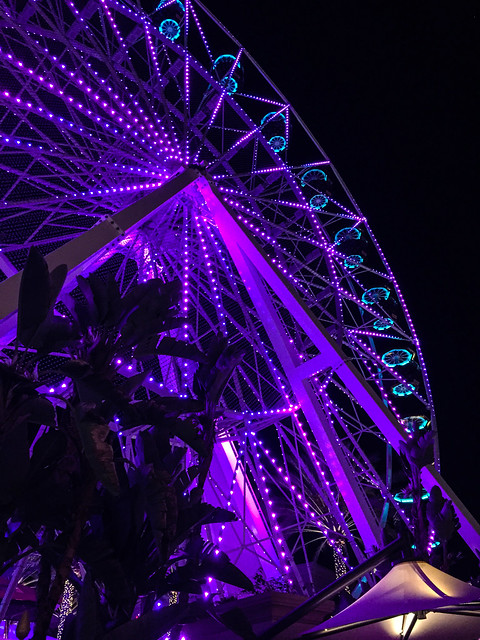 Next up was the Ferris wheel. It was freezing, but it was fun! There was free ice skating as well, but we decided it was too cold for that. We went to Macy’s to look for a bathroom, and next thing I knew, we were shopping. I had to send a Snapchat to Haley. Just a few hours earlier, I thought Black Friday shopping at night was silly, yet here I was, 3 in the morning, sucked into stores. I didn’t buy anything though. 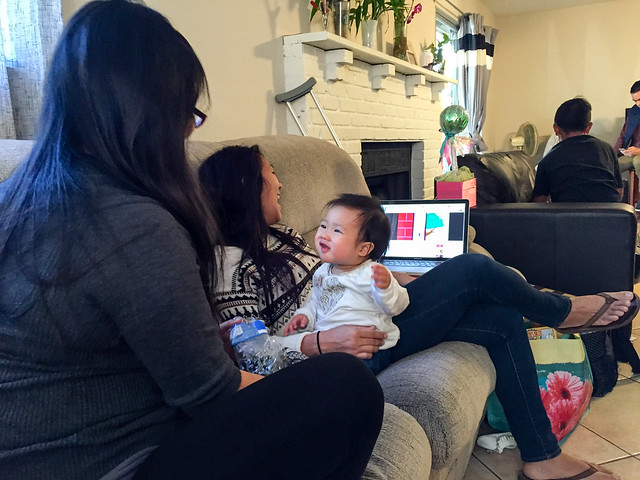 After a short night of sleep, I went with gem to her parents’ for a large Thanksgiving meal. Here’s gem’s niece, Selah, laughing. She’s beautiful! I’d seen photos of her, but this was my first time meeting her. How lucky I was! 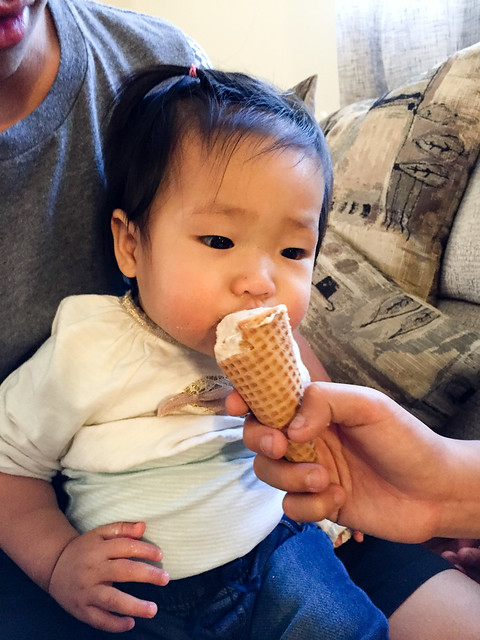 Selah liked gem’s homemade ice cream. Was that the Earl Grey or the apple pie? No idea. 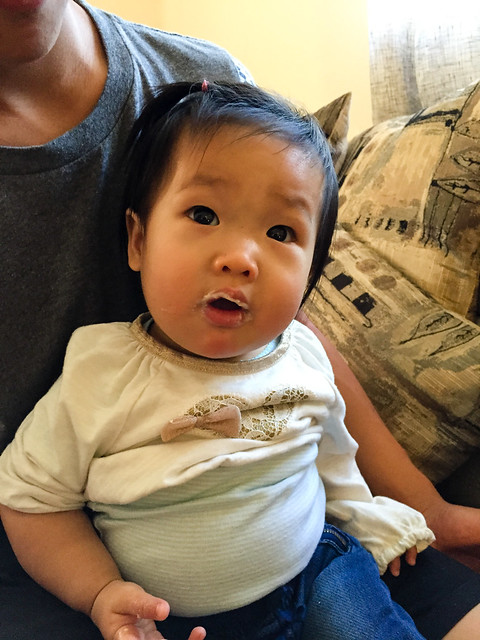 She got a little on her face! 🙂 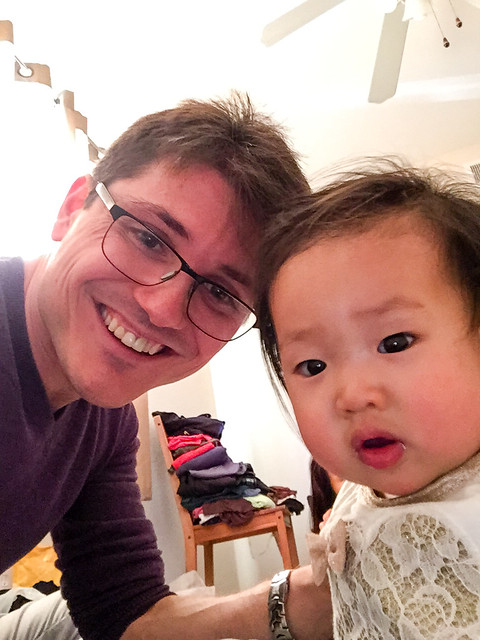 She likes playing with phones and seemed to like the camera. We took this selfie! I was careful to ensure she didn’t call 911. She did that recently at their house. 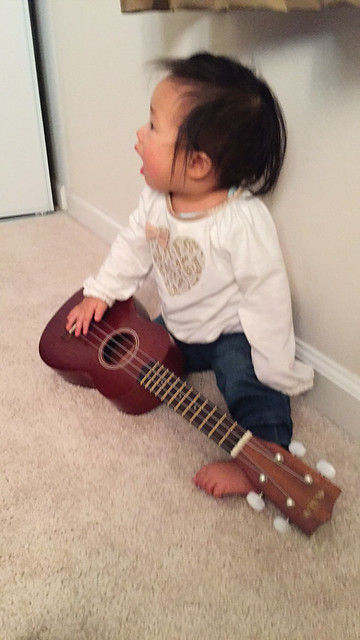 Here’s Selah playing with gem’s ukulele. She hit it like a drum, but when she held it up to smash it down, gem took it away. She’s so adorable! 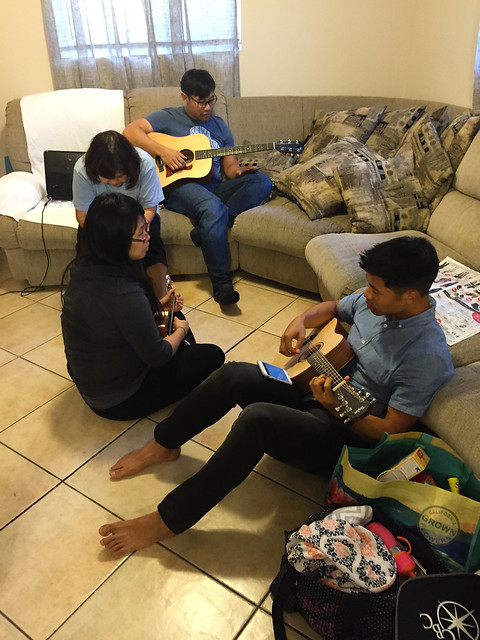 I played two games of chess with gem’s nephew, Caleb. He kicked my butt. gem and her brothers had a family jam session too! I thought that was really cool. 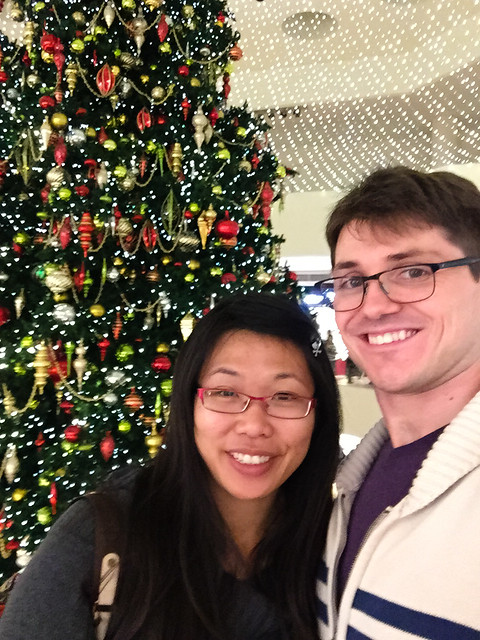 After that? Black Friday shopping again somehow. There’s nothing I really want in particular, and nothing jumped out at me, but it was still fun. 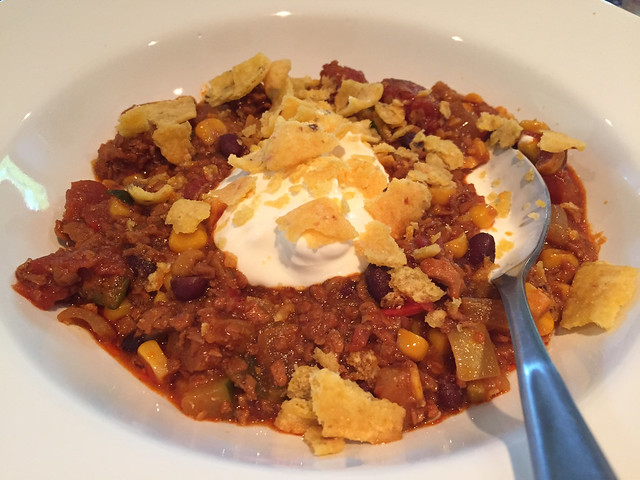 On Saturday, I visited my mom, Pete, and James. I had offered to help paint the house, but they actually had finished. We played Scrabble and ate chili. Yum! 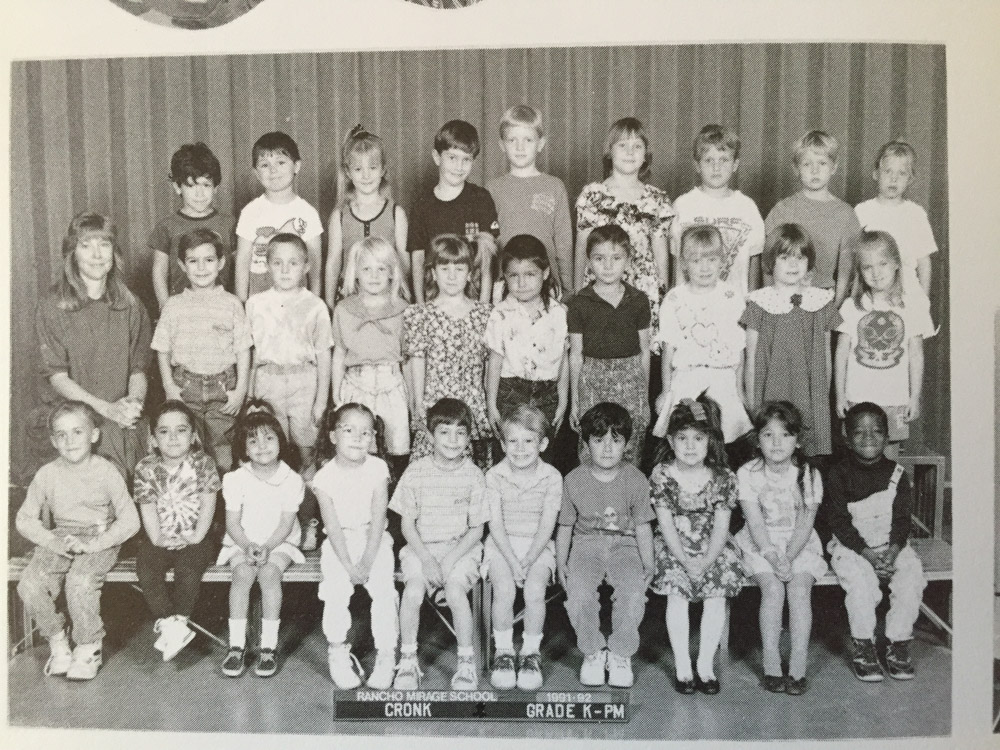 We also came across some old school photos. Can you find me? This is from kindergarten. 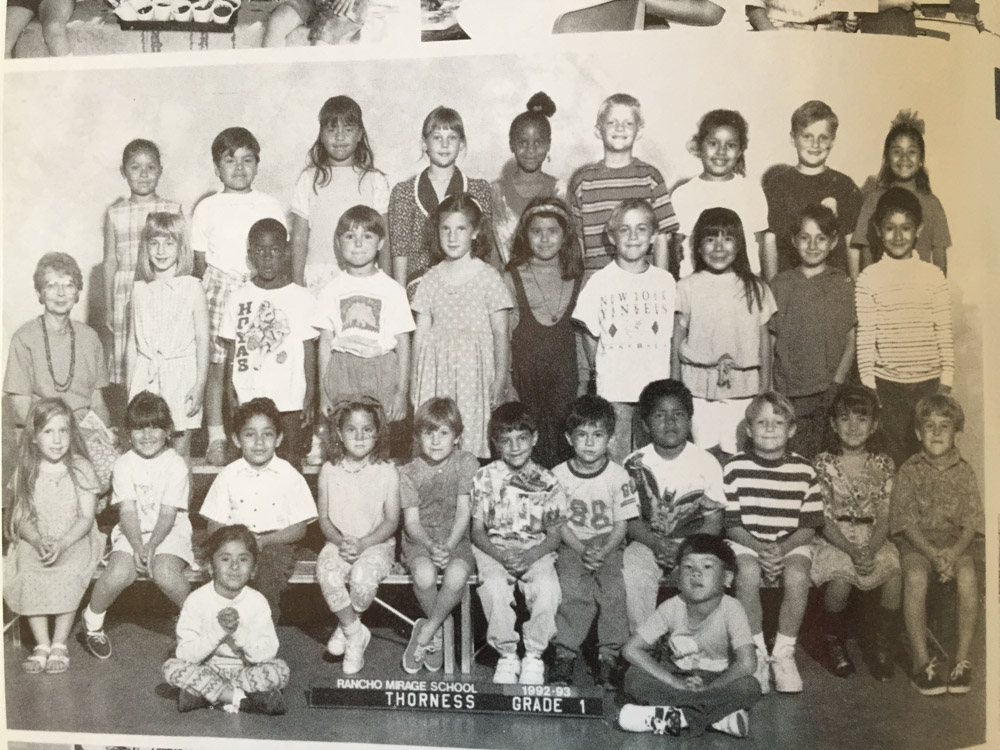 And this one is from first grade. Later Saturday night I read some of Aeneid, finished Iphigenia at Aulis, and watched Big Hero 6. Exciting evening! 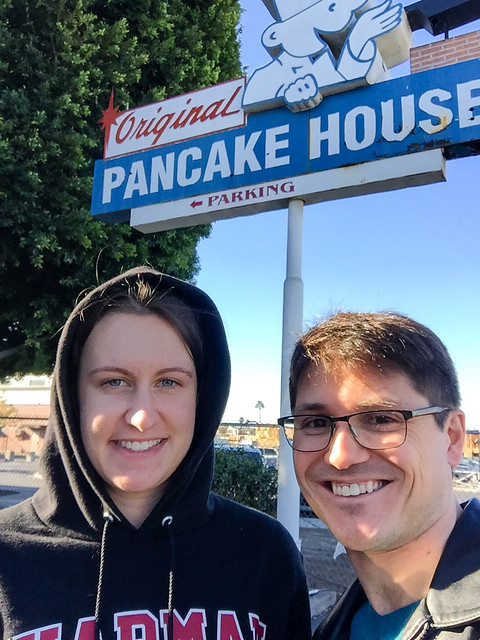 Sunday morning I awoke early to pick up Anela from LAX. I actually drove over 350 miles this weekend, which is impressive considering I didn’t actually go out of town. On the way home, we stopped at Original Pancake House for breakfast! We had blueberry pancakes and Swedish pancakes. Tasty tasty. 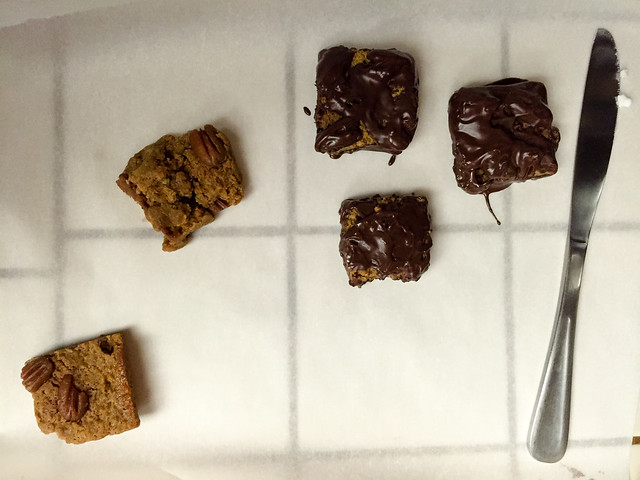 In the evening, I finished the weekend by eating leftovers and watching Frozen with gem. We also had these treats! I baked pumpkin pie blondies recently. They tasted decent though they were too strong and too soft and mushy. I considered them failures. gem thought to cover them in dark chocolate. It was a nice improvement; they were much tastier!