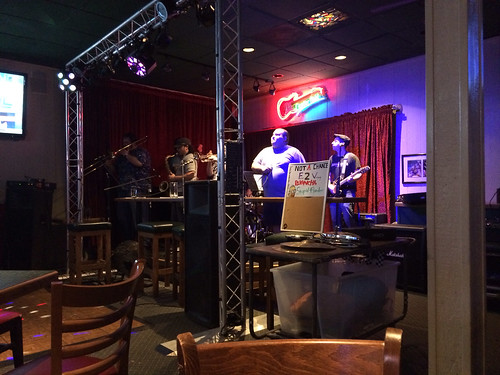 Friday night was Ska & Punk Night 5 at Centerfield Sports Bar & Grill in Huntington Beach. Half Past Two posted about it, which is how I found out. Stupid Flanders was headlining, and somehow they didn’t actually post about it until after Half Past Two despite HP2 not performing in it.

The line up was Not A Chance, Failed to Victory, Revancha, and Stupid Flanders, with Stupid Flanders being the only band I’d seen. Not A Chance, a punk band, played first. I noticed that Max, guitarist and vocalist for HP2, was there, so I said hello between sets. gem and I ended up joining him.

Failed to Victory is pictured at the top. For some reason, my clip of them won’t upload to YouTube and has no audio when I try to play it on my PC.

It’s fine on my phone and on Instragram though.

Despite a long wait as they fixed a blown out amp, F2V was really good! Unfortunately, it got so late that we didn’t stay for Revancha or Stupid Flanders, but I’m really glad to have learned about Failed to Victory. Plus it was cool to hang out with Max!