It seems crazy that it’s been over two months since this trip and I’m just writing about it now. Patrick and Caroline got married on Saturday, May 18, 2013. gem and I headed to San Francisco on Thursday, May 16, 2013. I’m sorry this is so late!

We picked up a rental car early in the morning from Pilot Travel Center and headed up toward San Francisco. gem wanted to ensure we got a photo of a freeway sign that said San Francisco, and you can see at the top of this post. We stopped for lunch at Pea Soup Andersen’s. Pea Soup is great, right? Well, the split pea soup was decent (but not amazing like some Foursquare tips implied). The hot wings were delicious despite being breaded, and the restaurant had very clean bathrooms too. It was a nice lunch.

We checked-in at the Travelodge Golden Gate, which was small but very clean. I was happy with it. Being close to the Golden Gate Bridge, we decided to walk to the bridge to see it. As it turns out, we weren’t really that close. We spent hours walking about 20 miles that day. That’s okay though, because it was amazing. 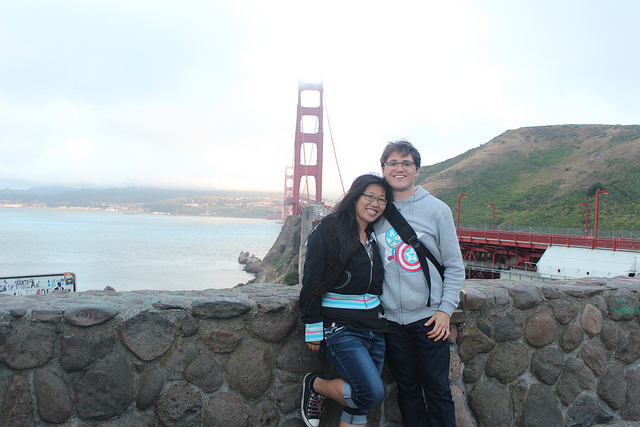 Once we got to the Golden Gate Bridge, which took a long time because we stopped for a thousand pictures, we decided to walk across it. It was offered a nice view and was a great experience. Once on the other side, we stopped for more photos with San Francisco in the background. You can’t really tell in the picture above, but we’re on the other side of the bridge in comparison to the city. After crossing the bridge again, we got this great photo of the Golden Gate Bridge in the early evening. It was beautiful. We walked around some more, heading through the Palace of Fine Arts, but because it was dark, we didn’t see much. Near our hotel we stopped at Yukol Place Thai Cuisine for some to-go. We brought it back to the room to enjoy our delicious dinner. I love Thai food. For some reason, it seems like vacation food. Even when I eat it in Orange County, it’s when we’re out doing something exciting. 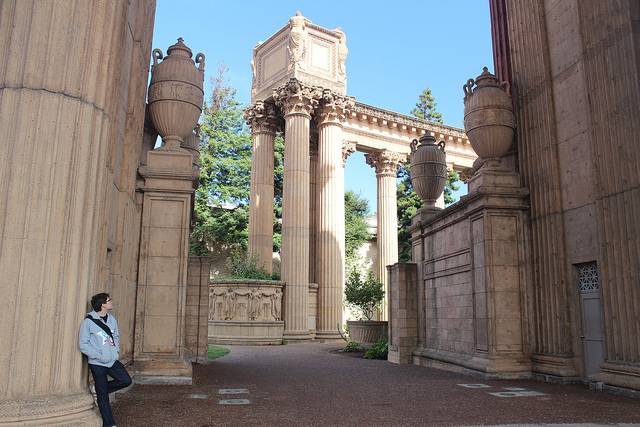 Remember how it was too dark to enjoy the Palace of the Fine Arts Thursday night? We went back on Friday. It was very impressive. After exploring that, we headed to Golden Gate Park. It’s a huge park; there’s so much to see that there was no way we could look at everything. We did spend a long afternoon walking through it, enjoying the fixtures of the park as well as the wildlife. I got really close to some sort of gopher, which was pretty sweet. There were also squirrels galore! 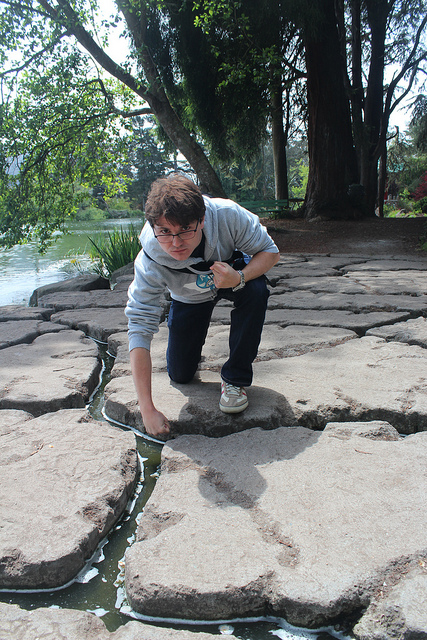 We also checked out a small portion of the de Young Museum. Really we just wanted to use the bathroom, but we looked at the gift shop too.

After leaving the park, we walked through Haight-Ashbury District. We did some shopping at Amoeba Music. We purchased Alanis Morissette’s Jagged Little Pill (because it’s a sweet album), Patience Please’s Fleeting Frequencies (because of the mellow album cover), Super Furry Animals’ Fire In My Heart (because of the artist title obviously), Super XX Man’s X (I don’t even know why), and The Postal Service’s Give Up (Deluxe 10th Anniversary Edition) (because The Postal Service are great, I wanted their new music, and I was interested in listening to the remastered versions).

We also did some browsing in the KIDROBOT store as well as the Bettie Page Clothing store. Bettie Page Clothing was inspired by 1950’s pin-up model, Bettie Page. You’d expect the woman to drag the man to a clothing store, but I actually pointed it out to gem and asked her if she wanted to check it out. I really love that style. She didn’t buy anything, but I think she enjoyed trying on some dresses (and odd shorts). I don’t have much to say about these buildings, but I thought they looked pretty. Next it was time to check out the Castro District. I’ve always heard a lot about it, but to be honest, it was nothing special. It was basically like any other town except homosexuality was accepted and celebrated. You know, sort of what every town should do. I assume this is where the World of Warcraft battleground, Twin Peaks is set. That, or it’s a bar. We didn’t stop here, but it looks pretty nice in the photos I’ve seen. We also stopped at the Hot Cookie dessert store. We bought a large chocolate covered macaroon in the shape of a certain part of the male anatomy. 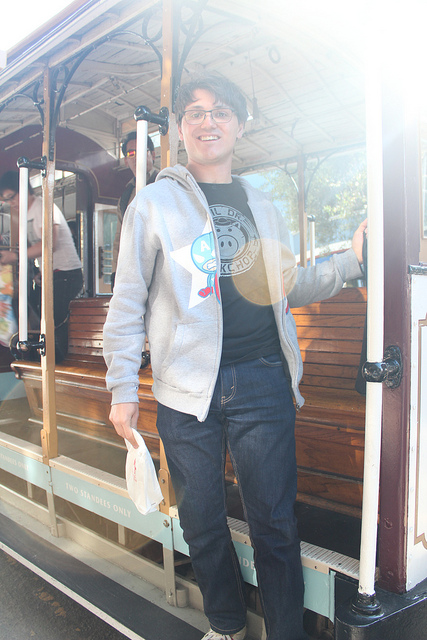 We took a modern cable car to Powell St. and then walked to Union Square. This was pretty fun for me because I stayed at the Westin St. Francis twice previously for 1C Company’s Another Night in Moscow events in 2010 and 2011. It was nice to share my experience with gem.

After looking around, we stopped at the Powell St. Cable Car Turn-Around. There were some street performers there that entertained us while we waited for a turn to hop on the cable car and head to Pier 39. That’s me on cable car in the photo above. We actually ended up a bit west of Pier 39 and had to spend a half hour or so walking, but that’s quite alright. 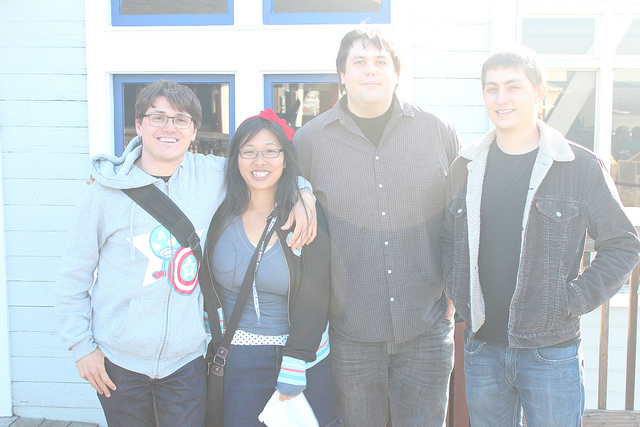 Pier 39 was the grand location of our guild meetup! And by guild meetup, I really just mean that we were meeting our guildmates Marc and Matt for the first time as well as Matt’s girlfriend, Katharine. You can see some of us in that photo. We had dinner at Neptune’s Waterfront Grill & Bar. I don’t really remember what I had, but I remember that I liked it! 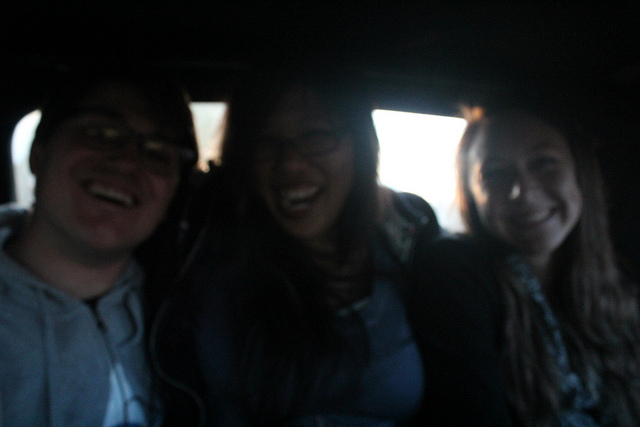 After dinner Matt took us the 21st Amendment Brewery & Restaurant. (We got cozy on the way in the car.) It was a pretty fun bar I think, but honestly, I had a good buzz going. Besides evenings where I might drink a single glass of wine, I don’t drink very often. I had two or three drinks at the 21st Amendment – a hard cider and some sort of watermelon beer, I think (sorry, I like my drinks to be tasty) and was done. It was a lot of fun. I’m really glad to have met them! In fact, I informed them of how we were now totally best friends.

On Saturday, gem tried to get her hair done at Drybar, but they couldn’t fit her in their schedule. We had lunch at a nice restaurant called Taco Bar before heading to St. Patrick’s Church. We spoke briefly with Patrick when we got there before proceeding to the pews where we saw Collin, a friend from college. I hadn’t seen him in years, so it was cool to catch up. The wedding was very nice, and Caroline looked beautiful. Between the wedding and reception, Collin, gem, and I spent some time wandering around the Metreon before Collin drove us to the reception.

Dinner was held at the Chaya Brasserie. Everything was so amazing at this restaurant! I had sushi, kabobs, fish fillet, steak, salad, chocolate desserts, and more. Seriously, it was so great. We also had a great time getting to know Patrick’s best man, James, and his girlfriend, Maggie. After dinner we went out near the Bay Bridge for professional photos of Caroline and Patrick. It was nice. When that was done, gem and I walked back to the hotel. It was a long walk, especially at nice, but nice and peaceful.

Sadly the last day of our vacation had to come eventually. On the other hand, it started with a superb lunch at Pacific Catch. We had a poke salad, shrimp taco, and baja taco with cod. It was all good. Foursquare advertised a special as well – check-in for the first time and get a dessert free. I ordered the fried dulce de leche spring rolls, and they were jaw-droppingly good. Now that I’m thinking about them again, I’m kind of sad that I can’t go eat them tonight.

Honestly, that was pretty much all we did in San Francisco on Sunday. After lunch we drop back toward Orange County, stopping a few times at McDonald’s and Starbucks for coffee. We did, however, get to listen to our new CDs! When we got back, we dropped off the car at the rental place. Antonio picked us up and we had a nice dinner at Umami Burger before heading home.