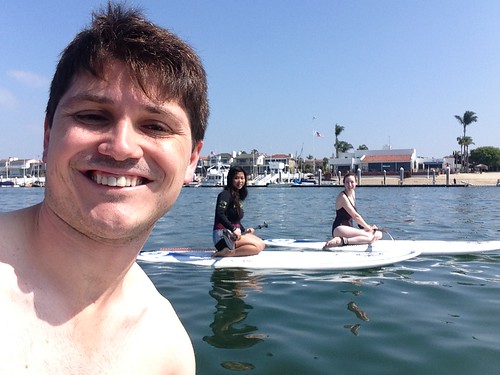 This weekend held a few fun things – like stand up paddle boarding! First, I had the wrong address number, and we drove 10 minutes out of the way. Next, we used East instead of West in the address and drove 10 minutes incorrectly again. Finally, we got to the board rental place and locked the keys in the car. We decided to worry about that later because it was time for Kaylin, gem, and I to have fun! 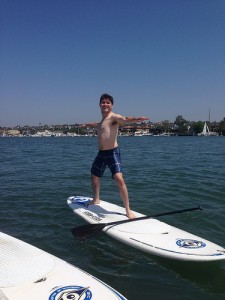 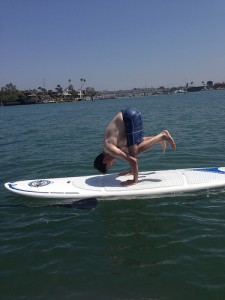 Due to wrist pain, I’ve been avoiding anything that puts pressure on my wrist, but you put a paddle board under me, and I decide I don’t care. 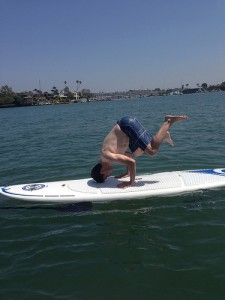 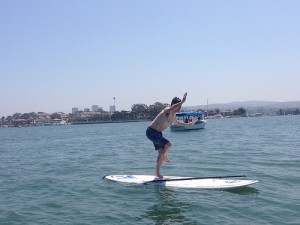 I tried for a while to balance on one foot, but I just couldn’t do it. I guess that’s no big surprise. 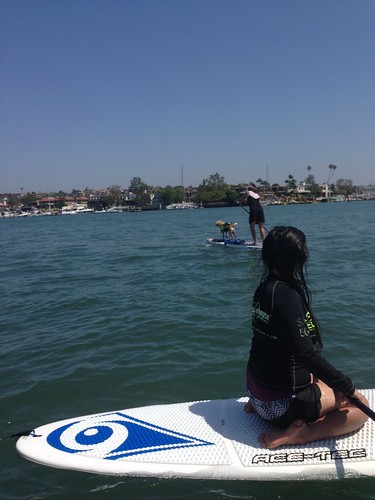 We got to see lots of cool animals while on the water such as this SUP dog! It fell off the board once while we watched and just swam back up to the board. It had a handle on its harness, so its owner just picked it up and put it back on the board. Adorable! We also some saw some birds of course as well as seals or sea lions. I can never tell the difference, but they were cute and liked to aarf. One kept trying to jump onto a boat; we watched him a fail a few times while we cheered him on, but he gave up. Another was just napping and started aarfing at us when we got too close.

It was a ton of fun! The wind picked up near the end, making us take forever to get back. We were on the water for a bit under three hours, and I guess it was a pretty good work out. Unfortunately, I did get sunburned, but gem gave me aloe from her aloe plant! When we got back to the beach, Kaylin stayed with us while figured out the keys. Hooray for AAA. 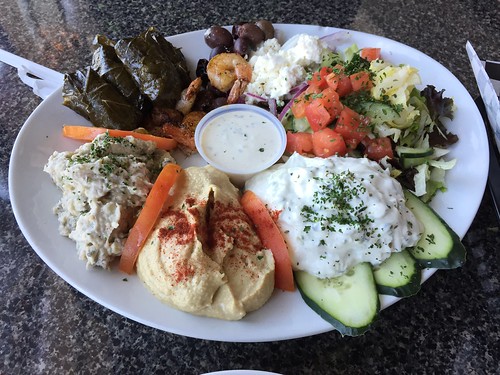 After paddle boarding, gem and I grabbed lunch at Akropolis. The Greek food was amazing! We started with this huge appetizer platter. I was really craving dolma, and this platter delivered it and more. Everything was amazing. 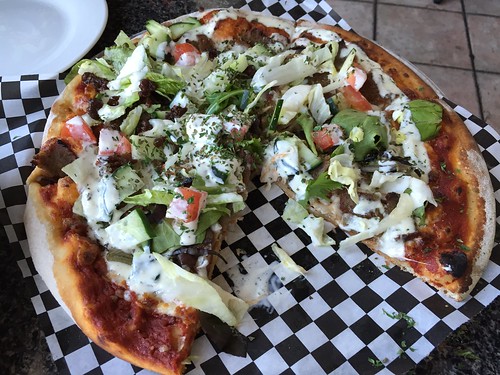 We also had a Greek pizza, which I considered the best pizza I’d ever eaten. gem said it was just because I’m hungry, but I think that’s a valid factor. Experience counts.

I also talked with the guy working there a bit. He confirmed that it was Greek owned. He’s actually half Greek and half Persian, and he asked if I was Greek because he noticed my name on my card. Neither of us were taught Greek, although he knows Farsi, which is cool! I’d love to come back here. 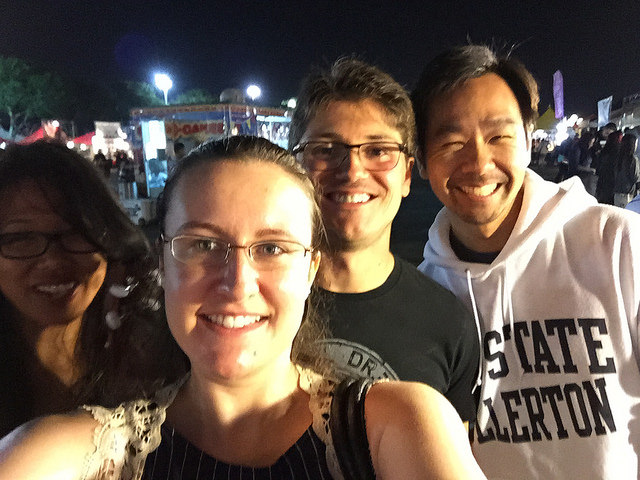 That night I went to the OC Night Market with these awesome people, gem, Anela, and Jonathan. 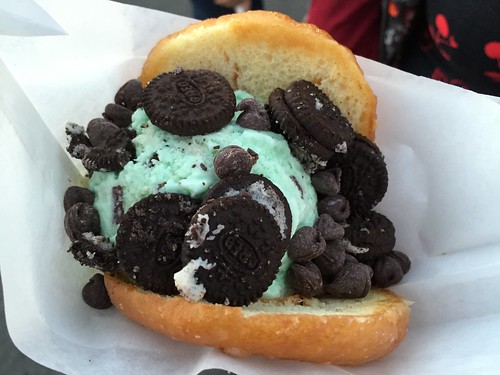 We ate a bunch of tasty things like this donut with ice cream in the middle topped with chocolate chips and mini Oreos. Actually, it was just kind of meh. I don’t think the donut added anything except unneeded carbs, and I’ve had much better mint chocolate chip ice cream. But it was fun to eat it anyways haha. We also went back to the same booth that took an hour with our order last time; this time it only took a couple minutes, and the servings were much larger! Anela craved fries, so we ended up getting curry fries, garlic crab fries, and Spam fries. We all expected the Spam fries to be fries topped with Spam, but they were more literal. It was Spam cut likes fries and fried. Yummy but salty! 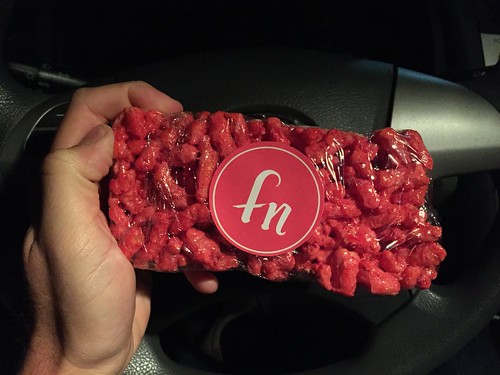 My biggest goal for the night was to find Orion’s Cookery and get their new Hot Cheetos Brick, essentially a Rice Krispies Treat made with Hot Cheetos instead of Rice Krispies. They only had two left when I bought mine. Huzzah! After my first, small bite, I thought it was a little odd – not bad but not amazing – and maybe slightly stale tasting. Then I ate more, and as I took a bigger bite, I was pretty impressed. Win! 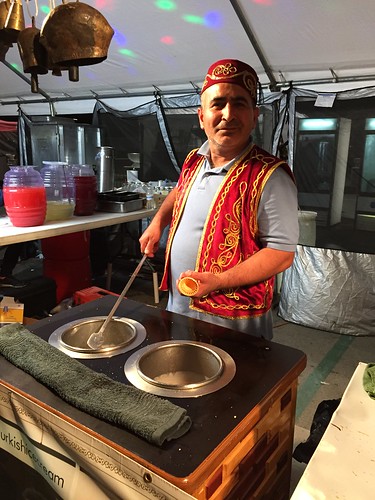 Anela wanted the Turkish ice cream, with which she was familiar. I’d never heard of it. According to Wikipedia, it’s called dondurma and is also popular in Greece as dudurmas or kaimaki. It’s thicker than normal ice cream and more resistant to melting. The vendor let me take his picture before he got our ice cream. I liked his clothes! He makes a bit of a show of serving it, which also shows off how it’s different than our typical ice cream. He’d put it in a cone, swing it around such that typical ice cream would fall from the cone, hand it to Anela, twist and grab it back, etc. It was fun! 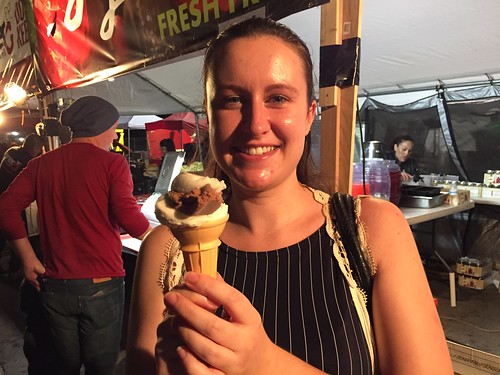 And how was it?

Tasty, tasty! I’d definitely get it again, especially given the show of it. Wikipedia also mentions that that showmanship is typical of dondurma vendors. Buy some if you get the chance!

Okay, that’s it. You can stop reading. Thanks! 🙂 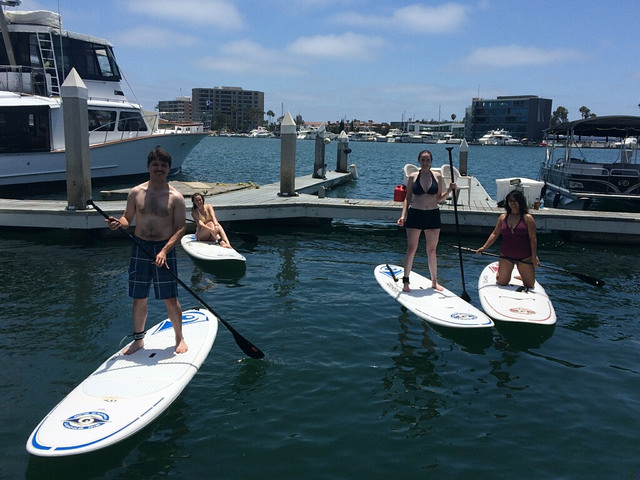 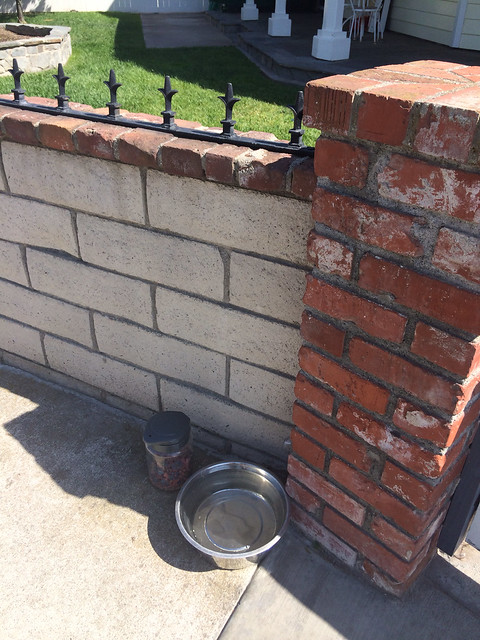 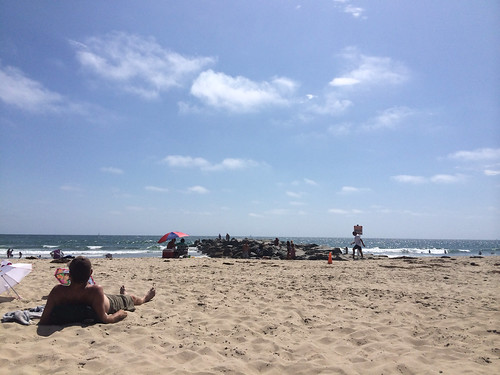 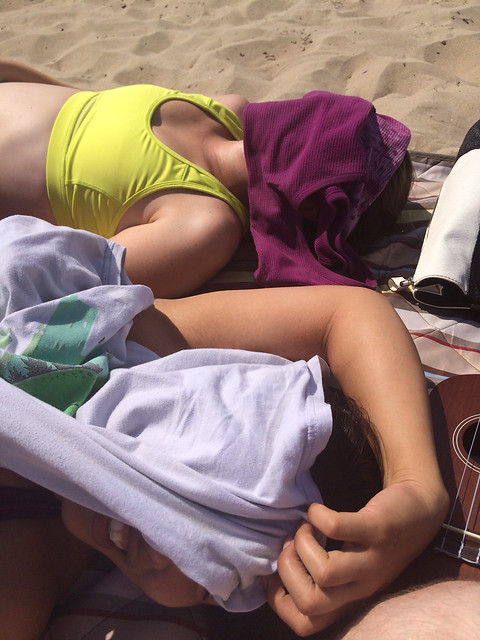 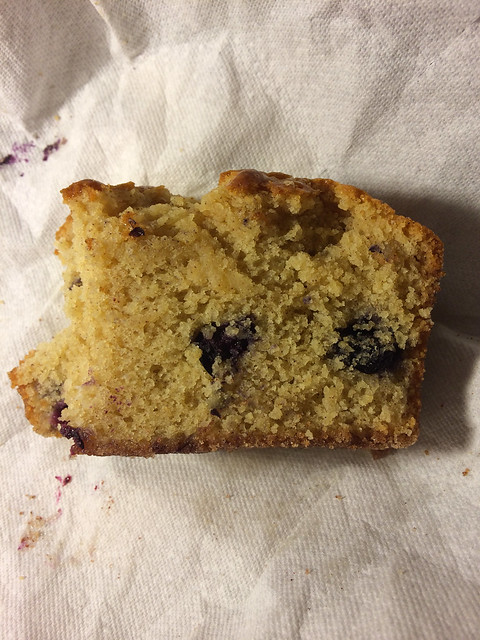