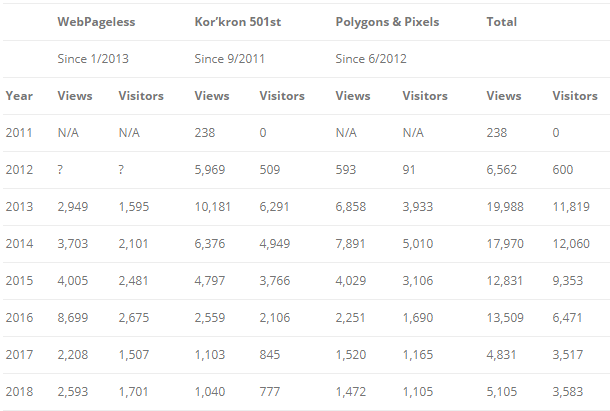 Every year I like to look at my blog stats. It seems a little pointless as I’ve practically stopped, but it’s hard for me to break tradition.

Thanks to some reminders from WordPress and Jetpack, it seems like a good time to look at blogging in 2015. They’ve put together a report you can look at here, but I think I can find some interesting numbers myself.

WebPageless got around 4000 views this year, which is approximately what my other two blogs, Kor’kron 501st and Polygons and Pixels got as well. At this point, WebPageless is the only one I update regularly; the other two are about games, and I’m not really gaming much.

Here’s the breakdowns by year:

I don’t know when Jetpack was installed on WebPageless, but it shows data for January 2013, so it must have been installed that month. January might be a little low depending on when it was installed in that month, but that’s early enough in the year that it seems fairly accurate. Also, 2015 is only off of 4,000 by 11 views. Maybe this post can push it over 4,000. Edit: It can!

I’ve also been tracking with eXTReMe Tracking on WebPageless since May 7, 2009. It tracks visitors, not views, and its calculations can be different than WordPress’ too. While it doesn’t give me as much data as I get from WordPress, as of writing this it gives me a total of 19,858 visitors.

I made 67 new posts here – much, much more than my other two blogs. I made 34 new posts on Kor’kron 501st and 28 new posts on Polygons & Pixels. That’s not really a surprise to me. Most of my posts on WebPageless are discussing cool things I’ve done, and I’ve done a lot of fun things this year.

I know the views on WebPageless are much lower, but they’re more important to me. Kor’kron 501st and Polygons and Pixels have a much stronger ability to get views from links or search results, but WebPageless is actively about me and my life. However, all three blogs get views from people I know personally, and that means a lot to me. WebPageless is such a chronicle of my life that I’d ask someone to save a copy of it if I died to give to my children, but, you know, no kids, so we’re all good. Thanks to Blessing of Kings for linking to Kor’kron 501st and being responsible for so many of my views, the Twisted Nether Blogcast for having me on their podcast in late 2014, and everyone following the story of bob’s game on Polygons & Pixels and commenting to keep me informed – Nox, Tubero, Anonymouse, and more. Most of all, I’m thankful and surprised when my friends reveal that they read. It’s harder to gather stats on people who click through from Facebook, but I see the likes. I’m surprised so many people read. (Well, and some people like without reading, I’m sure.) I get comments in person from people that reveal that they’ve seen the post. It’s amazing. Sometimes I find myself asking “does anyone even read this crap,” but I know they do, and I know that WebPageless is basically a journal. If you read it, it must mean you care about me. Thank you.

Excluding the home page and some more administrative-focused pages designed mostly for me, here are my top posts by views in 2015:

I’m sure I’ll keep blogging in 2016, so I’ll see you then! (And full disclosure, I’m planning on another post later today here.)